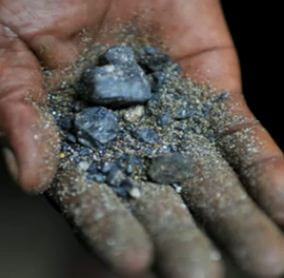 Consumers in developed nations live in a world dominated by gadgets. In our pockets, iPods and Blackberries have taken up permanent residence; in our homes, laptops and televisions are considered practically essential. Some of us may marvel at the innovative feats that have turned our cell phones into mini-computers, especially given the convenience they provide. Being unable to see or understand their inner workings can give modern electronics a magical quality, but a disturbing story hides beneath the sleek exterior of modern tech.

The production of the electronics we use requires the mining of raw materials. Four of these materials are high-value minerals: gold and the “3Ts” – tungsten, tin, and tantalum (refined coltan). Gold coats the internal wiring in the guts of your computerized devices, and tungsten is used to enable the vibrate function in cell phones. Tantalum is necessary in allowing battery-powered electronics to hold a charge when unplugged from electrical outlets. Lastly, tin is a sodder essential to the manufacture of circuit boards.  All of these resources can be found in the Democratic Republic of Congo, where militant groups smuggle and tax the appropriately-named “conflict minerals,” drawing in $183 million yearly to fund their violent operations. Since 1996, more than 5.4 million people have died as a result of ethnic warfare and struggles for the Congo’s wealth of resources. Militias such as the FDLR, which profit from the illegal sale of gold and the 3Ts, terrorize miners into laboring for them – raping local women and girls, and killing those who refuse to work. If workers are paid, the average is $1 to $5 a day, and conditions are dangerous and inhumane. Child labor is frequently employed.

Eliminating the use of conflict minerals in electronics production poses challenges, but none are insurmountable. From their war-torn origins, the mined minerals are shipped off to smelting refineries in Asia, where their mixture with other materials complicates efforts to trace them.  It would add a penny to the cost of a cell phone, however, if an auditing process were used to verify claims of ethical production from suppliers (see NYT’s “Death by Gadget”). And while no electronics companies are currently manufacturing conflict-free, increased awareness has effected some proactive legislation. The passage of a 2010 law requires that publicly-traded companies submit annual reports to the Securities and Exchange Commission on the acquisition of component metals, and what is being done to determine whether metals sourced from Congo are indeed conflict-free (LAT’s “Congo’s Conflict Minerals“).

Currently, companies that use conflict minerals are not penalized under the law. But buyers of consumer electronics have the power to demand conflict-free products from manufacturing giants. Visit RaisingHopeforCongo.org to commit to buying conflict-free and sign their web form here: www.raisehopeforcongo.org. Of the 21 largest electronics manufacturers in the world, you can buy your cell phones, computers, cameras, and other gadgets from those companies that are making the most effort to go conflict-free (and avoid those that are not).

Companies with room for improvement:

Companies that have done little or nothing to go conflict-free:

Congolese mining not only fuels bloodshed, but results in the displacement and killing of endangered gorilla populations. Militant groups pay no heed to the protected status of national parks, and the extraction of gold and the T3s destroys natural habitat (see “Guns, Money, and Cell Phones”: www.globalissues.org). The environmental impacts of our tech-thirsty consumer culture do not end with Congo, as the manufacturing of electronics is damaging regardless of mining locale. The electronics industry thrives on disposable products – gadgets that are easily tossed away in favor of their newer, faster, and fancier replacements. The resource demands that feed this cycle are immense, and consequently, so is the resulting pollution. Take, for instance, the production of a single desktop computer, which requires 240 kg of fossil fuels – roughly ten times the weight of the computer itself. To put this in perspective, the fossil fuels necessary for most other consumer goods is roughly equal to the weight of the good itself (Source). Resource extraction for electronics manufacturing occurs globally, generating huge amounts of waste and leaving environmental degradation in its wake. Below is a graphic showing some areas where this extraction is most significant, and what materials are sought after:

These materials must be processed in factories before they can become the component parts of our electronics, exposing workers to toxic solvents, flame retardants, and mercury. While this labor is now largely outsourced, it once occurred in our own backyards. According to a Johns Hopkins study in 1992, female IBM employees in Silicon Valley suffered high rates of miscarriage that were correlated with solvent exposure in computer chip manufacturing – 2.8 times greater than those who were unexposed (see storyofstuff.org and www.deseretnews.com). These days, the poisonous chemicals are handled mostly by workers in developing countries. The average computer workstation contains over 700 compounds, of which many are harmful: lead, cadmium, barium, bromine, and carbon black, to name a few (Source). Upon reaching the end of their lifespan, most spent electronics return to those nations in which they were processed, such as India and China, completing the toxic exposure cycle during disassembly. The U.S. alone generates 3 million tons of electronic waste yearly, and the EPA estimates that trashed tech is growing at two to three times the rate of any other waste source (Source 1&2).  Of the measly 13% that is collected for recycling, roughly 50-80% is shipped overseas. In Mustafabad, India, citizens attempt to scratch out a living by burning this “E-Waste” into its constituent minerals, allowing vaporized solvents, flame retardants, and even acid to be breathed in. Sadly, children will often participate in this dangerous activity.

Some manufacturers are making progress, implementing “takeback” programs in an effort to recycle E-Waste more responsibly. The Electronics TakeBack Coalition has compiled a recycling “report card” for major electronics companies and retailers here, so consumers can make informed decisions about which ones to support: www.electronicstakeback.com. To ensure that your electronic devices are properly recycled – and not dumped in developing countries – look for an E-Stewards recycler here: e-stewards.org.

BSR Conference 2011- A broad range of companies are beginning to face conflict mineral reporting requirements. The question remains how best to go about integrating this issue into supply chain sustainability programs and gather needed information, no matter where a company sits in the supply chain. This session will use specific industry case studies in a workshop format to lay out some of the challenges that companies face and how they might develop solutions. November 2 – San Fran. www.bsr.org

1) Overview of Conflict Minerals, from The Enough Project’s Raise Hope for Congo: www.raisehopeforcongo.org
2) How a certification process can eliminate the use of conflict minerals: “Certification: the Path to Conflict-Free Minerals in Congo.” Sasha Lezhnev and David Sullivan, 2011. The Enough Project: enoughproject.org
3) GoodGuide’s guide to buying an ethically-produced cell phone, based on social, environmental, and health analyses: www.goodguide.com
4) Wall Street Journal article from this April on the conflict mineral disclosure legislation: wsj.com
5) Recycle it Right: the Electronic TakeBack Coalition’s guide to recycling your electronics: www.electronicstakeback.com