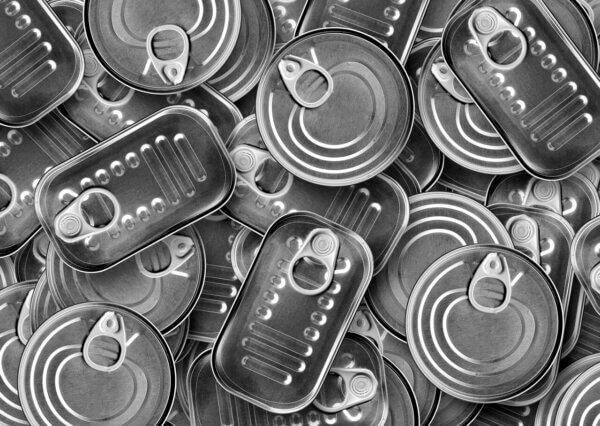 According to Bloomberg News, 4.7 million metric tons of BPA valued at about $8 billion was produced in 2012. The chemical has been linked to birth defects and decreased social activity that spans generations.

NOTE: MANY OF THESE BRANDS HAVE UPDATED THEIR POLICIES SINCE THE POST WAS WRITTEN – IF YOU KNOW OF AN INACCURACY ON THIS PAGE, PLEASE REPORT IT IN THE COMMENTS.

These Brands Use BPA Free Cans

Amy’s:  All products. Most-popular are their lentil soup, refried beans, and chili.

Beach Cliff:  All canned fish, including fish steaks and sardines.

Bearitos:  All products, people like their organic, vegetarian refried beans.

Bumble Bee: Tuna and sardines canned in the US.

Cento: All products. Best-known for their canned tomatoes.

Farmer’s Market:  All products, including their popular organic pumpkin.

Hunt’s Tomato Products:  Their popular tomato sauce and tomato paste are in BPA-free cans. Their plain tomatoes are lined with vinyl.

Juanita’s:  All canned foods, including their popular menudo and hominy.

Muir Glen:  All products. Their crushed tomatoes with basil are Amazon’s #1 best-seller.

Pillar Rock:  All canned fish, known for their canned salmon.

Raincoast Trading:  All canned fish. Their solid white albacore tuna is a big seller after Andrew Zimmern toured the factory on Travel Channel.

These Brands’ Cans Sometimes Have BPA

Whole Foods: Some ‘365 Everyday Value’ beans and other products not listed above.

Brands to Avoid — All Use BPA Cans

To look up a particular product see: ewg.org/foodscores

Other BPA Items to Avoid

BPA is found in:

In 2009 The Environmental Working Group detected BPA in 9 of 10 samples of umbilical cord blood it collected from newborns and in 2007 put out a study showing that BPA exposure is ‘unsafe’ in 11 percent of all canned food.

At the EWG’s urging the FDA Office of Food Additive Safety tested cans for BPA in 2011 and found that 71 of 78 canned foods tested were tainted with BPA. In both the EWG and FDA studies, green beans were the most heavily contaminated. In the FDA tests, a single serving of beans contained as much as 730 parts per billion BPA. In the cans the EWG tested, the EWG found a single serving contained enough BPA to expose a woman or infant to levels more than 200 times the government’s safe level of exposure for industrial chemicals.

In the 2010 study, ‘No Silver Lining‘, food from 50 cans collected from 19 US states and Ontario, Canada were tested for BPA contamination. Over 90% of the cans tested had detectable levels of BPA, and some at much higher levels than had been detected previously. The study’s tests show that meals involving one or more cans of food can “cause a pregnant woman to ingest levels of BPA that have been shown to cause health effects in developing fetuses in laboratory animal studies.” Consumer Reports’ latest tests of canned foods found that almost all of the 19 name-brand foods they tested contain some BPA. “A 165-pound adult eating one serving of canned green beans from their sample, could ingest about 0.2 micrograms of BPA per kilogram of body weight per day, about 80 times higher than the experts’ recommended daily upper limit.”

The Breast Cancer Fund released a product testing report called BPA in Thanksgiving Canned Food. For the study canned goods were purchased in California, Massachusetts, New York and Minnesota. Four cans of each of the common Thanksgiving staples: Campbell’s Cream of Mushroom Soup, Campbell’s Turkey Gravy, Carnation Evaporated Milk (by Nestle), Del Monte Fresh Cut Sweet Corn (Cream Style), Green Giant Cut Green Beans (by General Mills), Libby’s Pumpkin (by Nestle) and Ocean Spray Jellied Cranberry Sauce were purchased. The results showed a tremendous variability in BPA levels in the canned foods tested, from non-detectable to 221 parts per billion. Variability was extreme even among cans of the same product made by the same company, which means that consumers have no way of knowing how much BPA is in the canned food they’re buying and consuming. breastcancerfund.org

A 2011 study by Harvard University found much higher levels of BPA in people who ate canned soup. Researchers analyzed the urine of seventy-five people for BPA. Each participant ate a 12-ounce serving of either fresh or canned soup for five days in a row. They were advised not to otherwise alter their regular eating habits. After a two-day break, the groups switched and ate the opposite type of soup. The study showed the canned soup eaters had 1,221 per cent higher levels of BPA in their urine than those who ate the fresh soup.

An August, 2012 study out of the University of Virginia, shows that low dose BPA is associated with decreased social activity in mice for up to four generations!

In September, 2012 a Washington State University researcher and colleagues have found that BPA disrupts female rhesus monkey’s reproductive systems, causing chromosome damage, miscarriages and birth defects. Again the research shows the effects to be generational. Patricia Hunt, the head researcher says “the really stunning thing about the effect is we’re dosing grandma, it’s crossing the placenta and hitting her developing eggs, and if that fetus is a female, it’s changing the likelihood that that female is going to ovulate normal eggs. It’s a three-for-one hit.” The rhesus’ reproductive system are most human-like of any mammal and were tested with BPA levels similar to those in humans.

Since 1999 Eden Foods has used steel cans coated with a ‘baked-on oleoresinous c-enamel’, which does not contain BPA. Oleoresin is a non-toxic mixture of oil and resin extracted from plants, such as pine or balsam fir.’ The cost is currently 2.2 cents more (14%) than cans with industry-standard BPA epoxy liners. Yet that natural liner is not approved by the FDA for acid foods, such as tomatoes.

Hopefully in the very near future, alternative liners will be put on the market as more research is completed. But as of now, be aware that canned tomatoes, soups and pastas are your highest sources of BPA due to their acid consuming the lining of the can. Canned green beans and coconut milk have also shown very high levels of BPA.

Although we successfully achieved a BPA free alternative for low-acid food such as beans, the canning industry has no suitable (in our opinion) can for high-acid food like tomatoes. After years of trying to realize one, Eden chose to move its canned tomatoes into amber glass jars to avoid BPA. In 2011 Eden moved a third of its tomatoes to amber glass, away from cans. The cans still have a baked on r-enamel. Due to the acids in tomato, the lining is epoxy based and does contain a minute amount of BPA. It is however in the ‘non-detectable’ range according to Eden’s independent laboratory extraction tests. The test was based on a detection level of 5 ppb (parts per billion). Our goal is zero.

A search for a lid for the glass jars again confirmed ‘there’s no such thing as the perfect food package.’ Regardless, we found the best there is. The inside of the twist caps has two coats of sealer between the food and the metal of the cap. The first applied coating has some BPA in it. The second protective sealant over the metal does not contain any, and isolates the first coating from contact with the jar’s contents.

According to the Environmental Working Group, the amount of BPA in receipts can be 1,000 times that found in cans or bottles. “Retail workers carry an average of 30 percent more BPA in their bodies than other adults. The Japan Paper Association began to halt the use of BPA in 1998, completing the phase-out by 2003.” www.ewg.org/bpa-in-store-receipts

Although the rest of us can most likely count cans as our largest source, studies show that returning to fresh, uncanned foods reduces (not eliminates) BPA levels considerably in a rather short time.

Bisphenol S effects have yet to be studied as extensively as BPA, but due to it being a bisphenol cousin it has many of the same negative toxicological effects as BPA.

A June, 2012 study shows that BPS (not as well tested as BPA, but potentially as harmful) has been replacing BPA in paper products.

A 2013 University of Texas study shows that BPS has similar damaging hormonal traits as those of BPA — the list includes the thermal paper sonograms are printed on!

Be Heard On BPA

How about an e-mail to those companies you purchase canned food from? You are welcome to copy and paste this example if you would like.

Although it is true that the scientific studies regarding BPA exposure are conflicting and confusing, why not be safe rather than sorry and line your cans without the addition of the hormone distruptor BPA.

Eden Foods has been doing that for more than a decade and they estimate an initial additional cost of 2.2 cents per can (until a safer, cheaper, more natural solution comes to light).

As a customer, I promise to pay the additional 2 cents for your product if you go BPA-free. But if you do not, my only recourse is to discontinue use of your product.