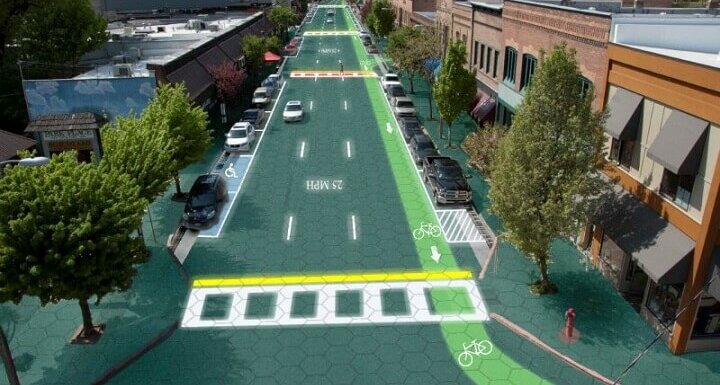 The Solar Roadways project is working to pave roads with solar panels that you can drive on. Their long range goal is to cover all concrete and asphalt surfaces that are exposed to the sun with Solar Road Panels. They plan to start off small: driveways, bike paths, patios, sidewalks, parking lots, playgrounds, etc. This is where they hope to learn lessons and perfect the system. Once the lessons have been learned and the bugs have all been resolved, they plan to move out onto public roads.

Solar Roadways’ prototype is complete and they are ready for production. They are looking to raise a bit more money to help them set up for U.S. production. 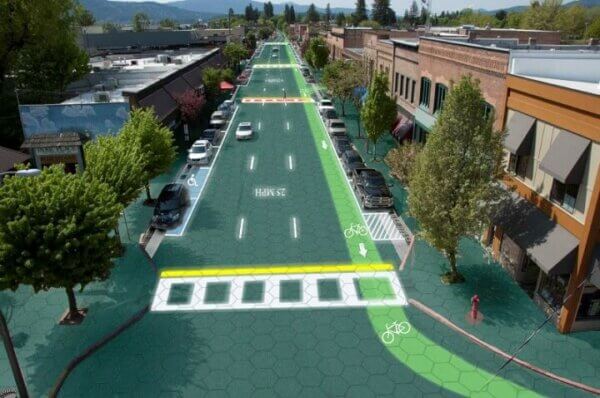 The inventor explains why he is crowdsourcing funds: “We have always been concerned about protecting our vision to implement this in the way that we think will have the most benefit: creating American jobs. We want to use as many recycled materials as we can and keep our manufacturing process as green as possible. If we can raise enough funds here, we won’t have to take on an investor and we won’t have to worry about losing our focus. If you like our vision and want to help, we’d be honored to have you in our corner.” www.indiegogo.com

See the prototype in the above video.

The Solar Roadways project is ready to pave roads with solar panels. Their long range goal is to cover all concrete and asphalt surfaces that are exposed to the sun with Solar Road Panels. They plan to start off small: driveways, bike paths, patios, sidewalks, parking lots, playgrounds, etc. This is where they hope to learn lessons and perfect the system. Once the lessons have been learned and the bugs have all been resolved, they plan to move out onto public roads.

Solar Roadways is a modular paving system of solar panels that can withstand the heaviest of trucks (250,000 pounds). They pay for themselves primarily through the generation of electricity, which can power homes and businesses connected via driveways and parking lots. A nationwide system could produce more clean renewable energy than this country uses as a whole (solarroadways.com/numbers.shtml). They have many other features as well, including: heating elements to stay snow/ice free, LEDs to make road lines and signage, and attached Cable Corridor to store and treat stormwater and provide a “home” for power and data cables. EVs will be able to charge with energy from the sun (instead of fossil fuels) from parking lots and driveways and after a roadway system is in place, mutual induction technology will allow for charging while driving.

The man behind the mission is Scott Brusaw of Sagle, Idaho. For more information visit www.solarroadways.com. Read the FAQs to find out how the solar panels will have as much traction as asphalt and how they will be self-cleaning, smart (can warn of animals on roadway ahead), illuminated and will melt snow…

The company received a $100,000 small-business contract to build the first prototype from the Federal Highway Administration. After successful completion of the Phase I SBIR contract, they were awarded a follow-up 2-year Phase II $750,000 SBIR contract by the Federal Highway Administration beginning in 2011. With this award, a prototype 12-foot by 36-foot solar parking lot is being built and will be tested under all weather and sunlight conditions. Mr. Brusaw’s design was voted first place for the $50,000 community award from the General Electric Ecomagination Challenge. To donate: www.indiegogo.com

Solar Roadways was named one of the top 100 innovations of 2014 by Popular Mechanics magazine, Scott was invited to the White House’s first Maker Faire, and his project was even mentioned in President Obama’s State of the Union address. In 2016, the Missouri Department of Transportation announced a pilot project to install Solar Roadways near the Route 66 Visitor Center. Fitting to have this possible transportation revolution on the road that helped launch the automobile revolution. 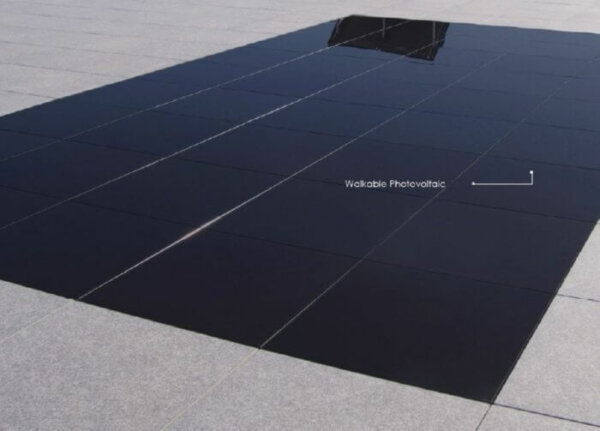 Spanish companies Onyx Solar and Butech have collaborated on developing a solar walkway which is now available for purchase.

The Onyx/Butech sidewalk is made of super-strong solar PV glass integrated over elevated ceramic and is walkable. You can even place furniture on it, but move it aside in the bright of day, so that the panels soak up the sun. The developers described their greatest challenge as heat dispersion, so that those who like to go barefoot will not burn their feet. The company says they have mastered that issue. As well, the companies have greatly reduced the intial CO2 manufacturing footprint. Kudos. 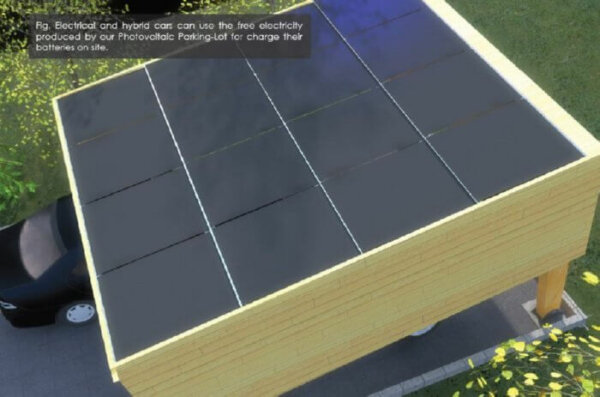