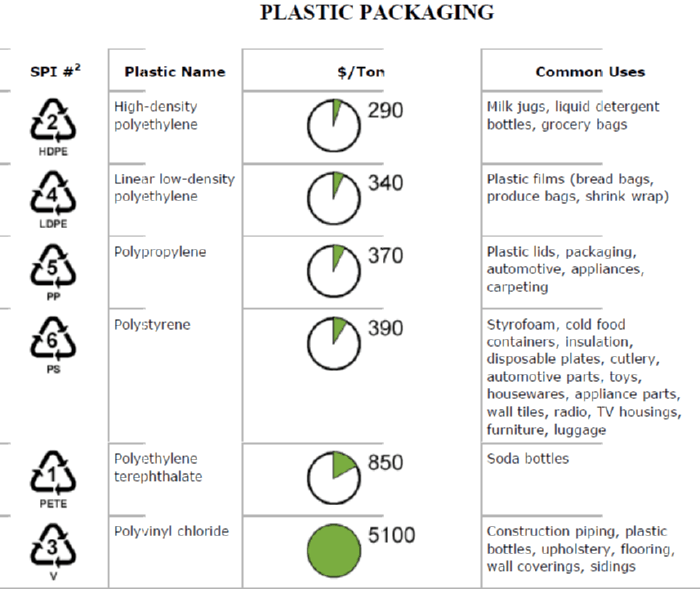 The environmental impact cost of manufacturing each plastic is measured in $/ton. HDPE, LDPE, PP, and PS have roughly the same environmental impact rating. PETE is about twice as high as these four. PVC is nearly six times higher than PETE primarily because of carcinogenic emissions. Only 1.8% of packaging plastic is recycled.
Source: ashlandfood.coop

Anyone who has ever struggled with opening a new CD, or cut themselves on the sharp plastic of those pesky clamshell containers, has felt the annoyance caused by packaging. Our irritation is sparked as we wrestle those darned twisty-ties, or break a nail trying to remove the stubborn wrapping on the cap of our favorite condiment. Some of us may wonder if all that plastic obstruction is necessary, or what happens to the remains of the offending wrapper. When you trash the plastic wrap and Styrofoam and Ziploc bags, where do they go? For that matter, what happens to all the other plastic disposables – from cutlery to water bottles – that have arisen to accommodate the throwaway, consumer lifestyle?

In an ecological sense, they go nowhere. Although transported from place to place, plastic packaging and other non-biodegradable disposables are the most persistent and infrequently recycled forms of waste. Every piece of plastic that has ever been produced is still in existence, with much of it collecting in our landfills and environment.  Roughly one third of municipal waste in the U.S. is comprised of discarded packaging. Most everything we buy these days is sold to us in some form of packaging, used to protect the enclosed product and advertise its value. These products may be customary and convenient, but they have serious consequences that affect our ecosystems and our health. An examination of the chemical components of commonly used plastics, as well as their manufacture and disposal, paints an unsustainable picture. 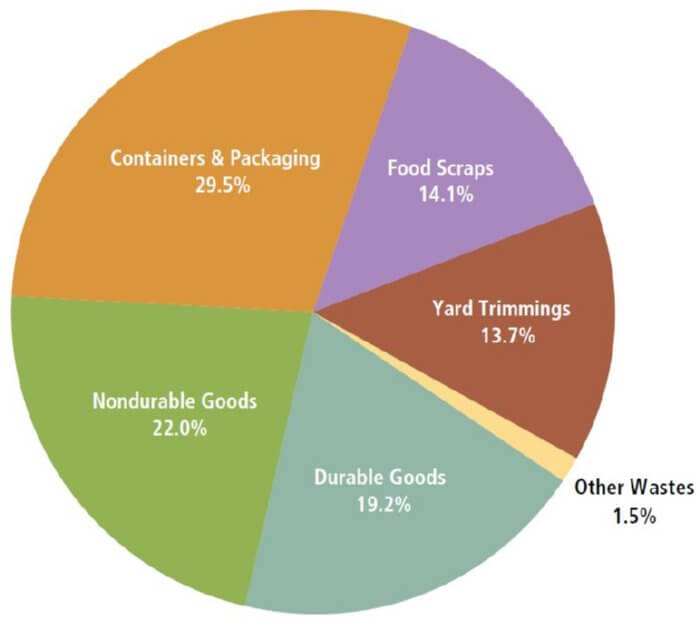 Polyvinyl chloride, or PVC, (#3) is an integral component of packaging plastics and a major environmental offender, generating greenhouse gases and toxic byproducts in its manufacture. Chlorine’s chemical structure makes these byproducts especially predisposed to buildup in the environment and in the bodies of animals and people. DEHP, a softening plasticizer that is added to PVC and labeled a potential carcinogen by the EPA, is prone to leaching.

This is worrisome, since PVC’s most common food-based applications are in cling wrap (used to package supermarket goods, or to preserve leftovers at home) and some food (squeeze bottles) and cooking oil containers. As such, it is probably not a good idea to purchase, store, and/or microwave food in cling wrap or containers marked with the “3” symbol on the bottom, indicating that it is made with PVC. Although 7 billion pounds of PVC is thrown away each year in the U.S., due to the nasty additives in PVC, only one-quarter of 1 percent is recycled. 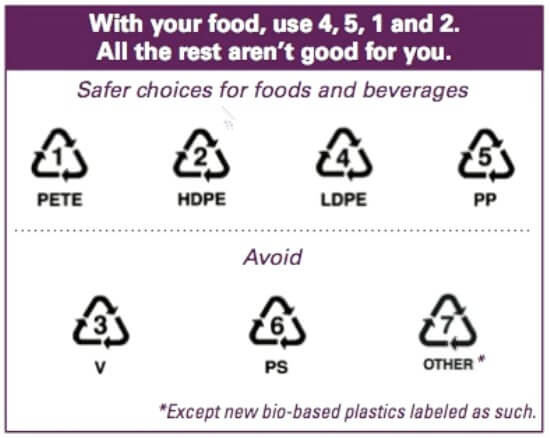 Polystyrene, (#6) better known by its trade name Styrofoam, is a material most of us are familiar with. We typically recognize it in fast food containers, disposable utensils and plates, insulation, and packing materials, but did you know that it can also be found in computer housings, hairdryers, kitchen appliances, and toys? Like PVC, both the manufacture and usage of polystyrene products negatively impacts both our health and the environment:

How To Help? Buy A Reusable Water Bottle

The best thing, of course, would be to stop using plastic water bottles completely. We recommend these eco-friendly, reusable water bottles.

The list of environmentally hazardous packaging and other disposables goes on. Did you know that more than 500 million disposable plastic straws are used in the U.S. per day? (Source) Or that China uses 45 billion pairs of disposable chopsticks per year, resulting in the annual decimation of 25 million trees? (Source) Bottled water produces 1.5 million tons of plastic waste per year. It is thousands of times more expensive than tap water, and in the U.S., far less regulated – despite the pristine imagery printed on the label, what you are drinking may be no cleaner than what you get from the faucet. The transformation of water into a pricy, wasteful, yet somehow desirable commodity may represent one of the biggest marketing scams in history. Instead of wasting money on the Dasani and Evian, protect the environment – and your wallet – by using a Thermos. The best options are stainless steel, lined aluminum, or glass. If you have concerns about the tap water quality in your community or don’t like the taste, installing a carbon filter is an easy and cost-effective remedy.

And if that isn’t enough to chew on, consider how much of your tax dollars went to unsustainably quenching Congress’ thirst… 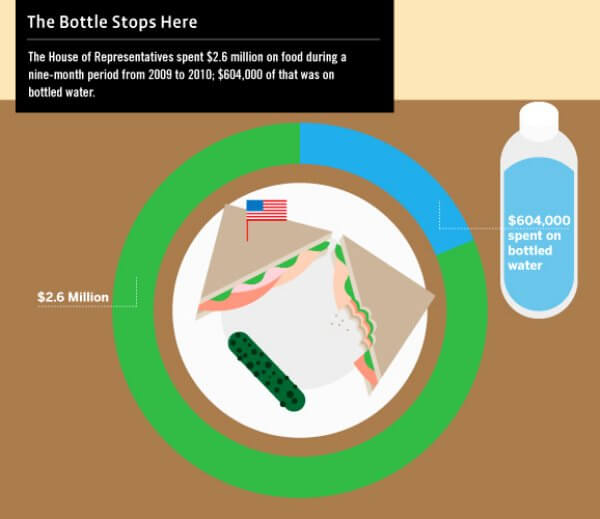 How can packaging waste and disposable waste be minimized? When you wander into a supermarket, chances are that the majority of what you see will be packaged, and not entirely without reason. Until all foods are locally sourced, transported products must be ensured a reasonable shelf life, lest they rot before consumption and go to waste. This does not mean that there isn’t a dramatic overuse of disposable packaging, or that all kinds are created equal. When shopping, you can try to select items that use minimal or reusable packaging, and bring your own reusable bags to carry them home with. Choosing recyclable cardboard and glass over plastic and polystyrene is less likely to harm the environment and your health. When you shop try to buy in bulk, thereby reducing individual packaging. European consumers should keep in mind that products marked with the Green Dot are manufactured by companies that help fund recycling and waste recovery efforts.

Plant-based eco-packaging is a growing industry, and companies like Earthcycle and Mycobond make both ethically-sourced and sustainable products. Mounting environmental concerns are eliciting some gradual progress on a systemic level, and pushes for legislative action can force companies to use and develop better packaging alternatives. California has already moved to ban the use of polystyrene containers in foodservice, and distribution will halt by 2014. A 2007 Nielsen Company survey spanning 48 countries demonstrated that 40% of respondents were “very concerned” about levels of packaging waste, and a report from the Grocery Manufacturers Association found that food and beverage companies have managed to slash 1.5 billion pounds of packaging since 2005. Sights are set on a further reduction of 2.5 billion pounds by 2020. (Source) Walmart has pledged to reduce its packaging weight 5% by 2013, and ASDA, its UK counterpart, has cut 27% of its packaging weight since 2005. U.S. Walmarts have also made strides in transitioning away from PVC packaging for its sheets and tablecloths. A recent New York Times article highlights corporate efforts to cut costs and eliminate excess: www.nytimes.com.

These companies need our continued urging, and putting our money where our mouths are, makes a difference. Wherever possible, relinquish disposable goods in favor of those that are reusable and sustainable. Avoid packaging that can hurt you and the environment and is destined to sit in landfills. We have the power to communicate that waste reduction is a priority by carefully choosing what we buy.

Waste prevention and recycling starts at home, and the CalRecycle website from CA.gov provides ideas and resources: www.calrecycle.ca.gov

Read about the pros and cons of biodegradable plastics like PLA and PHA: TIME Magazine, 2010, “The Promise and Pitfalls of Bioplastic.” www.time.com

List of U.S. cities and counties that have banned, or are considering banning, polystyrene foodware: riseaboveplastics.blogspot.com

Not just wasteful, but annoying: 2010 NY Times article on Packaging Rage, or what happens when you spend 20 minutes trying to open the new pair of headphones you bought. It has spurred Amazon.com to decrease the amount of packaging it uses to ship to online buyers, reducing both stress and waste. www.nytimes.com