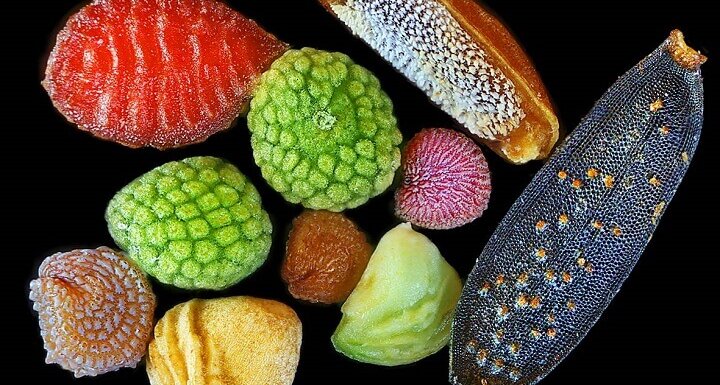 You are here: Home / Environment / Microscopic Images Of Seeds

The diversity and intricacy of shapes and sizes of seeds is extraordinary. Even more amazing is that within even the tiniest of seeds lies the complete genetic information required to birth and structure such organisms as the complex passion flower, or a 360 foot tall sequoia. Seeds are also amazing travelers, either with the help of the wind or by hitching rides with neighboring wildlife. If stored in ideal conditions, seeds can also spring to life, after hundreds of years of lying dormant.

More often than not, the smaller the seed, the more texture found on its surface. Image by Rob Kesseler, robkesseler.co.uk

Loasa Chilensis (a creeping flowering vine, native to Chile). Many wind-dispersed seeds have a honeycomb pattern, which are referred to as balloon seeds, this Chilean native has an extreme honeycomb. To create a scanning electron micrograph, a seed is coated with a microfine layer of gold or platinum and put into a vacuum chamber, where it is bombarded with electron particles. The electron beam measures the seed’s surfaces and translates these measurements into a digital image. Image by Rob Kesseler, robkesseler.co.uk.

A sundrew seed from South Africa. Rob colors the images in Photoshop based on the colors of the original plant. Image by Rob Kesseler, robkesseler.co.uk.

Delphinium pergrinum, Larkspar family. Texture helps the seed to both hug into its host surface and for mobility purposes. By Rob Kesseler: robkesseler.co.uk.

African Cabbage seed, a wildflower indigenous to Africa, but now considered a weed in many tropical locations around the world. Photo by Rob Kesseler. robkesseler.co.uk.

Seed from a thistle of the Centaurea genus. Photo by Rob Kesseler. robkesseler.co.uk.

A forget-me-not cousin, from the Trichodesma genus. Photo by Rob Kesseler. robkesseler.co.uk.

Crassula pellucida, a succulent, in the jade family. Image by Rob Kesseler, robkesseler.co.uk.

Lamourouxia viscosa (a Mexican wildflower). Scanning electron microscopes, scan specimens with a beam of electrons and produces a series of precisely detailed files, which are then compiled into a single image. Image by Rob Kesseler, robkesseler.co.uk.

Arabidopsis Thaliana (a European cress). The image shows a small, six-day-old seedling of Arabidopsis thaliana under a scanning electron microscope and captures the essence of seed germination, the tiny and delicate beginnings of a plant. Love the textures. Image by: Mark Talbot. maxisciences.com

Castor Bean Seeds are poisonous to people, animals, and insects. Each seed is unique in design. Image by Mark Birkle, flickr.com

The largest known seed in the world belongs to the Coco de Mer palm (Lodoicea maldivica). The seed is found within an even heavier/larger nut. The seed itself can weigh up to 40 pounds, the largest fruit/nut weighed over 80 pounds. hutpedia.blogspot.com

Dandelion seeds have an efficient means of locomotion.

The Best Photography Book About Seeds