You are here: Home / IG / Dent Corn Puts a Dent in Our Health

Field corn and sweet corn might have similar roots but are very different crops.

Sweet Corn: The Corn We Eat

Sweet corn is not even factored into commercial corn statistics. Sweet corn is grown on a bit more than 600,000 acres in the U.S., which is the size of not quite three quarters of Long Island, N.Y.. Four hundred thousand of those sweet corn acres are devoted to corn that will be either canned or frozen. A bit more than 260,000 acres is devoted to fresh sweet corn.(1) Sweet corn is America’s third most loved vegetable and each American consumes almost nine pounds of fresh corn per year; include in that figure canned and frozen sweet corn and the figure is 24 pounds of sweet corn per person. Potatoes are a far distant first at 134 pounds, second is lettuce at 30 pounds per year, tomatoes are a close fourth at 22 pounds per year.(2) 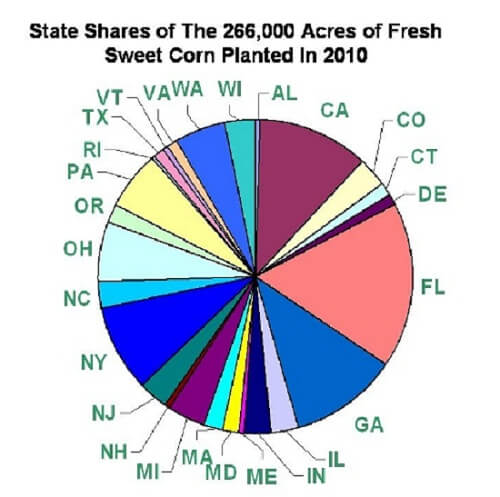 Where is Iowa and Nebraska??? All the corn in the cornfields you see out in the Midwest is being used to feed cars and animals (who would prefer to eat grass) and to make high fructose corn syrup. Chart: biofortified.org

Field corn is also known as yellow dent corn, as the kernels become indented with maturity. Although growing on fertile land the size of California, field corn is indigestible to humans without processing. But due to subsidies from the federal government which encourage more is better, industry has found a multitude of other uses for this water hungry, highly fertilized, shallow-rooted annual. The majority of field corn (40 percent) is used for ethanol, and 37 percent is used to rapidly fatten up grass-loving livestock. So, seventy six percent of the field corn grown in the United States is used for cars and grain-fed meat. 11 percent is used to make processed corn products, i.e. corn syrup, corn flour, and corn starch. 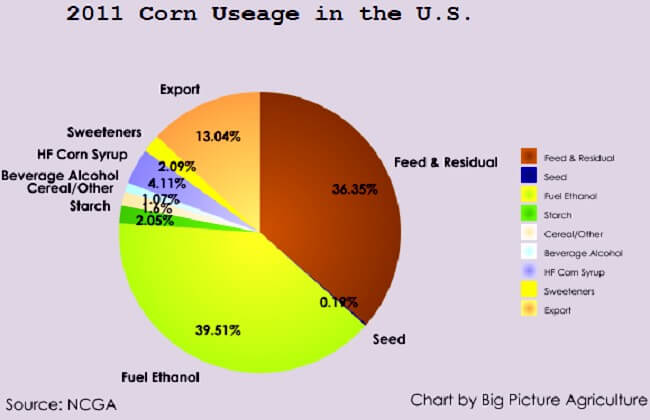 Nearly ninety two percent of the field corn planted in the U.S. is genetically modified, in contrast to sweet corn, of which about 10 percent was genetically modified in 2011. Although Syngenta’s Bt ‘Attribute’ seed has been on the market for over 10 years, it is not widely used, as it is only sold to commercial growers who sign a stewardship agreement and also plant a minimum of 20 acres. But in 2012 another company came into the sweet corn market, Monsanto. Monsanto introduced its first GM sweet corn seed called ‘Performance’ with three GM traits; Roundup Ready herbicide tolerant and two insect resistant traits (corn-borer and rootworm).(5) It was rumoured Monsanto was ready to produce enough seed to cover 250,000 acres with its GM sweet corn in 2012 but the company has not divulged how much it has sold or how much was planted.(6) The 2013 figures are also not available. Wal-Mart has agreed to sell Monsanto’s corn, but Whole Foods, Trader Joe’s and General Mills have pledged not to sell or use it. Be sure to ask your local farmer what corn he has planted.

Yellow dent or field corn is also made into cornmeal, corn flakes, hominy, grits, corn starch, corn sugar, corn syrup, corn oil, corn-oil meal, gluten feed and meal, whiskey and alcohol. You can be fairly certain you are consuming GMO when consuming any of the above, unless you seek out organic options.

A product never sold directly to the consumer, and one you will never have the option to purchase as organic, but which is contained in possibly 80 percent of processed foods, is high fructose corn syrup. The United States has the highest consumption of high-fructose corn syrup at 42 pounds per person, per year.(7) But the good news is consumption is going down. In 2011 each American consumed 131 calories worth of corn sweeteners a day, down 16 percent from 2007.(8) Total shipments of HFCS for 2011 came to more than 19 billion pounds.(9)

How High-Fructose Corn Syrup Got So Big

America’s corn syrup addiction (new study claims it’s addictive) started due to a confluence of government maneuvers. In the 1973 Farm Bill, the U.S. Department of Agriculture began a new system of direct payments (subsidies) to corn farmers, helping encourage ever-bigger outputs (and huge corn surpluses). In 1977, imported sugar tariffs and production quotas of domestic sugar were imposed which significantly increased the cost of table sugar in the U.S. As sugar prices rose, manufacturers looked for cheaper options. Since government subsidies were keeping corn prices low, the solution was close at hand. HFCS was rapidly introduced into many processed foods and soft drinks from the mid-1970s on.

How High-Fructose Corn Syrup Is Made

HFCS is a highly processed industrialized ingredient. HFCS ends up with a different chemical structure than simple corn syrup. The process starts with field corn which is put in a wet mill where the kernels are separated from the gooey starch within. Enzymes (a-amylase & glucoamylase) are added to first break down the corn starch into individual glucose molecules, which results in corn syrup, essentially 100% glucose. For HFCS the glucose is then transformed into fructose by passing the glucose through a column that is loaded with Glucose Isomerase (a genetically modified catalyst). This converts the glucose to a mixture of about 42% fructose and 50–52% glucose. Numerous filtration, ion-exchange, heating and evaporation steps and liquid chromatography are also part of the overall process.(11)

The most common forms of HFCS contain either 42 percent or 55 percent fructose. HFCS 42 is mainly used in processed foods, cereals, baked goods, lunch meats and some beverages. HFCS 55 is used primarily in soft drinks. Many believe HFCS is not processed by our bodies the same way simple sugars are and site that obesity and diabetes rates have soared since HFCS entered the food supply. It is also notable that countries with the highest consumption rates of HFCS also have the highest rates of obesity and diabetes.(7)

U.S. corn subsidies totaled $113.9 billion dollars between 1995 and 2019. And last year due to drought, federally supported corn crop insurance could pay out a record $20 billion or more, even though 2012 provided a higher quality overall crop. 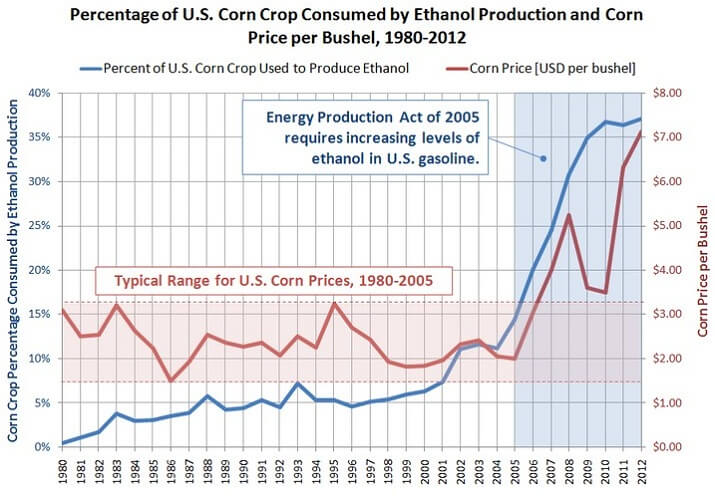 Maybe ethanol is not the worst thing in the world, but it hurts to know big oil companies are purchasing and reselling a product that the U.S. government subsidizes. (And those ethanol subsidies are on top of the $8 billion annual subsidies for oil.) It also hurts to know that all this monoculture corn farming is creating a huge nitrogen influx into our waterways that kills fish. And it hurts to know our livestock is being force fed an unnatural diet of corn that makes them ill and dependant on antibiotics. Yet our farmers are not to blame, our system is.

The U.S. subsidizes corn, soy, wheat, cotton and rice. That has encouraged farms to grow monocultures on land that stretches further than the eye can see. Small farms were bought up and now Big Ag receives a large percentage of those subsidies. Farms that grow fruit, vegetables and beans do not recieve subsidies.

Even though, we seem to have a crisis on our hands, the U.S. government, corn lobbyists, trade associations and the Big Six (Monsanto, BASF, Bayer, Dow, DuPont and Syngenta) keep oiling the machine that was started in the mid-70s…a machine that needs to be reassessed. Instead of promoting clean energy, sustainable farming methods, healthy crops, and healthy (antibiotic-free) livestock, we keep feeding an unnatural system that becomes more dangerous with each passing year.

Our federal dollars are being used to keep the American populace unhealthy and fat. We are subsidizing pollution, environmental degradation and obesity, all of which have long term health costs that will make these federal corn subsidies look like pocket change.

According to Dee Dee Flynn, Executive Director of the Popcorn Board, popcorn is a specialty corn that is not genetically modified, non-organic is still grown with pesticides, etc., but not gmo seed. Americans each consume 52 quarts of popped popcorn per year.

Corn with color (deep yellow, red, blue) is far superior nutritionally than new hybrid, white super-sweets which have much more sugar, than nutrients. See: Breeding the Nutrition Out of Our Food By Jo Robinson.