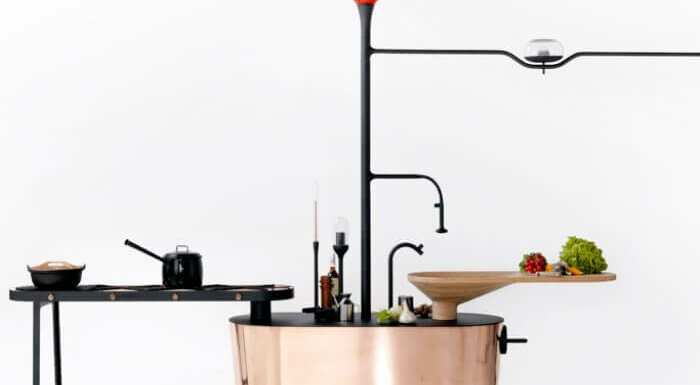 You are here: Home / Environment / Kitchen Of The Future

“Energy-saving light bulbs will only take us so far. We need to push ourselves to rethink domestic appliances entirely, to rethink how homes consume energy, and how entire communities can pool resources” says Clive van Heerden, Senior Director of Design-led Innovation at Philips Design. Philips believes the solution is likely to come from biological processes, which are less energy-consuming and non-polluting. We need to go back to nature in order to move forward. The Microbial Home is a proposal for an integrated cyclical ecosystem where each function’s output is another’s input. In this project the home has been viewed as a biological machine to filter, process and recycle what we conventionally think of as waste – sewage, effluent, garbage and waste water.

Technological development has enabled us to mimic nature’s processes. Now, all that is lacking is a collective change in consciousness to take us into a Biological Age where by-products are no longer waste but fuel for other systems.

The paternoster domestic plastic waste up-cycler uses mycelium to break down plastic packaging waste. The waste up-cycler concept utilizes the properties of fungi that have powerful enzymes and decomposing power. A mycelium attached to plastic, has the ability to decompose and metabolize plastic. Provided the inks on the plastic did not contain toxic heavy metals, this mycelium could in theory generate edible mushrooms.

In this concept the plastics are ground into small chips and mixed with a fungal starter culture in a glass canister. A hand-cranked conveyor moves the canisters along a circuit within a dark cavity. Each week plastic grounds are mixed with mycelium. It takes several weeks to break down the plastic or other waste material. At late stages in the cycle the contents are exposed to daylight (via an aperture) and air allowing the mycelium to sprout mushroom fruit, ready to eat. The decomposing waste can be molded into shapes.

The larder consists of an evaporative cooler and vegetable storage system built into a dining table. The home of the future will need to accommodate a much greater proportion of local and home-grown food.

The larder revives the ritual of preparing food together around the dining table. With a twin-walled terra cotta evaporative cooler at its center, the compartments and chambers vary in wall thicknesses and volumes and are designed to keep different types of food at different optimal temperatures.

Urban bee-hive. The glass shell filters light to let through the orange wavelength which bees use for sight. The design prevents worry that the hive would freeze during subzero nights.

The urban beehive consists of an outside flower pot with a bee entryway above it. The inside glass container has honeycomb frames for the bees to build their wax cells on. A pull on the bottom of the hive is a smoke actuator that lets you calm the bees down before you collect some honey.

An integrated cyclical ecosystem where each function’s output is another’s input. We view the home as a biological machine to filter, process and recycle what we conventionally think of as waste – sewage, effluent, garbage, waste water. Research suggests that we should move closer to nature and challenges the wisdom of annihilating the bacteria that surround us.

In the home of the future we will have to rethink our own waste and convert it into a usable asset.

A waste separating squatting toilet filters urine while channelling excreta to a methane digester in the Microbial Home system. The filter array, comprised of charcoal, sand and ceramic filters, supports a range of plants to clean the urine. The system is designed to show the energy value in human waste and raise awareness about wasting water. It draws attention to the necessary systemic shift from utility dependent sanitation systems to regenerative localized solutions that see waste as a necessary part of a domestic eco-system.

The bio-light concept explores the use of bioluminescent bacteria, which are fed with methane and composted material (drawn from the methane digester in the Microbial Home system). Alternatively the cellular light array can be filled with fluorescent proteins that emit different frequencies of light. Each cell is connected via silicon tubes to the food source, (which is drawn from a reservoir at the base) creating a closed loop system for the living material.

Luminescence is the phenomenon where light is produced at low temperatures, as opposed to incandescence, where light is generated as a result of high heat. Bioluminescent organisms produce an enzyme, luciferase, which interacts with a particular type of light-emitting molecule called a luciferin.

All info and images: www.design.philips.com