Flame retardants, so light, so small, so much…they are everywhere.

In the United States, fires claim over 3,500 lives a year and injure more than 18,000. To help prevent these life-threatening blazes from ever starting, flame retardants are used in the manufacture of a variety of consumer products. Recent research is showing that the use of these chemicals in the manufacture of electronics, plastics, clothing, and furnishings may be problematic in their own right.

Today, more than 175 chemicals are used as flame retardants.
The four major groups with examples are:

Flame retardants work by slowing the ignition rate of items in which they are included. But instead of confinement to these products, flame retardant chemicals can migrate out, accumulating in the environment and the human body. The early flame retardant, PCB was banned in 1977 when it was finally deemed toxic.1 Although no longer produced in the United States, PCBs and its component parts (PCBs = a mix of up to 209 individual chlorinated compounds/congeners) are still found in the environment. Since the ban, chemical companies have shifted to using brominated flame retardants such as Polybrominated diphenylethers (PBDEs) and decabromodiphenyl ether (decaBDE) which unfortunately are structurally similar to toxic PCBs, dioxins, and furans.* All are persistent organic pollutants that resist breakdown in the environment and in the bodies of animals.

PBBs (polybrominated biphenyls) were banned in the U.S. after the Velsicol Chemical Corporation (then Michigan Chemical Company) delivered an undetermined quantity* of poorly marked bags of PBB to the Michigan Farm Bureau Services in 1973.^The PBB was distributed to feed companies that mistakenly added the PBBs (thinking it magnesium oxide, a nutritional supplement) to its feed for meat and dairy cattle, an accident that subsequently resulted in nine million residents consuming contaminated milk and meat for almost one full year before the mistake was identified.^ The serious toll on human health in Michigan is still being felt to this day.^ After PBBs were banned, Velsicol illegally dumped over 200,000 pounds of PBB in an unlined landfill. The site of Velsicol’s St. Louis, Michigan plant is now one of the U.S.’s costliest superfund sites. Velsicol Chemical Corporation today produces Hexachlorocyclopentadiene (HEX), a persistent organic pollutant, which is used to manufacture flame retardants for plastics, wire, and to make pesticides.

Are Flame Retardants Still A Danger?

The inclusion of PBBs and PBDEs in electric and electronic devices was recently prohibited in EU countries, but PBDEs are still legal product additives in most U.S. states (California, Hawaii, Massachusetts, Michigan, Maine, New York, and Washington have all enacted some legislation to either ban, regulate the use of, or investigate the effects of PBDE).^

Exposure to flame retardants is almost universal. They are present in birds, fish, mammals, sediments, air samples, sewage sludge, meat, vegetables, and human tissues across North America, Japan and Antarctica. 97% of Americans have detectable levels of PBDEs in their bodies, and the world’s highest are found in Californians. This is probably due to the state’s stringent product flammability standard, Technical Bulletin 117, which requires that furniture be able to withstand an open flame for at least 12 seconds.^ Using flame retardants in furnishings is the most cost-effective way to meet this standard, but with the consequence of bioaccumulation and persistence, we most likely have just begun to feel the lasting impact of PBDE. (As an example, the calculated half-life of PBBs is 10.8 years.)2 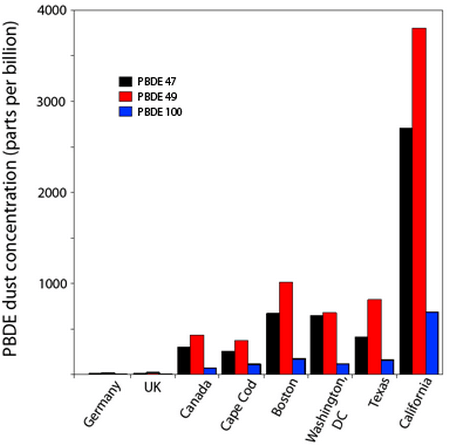 Californians have the highest levels of PBDEs in their bodies.

How Flame Retardant Chemicals Get Into Our Bodies

How are flame retardants like PBDE finding their way out of our belongings and into everything else – including us? Scientists aren’t definitively sure. But products made with flame retardants can break down over time and release them into the surrounding area, such as polyurethane foam found in mattresses, upholstery, car seats, and other cushionings.^ Besides just making you sneeze, household dust may be a common exposure route to flame retardants like PBDE, and the coat on your television set sports particularly high levels of it.^Scientists from Boston University’s School of Public Health theorize that flame retardants in the TV are vaporized by the heat it generates, and incorporate into settling dust that is inadvertently consumed and breathed in. PBDEs also rinse off laundry and end up in sewage that’s applied to farm fields as fertilizer. PBDEs are also released into the air during manufacturing and when products are landfilled, where it can be inhaled or settle on food products.^&^

Infants and small children may be at the greatest risk for bodily accumulation of flame retardants. Besides having greater contact with household dust, a study spearheaded by Duke University found that 80% of cushions in children’s furnishings, from cribs to car seats, contain a flame retardant called chlorinated Tris.^ Its chemical cousin, brominated Tris, was briefly banned as a children’s sleepwear retardant in 1977 after its mutagenic and carcinogenic properties were discovered.^ Chlorinated Tris is linked to similar adverse health effects, and the other compounds identified in baby products are lacking in safety data. Contaminated fetal environments may also be problematic, since PBDE in the blood of pregnant mothers might affect developing children by lowering IQ, birthweight, and attention span.^&^ Brominated flame retardants are also present at high levels in breast milk, particularly in the United States.^ Scientists check for PBDEs in breast milk because the chemicals stick to fat. PBDEs may also result in developmental toxicity of the brain, thyroid, and reproductive system. 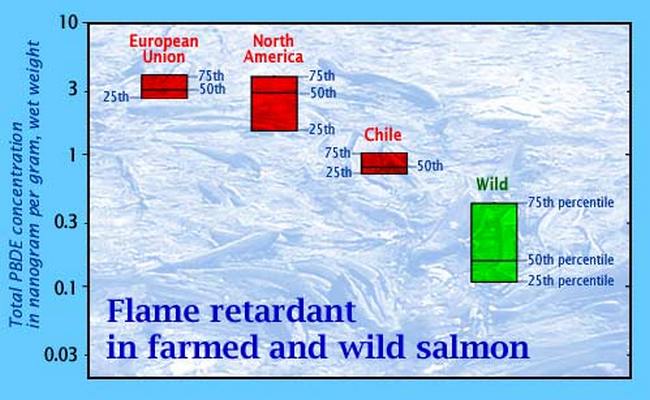 Total PBDE concentration – farmed salmon (in red) is most likely being further contaminated from the feed.

What Items Are Manufactured With Flame Retardants?

If you decide that the potential risks of brominated flame retardants like PBDE outweigh the benefits, the list below provides ways to help minimize exposure in American states where PBDE is still used -some of the tips are from the Environmental Working Group, www.ewg.org:

Pajamas are not treated with PBDEs, athough synthetic fabrics are often made with a chemical additive to make them fire resistant. Chemicals used in sleepwear labeled “fire resistant” will remain in the fabric for at least 50 washes. To avoid any chemicals in sleepwear and reduce the risk of igniting sleepwear, choose natural fibers that are inherently fire resistant and snug-fitting.

Possibly a solution would be to have mandatory fire prevention courses – and then we could leave the synthetic chemicals out of our personal items!