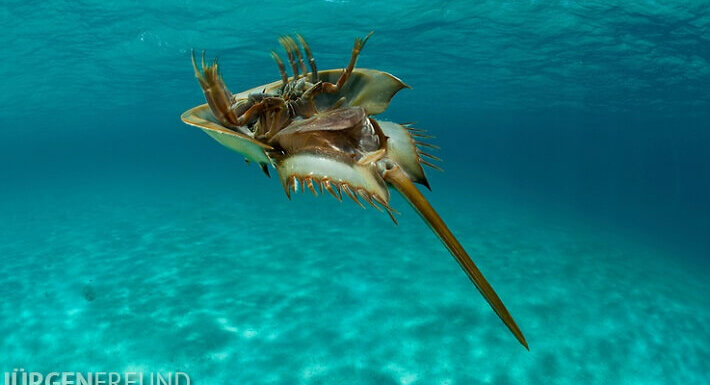 Horseshoe crabs are not crabs, they are in the arthropod family and related to spiders and scorpions.

They have been on the planet for 445 million years and they’ve changed very little during that time.

The oldest land animals date to about 415 million years ago. Those early land residents were scorpions, spiders and insects; the horseshoe crab’s closest living relatives.

Shorebirds eat many of the eggs before they have a chance to hatch.

Their eggs are a main source of food for millions of migratory birds.

After 4 to 30 days the larvae emerge.

Horseshoe crabs spend the first two years of their life close by to where they hatched. Then they will travel to deeper water.

They molt about 6 times during their first year.

They can not reproduce until they are 9 to 11 years old.

They have baby blue blood.

They have copper in their blood (hemocyanin), not iron (hemoglobin).

Their blood protects them from infection. For this reason, their blood is capable of detecting toxins in medical applications.

A chemical found in a horseshoe crab’s blood cells, can detect viruses, bacterial toxins or contaminates in any solution and then trap the contaminant in clots. Limulus amebocyte lysate, or LAL is used to test the purity of all precription drugs, vaccines, I.V. fluids, surgical implants, and other medical paraphernalia that goes under the skin. LAL can detect contaminants at levels as low as one part per trillion.

Harvesting horseshoe crab blood involves collecting them in the wild, straping them to racks, sticking needles in their hearts and then drainimg them of about a third of their blood. They are then placed back in the sea. Seventy to eighty five percent survive the ordeal.

Horseshoe crab blood can fetch $15,000 a quart. Only five companies in the U.S. are licensed by the FDA to produce and sell LAL.

A protein from horseshoe crab blood is under going tests as an antibiotic.

More than 610,000 horseshoe crabs were harvested for biomedical purposes in the U.S. in 2012. Horseshoe crabs do not live in captivity for more than two years, so they are caught in the wild.

Females are 20-30 percent larger than males.

Their brain’s are doughnut-shaped and encircle the mouth.

They can regrow lost limbs.

Their shells are composed of chitin.

Having shells of chitin (think beetle or lobster shells) rather than of calcium carbonate (shells, eggshells) makes them able to tolerate low-oxygen water and ocean acidification.

Horseshoe crabs have 9 eyes and can see UV light. They are the oldest living animal with compound eyes.

They can swim upside down.

They only populate the eastern seaboard of North America and only the eastern coasts of Asia (but also the west coast of Thailand and Myanmar).

They live in the mud and sand in shallow water and on continental shelves but not where water exceeds a hundred feet deep.

They love muddy water and eat worms and mollusks on the seafloor.

Seagulls will eat them if overturned on a beach. Loggerhead sea turtles eat adolescent and adult horseshoe crabs.

The largest population in the world show up in Delaware Bay during mating season.

Mating season is only once a year during the full and/or new moons in May or June at high tide.

They do not venture toward shore when the surf is rough.

The male fertilizes the eggs after the female releases them in the sand close to the high tide water line. The male holds onto the back of the females shell while she lays the eggs. If there are less females than males, extra males will stay near a mating couple to help fertilize the eggs.

The female releases her eggs in clusters of about 4000. She will release about 4 or 5 clusters per high tide. Therefore she must come up to the high tide waterline for 4 or 5 high tides.

A male might hold onto a female for days during mating season.

Many millions of horseshoe crabs have been used by humans as fishing bait and for fertilizer. In Asia the are also eaten by humans.

All three Asiatic species are in severe decline.

Never pick up a horseshoe crab by its telson (tail).

Each spring during breeding season about 10% of the horseshoe crab population dies when rough surf flips them onto their backs. The ‘Just Flip ’em’ campaign asks that you gently turn them onto their stomachs. Have no fear, they are gentle creatures. They do not bite. But we do.

New Jersey, South Carolina and Fire Island, NY. have moratoriums on harvesting. In Delaware harvesting is restricted to males only. – See more at: https://web.archive.org/web/20150915003723/https://www.inspirationgreen.com/horseshoe-crab-facts.html#sthash.NInZffKV.dpuf