You are here: Home / IG / Food Choices Affect the Climate

From the “Meat Eater’s Guide to Climate Change and Health”

The Environmental Working Group‘s new report takes into account the full “cradle-to-grave” carbon footprint of each food item based on the greenhouse gas (GHG) emissions generated before and after the food leaves the farm. This includes but is not limited to: use of water, pesticides and fertilizers, animal feed through the grazing, animal raising, processing, transportation, cooking, and disposal of unused food.

The surprise for me is cheese!
Lamb, beef, cheese and pork generate the most greenhouse gases. They have the worst environmental impacts, because producing them requires the most resources – mainly chemical fertilizers, feed, fuel, pesticides and water – and pound for pound, they generate more polluting manure.

But the good news is that meat, eggs and dairy products (especially low-fat) that are certified organic, humane and/or grass-fed are generally much less environmentally damaging than conventional meat and dairy. Greenhouse gas emissions vary depending on the quantity of chemical fertilizers, fuel and other farming practices. Yet, although organic is better, eating ‘less’ meat and dense cheese is the best way to reduce emissions.

To ease the guilt of those of us who love cheese, the EWG notes that less dense cheeses produce fewer greenhouse gases since they take less milk to produce. Cottage cheese, ricotta, cream cheese, part-skim or fresh mozzarella, gouda, feta and muenster are all more earth-friendly choices, especially if organic. 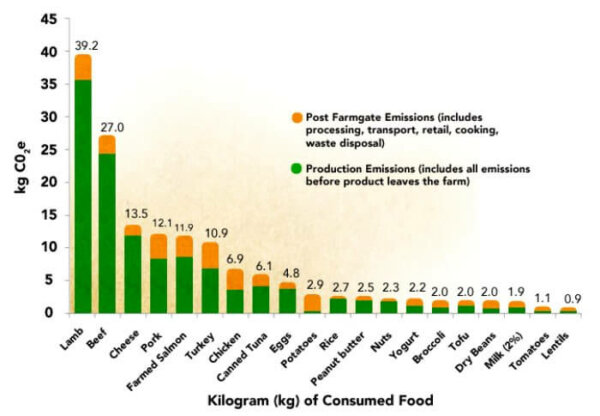 Lamb, beef and cheese have the highest emissions because they come from ruminant animals that constantly generate methane through their digestive process. Plus, ruminants also require significantly more energy-intensive feed and generate more manure than poultry.

Summary: giving up the worst offenders is good for the climate, the environment, your health and the well being of animals (as less animals will be raised in factory farms).

Farmed salmon has a high waste rate (44 percent is thrown away by retailers and consumers). And farmed salmon eat prepared fish meal which is energy-intensive to produce.

‘The RDA for men ages 19-70 is 56 grams per day of protein, and the most recent National Health and Nutrition Examination Survey showed that men in this age group consumed almost twice this much on average: 88.3-109.2 grams per day (Fulgoni 2008). By contrast, only 1 percent of children and 4 percent of adults ate their recommended daily intake of fruits and vegetables (Kimmons 2009). 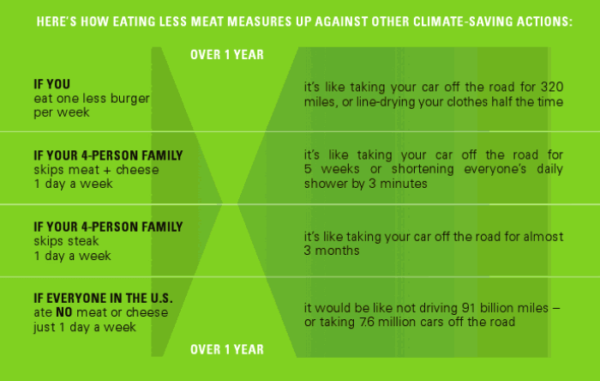