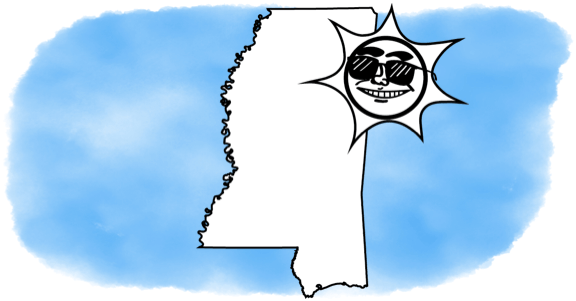 Going solar? Good call. It’s the right choice for your pocketbook and for the climate. If everyone in Mississippi used solar power, it would take 53 billion pounds of carbon out of the atmosphere every year—according to the EPA’s greenhouse gas calculator, that’s the equivalent of planting a forest that would cover nearly two-thirds of the state.

Solar power isn’t yet a big part of the energy mix in Mississippi. Nationally, the state ranks #47 in solar energy use.

The biggest advantage of solar energy? The cost—$0. For the average Mississippi household, generating all their own electricity with solar would save $1,695/year. Also, you’re doing a favor for the next generation. Instead of relying on natural gas plants, supplied by fracking and offshore drilling, which produce most of Mississippi’s electricity, you’ll be producing your own clean, renewable energy. In Mississippi, residential customers like you account for 18.8% of the state’s total energy consumption.

The disadvantages: The cost of installation. The average solar installation costs around $20,000. And Mississippi, unlike most states, doesn’t offer any tax breaks for folks who go solar. Federal incentives like the U.S. Residential Renewable Energy Tax Credit can bring the overall cost down.

The average Mississippi family uses 41,600 watts of energy on an average day. And, on average, they’ll get 4.75 hours of sweet Mississippi sun each day. So, to get enough energy to keep the power running all night, they’ll need their solar power array to generate 8,758 watts of energy per hour while the sun’s out.

To figure out exactly what you’d need based on where you live in Mississippi—and how much money you’d save—use this solar savings calculator:

Mississippi lags far behind most states in solar capacity, and is not making a serious effort to increase it.

Mississippi has few pro-renewable policies. Few subsidies are available for consumers or solar installers. However, Mississippi has enacted the Mississippi Clean Energy Initiative, a policy designed to attract the renewable energy industry state.

A naval facility in Gulfport broke ground on a new solar project.

Before the end of 2017, Northeast Mississippi Electric Power Association and SR New Albany LLC will begin construction of a 30-acre solar project located in New Albany.

In May 2017, Silicon Ranch, and others, began a solar project with the U.S. Navy at the Naval Air Station Meridian in Mississippi. The solar facility will produce 6 MW of solar energy.

The Sierra Club of Mississippi works to reduce fossil fuel use and promote solar.