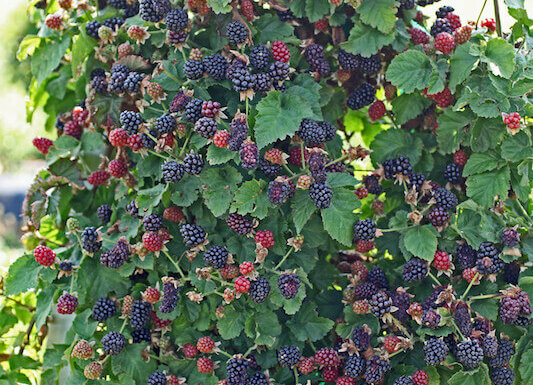 Blackberries are easy to grow. A diverse array of blackberry varieties are native to almost all of North America. They are especially abundant in areas with warm summer days, cool nights, and plenty of moisture.

An aggregate fruit composed of many tiny fruits known as drupes, blackberries are similar in taste and growth habit to raspberries. You can even find wild blackberries growing all over the place.

The flavor of blackberries is dark and rich with a unique combination of tart and sweet for a delicious summer treat. Blackberries are perfect as a topping for ice cream, added to desserts or smoothies, or preserved as jam or jelly to enjoy throughout the year.

For each cup of crushed blackberries gathered from the home garden, you will end up with a half-pint of jam, jelly or syrup.

What Is The Difference Between Raspberries & Blackberries?

Aside from taste, color, and size, the main difference between raspberries and blackberries is whether the fruit retains its white core.

Although mature blackberries can endure tough conditions, young plants can be quite sensitive. It’s essential to plant them during the right season and give them much TLC during their early growth stages.

When should you plant blackberries?

The best time to plant blackberries is late fall through early spring. Blackberries are very resilient plants when it comes to cold weather, they will do well in temperatures between 50 and 90 degrees Fahrenheit.

It’s important to note that if you’re planting blackberries from seed, they will not produce significant fruit the first year. They have a dormant period during late spring and winter, then start producing large quantities of mature fruit in their second full year of growth.

How to direct sow blackberries

Blackberries can be planted outdoors using young bushes typically bought at a nursery, or from seed for those with more patience. If you’re planting new plants from the nursery, dig holes twice as wide and deep as the blackberry root mass, then plant the bush.

If you choose to start with seeds, dig a hole at least 5 inches deep. Drop your seed into it and fill with soil and water well. If you’re planting multiple blackberry bushes, allow at least 12 inches of space between each one.

Can I start blackberry seeds indoors?

If you prefer to start your blackberry bush indoors then transplant outside, you must pick a variety that will not grow too large. An “erect dwarf” is a good choice for indoor growing.

Begin by filling the soil into a pot that is at least 12 inches deep. Place your blackberry seed into the center of the soil, and cover. Allow for well-draining soil, and don’t let it get too dry in-between watering periods.

Many blackberry varieties stop growing during the late fall and enter a dormant period. By winter or early spring, they will be completely dormant. This is the best time to transplant them outside.

What soil is best for blackberries?

Blackberry bushes do best in nutrient-rich, loamy, well-drained soil in a full sun location. Soil with a pH of 6.5-6.8 is ideal.

Blackberries should not be cultivated in soil that has previously grown tomatoes, potatoes, eggplant, peppers, strawberries, or any other type of berry bush or bramble. It’s recommended that you rotate blackberries every 4 to 5 years.

Mulch heavily around the base of each blackberry bush to help retain soil moisture, control weeds, and increase fruit yield. Use straw, pine bark, grass clippings, or untreated sawdust or wood chips.

Because a blackberry patch, once established, will produce for more than 30 years, it is important to make sure that the soil in the space allocated for blackberries provides the necessary growing requirements.

When it comes to daily care, make sure your blackberry bushes are getting at least 8 hours of sunlight a day. In addition, give them 1 to 2 inches of water per week.

Should you fertilize blackberries?

Wait about 3 to 4 weeks after planting to begin fertilizing. After growth starts, use a balanced fertilizer such as a 10-10-10. Continue to fertilize regularly to keep the soil rich with nutrients.

When mixed with topsoil, organic matter such as compost or manure works wonders with water. Allowing good drainage or a drip irrigation system through compacted heavy soil will help to retain moisture in sandy soil.

Do blackberries need trellises or support?

Blackberries are wide-spreading and want to climb. After the second year of growth, they will need some kind of support structure.

We recommend reinforcing it with a stake or trellis. You can also install a support structure before or during planting to encourage the vines to climb during early growth.

Blackberries are susceptible to a number of fungal diseases such as Cercospora, Pseudocercospora, and Septoria. As soon as you see signs of these, apply fungicides as soon as possible.

Common pests for blackberries include the Spotted Winged Drosophila, Japanese Beetle, and the Blackberry Psyllid. Most of these bugs are visible and can be hand-plucked off. Otherwise, spray an organic pesticide to protect your plants.

What companion plants are compatible with blackberries?

Companion planting, or the gardening practice of locating plants close to each other that benefit each other, helps boost fruit yield when cultivating blackberries.

They attract bees for pollination and help repel foliage and fruit predators, keeping beetles and mice away from your blackberry crop. Planting beans or peas near the base of blackberry bushes helps impart nitrogen into the soil of the blackberry patch.

When are blackberries ready to be harvested?

Blackberries bloom in profusion beginning in late June. The fruit is ripe by mid-July. As mentioned earlier, many varieties will not be ready the first year of growth. However, the second year and beyond will yield a significant amount of fruit for years to come.

You will know your blackberries are ready to be harvested when the fruit looks plump with a very dark black color. After fruit starts setting, it usually takes about a day or two to turn this color.

How to harvest blackberries

Once blackberries are ripe, they must be harvested regularly – pluck them every few days. There’s no need to use scissors or gardening tools, mature blackberries will give easily with a slight tug.

As you pick blackberries, prune back the branches. This allows for new growth in its place. Once picked, keep the fruit in a cool location such as a refrigerator.

Divided into three main groups, blackberries are distinguished by a difference in the growth habit of their canes: trailing, semi-erect, and erect. Hybrids also exist.

Blackberries have a perennial root system with biennial canes. The new shoots, known as primocanes, develop during the first growing season. The primocanes are retained through the winter. During the following year of growing, primocanes are referred to as floricanes. As the floricanes mature, they bloom, bear fruit, and then die off after flowering.

These types of blackberries have stiff arching canes that are somewhat self-supporting. However, they are much easier to handle when trellised and pruned. Summer prune or tip primocanes to encourage branching and increase fruit production on the second-year floricanes. Plants can become invasive to an area, as they can produce new primocanes (suckers) from the roots.

Erect blackberries which produce fruit with relatively large seeds. Flavor and aroma are not considered as intense as in the training blackberry cultivars. They are semi-hardy in climates with rapid springtime temperature shifts, like Colorado.

Primocane-fruiting cultivars of erect blackberries produce fruit on the new canes. This makes management easier as the canes can be cut to the ground each winter.

Semi-erect blackberry plants are thornless and produce vigorous, thick, erect canes from the crown. No primocanes are produced from the roots. Prune primocanes in the summer to encourage branching and increase fruit production on floricanes.

A trellis is required to support the canes. Semi-erect blackberries generally produce a higher yield than trailing or erect types. Fruit quality is similar to that of the erect blackberries.

These are generally natural crosses between blackberries and raspberries. Because the receptacle (white core) comes off with the fruit, they are generally considered a type of blackberry. Popular cultivars include Boysen (Boysenberry), Logan (Loganberry), and Tay (Tayberry).

For most homesteaders, orderly rows of blackberry bushes present the easiest harvesting opportunities. However, you can cultivate blackberries mixed with other fruit-bearing shrubs.

The goal of both rural and urban homesteaders is to develop self-sufficiency by growing our own fruits and vegetables.

If properly planted and managed, a blackberry patch can produce an abundance of fresh and flavorful berries; more than enough for canning, preserving, sharing with family and friends, and selling at the farmer’s market.

Just three or four blackberry plants will more than supply the needs of a family of four. Commercial growers can anticipate a yield of 6,000 pounds per season from a well-managed one-acre blackberry bramble.

Growing Blackberries And Raspberries In Kentucky, University of Kentucky

Growing Blackberries For Profit, Gardens All

“A passionate writer for more than 30 years, Marlene Affeld writes of her love of nature and all things natural. Specializing in Eco-Travel, Science, Environmental Health, Conservation, The Beauty of Nature, Sustainability, Green Issues, and Wildlife, Affeld’s passion for the environment inspires her to write informative articles to assist others in living a green lifestyle.”