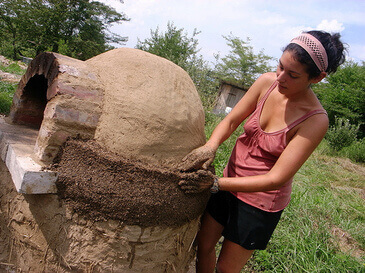 You are here: Home / Living / How To Build Your Own Cheap Outdoor Pizza Oven

Last summer, I got hooked on the idea of baking pizza and bread outdoors in a wood-fired oven. Baking outside, in a super hot oven with a brick hearth, (the way bread is really meant to be baked) was a hugely appealing thought.

It became very clear to me that I wanted to build a cob oven, which would be fairly easy and quick to build, and very cheap, too. You can build your own cob oven for as little as what you might spend on a pizza delivery on a Friday night!

Cob is an ancient earthen building technique and is the simple combination of sand, clay, and straw. Mixed together, these ingredients create a super durable, long-lasting, heat-tolerant material for building outdoor ovens. (Homes have been built out of cob for thousands of years all over the globe!)

Compared to masonry ovens, which can cost hundreds or thousands of dollars and usually require cement in their construction (which has a huge embodied energy), a cob oven can be made from very simple, recycled, and locally available materials. They require little more than some sand, clay, straw, sawdust, some bricks, and a pile of rocks and few other recycled materials.

So I picked up a copy of Kiko Denzer’s Build Your Own Earth Oven, a little gem of a book covering the construction of cob ovens from the ground up. And in July, after I settled into my new house, I knew it was time to start building this oven I had been dreaming about, so I could finally make pizza the way it was meant to be baked: on a super hot brick hearth. With little more than some clay, sand, sawdust, brick, some recycled beer bottles and old cinder blocks, I had everything I needed to make my own oven. After familiarizing myself with Kiko’s cob oven design, I began building the foundation for my stove from the reclaimed cinder blocks and a few chunks of urbanite. A foundation raises the oven off of the ground and places it at a more convenient working height. (A hearth 40″ off the ground is a good average working height.)

A fire brick hearth with insulation

An insulating layer of beer bottles in a sawdust/clay mortar was assembled on top of the foundation in a ring of cob and beneath the firebrick hearth. The hearth, a simple arrangement of 17 recycled firebricks, would serve as the bottom of the cob oven, where breads and pizzas would bake directly. The hearth bricks were carefully laid on a thin bed of sand, so that they could be gently tapped to be firm and level. (Laying out the beer bottles, and later, filling in with sawdust/clay mortar)

I chose to construct a 22.5″ diameter oven, deciding that anything bigger would be beyond my current needs, and after using it, it’s definitely proven to be the perfect size. You can fit three medium-sized loaves of bread, or one or two small personal-sized pizzas in it at once. And at this small size, the entire mass can be heated to about 700 degrees in two hours of solid firing with good wood.

Before building the actual dome, I made an arched doorway with some reclaimed red brick, mortared with a sand/clay mix. (The doorway is a little narrow at 12 inches wide, but so far everything I’ve wanted to fit has slid right in. And it can’t make really big pizzas, but I’m liking the smaller sized pies.) The cob dome (nothing more than a mix of sand and clay at a 3:1 ratio) was carefully built up around a moist sand form covered with wet newspaper and up against the brick arch. The sand was piled out of the doorway after the dome had dried a bit. (Finishing touches on the clay/sand mortar between bricks, then making a smooth sand form) (Four inches of cob go up around the sand form, and later, the sand is dug out out the dome [interior view])

One more note about the door: the door is a critical 63% of the cob dome height, or 10″ high. (The dome is 16″ high, which is Kiko’s recommendation for cob ovens across the board.) This one measurement is the most critical because it allows the oven to actually draw. You see, the door is left open while the oven is firing, so that cool air is drawn in, and hot air and smoke can pass out the top half of the door. (Larger ovens frequently have a chimney, or you can make a simple firing door to help with draw, too.)

Cob dome insulation and some plaster

A several inch thick (between 2″-4″) layer of insulation (a mix of sawdust and clay slip) went over the whole dome. This layer helps to keep the heat longer, allowing for longer heat and longer bakes. Cob ovens built strictly for pizza don’t require such a layer, and more serious bread bakers may want to double up on insulation thickness, since it will allow for the baking of many loaves. Finally, a thick layer of earthen plaster covers and protects the whole thing. (2-4 inches of sawdust/clay insulation is built up, and next is the nearly finished product with earth plaster and a door)

That is pretty much the whole oven. Pretty simple, huh? Kiko’s book is a fantastic resource for how to build your own, and I highly recommend it. I didn’t work on the oven very inconsistently (due to weather, etc.), but I imagine it took less than a week of actual construction between April and I. (And much of the time is spent waiting for things to dry, too.) 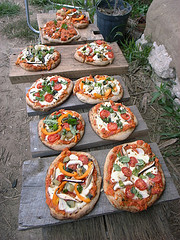 There is nothing quite like wood-fired bread and pizza. Feeding the oven with wood, and watching the fire burn is an awesome experience. When the draw is just right, you can hear a low rumbling of the burning wood within the dome, which is rather powerful.

Other than being stupendous for baking tasty food, the oven is a great example of a simple technology that isn’t dependent on fossil fuels for its building or use. You need only simple natural and recycled materials for its construction, and wood to keep it baking. Getting away from cooking with propane is certainly in my realm of interests, and the oven has proven itself to be an important piece of that goal. This oven encompasses many of my loves: baking, cob, wood energy, and the DIY philosophy. Not only that, it cost less than $20. (The firebricks were the only significant cost at $1 each.)

If you have any interest in baking, especially baking really damn tasty bread and pizza, or baking without propane or other fossil fuels, check out Kiko Denzer’s Build Your Own Earth Oven for complete details and how you can get started! I cannot recommend it enough.

Please view all of the images of the cob oven building process here with more details!

p.p.s.: Want to get learn how to build your very own home with natural materials? Check out these exciting natural building workshop opportunities: a 2012 timber framing workshop, and straw bale  workshops at Dancing Rabbit Ecovillage in Missouri.