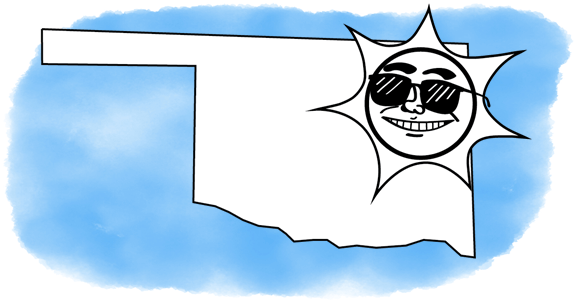 Going solar? Good call. It’s the right choice for your pocketbook and for the climate. If everyone in Oklahoma used solar power, it would take 107 billion pounds of carbon out of the atmosphere every year—according to the EPA’s greenhouse gas calculator, that’s the equivalent of planting a forest that would cover 90% of the state.

Solar power isn’t yet a big part of the energy mix in Oklahoma. Nationally, the state ranks #45 in solar energy use.

The biggest advantage of solar energy? The cost—$0. For the average Oklahoma household, generating all their own electricity with solar would save $1,370/year. Also, you’re doing a favor for the next generation. Instead of relying on natural gas plants, supplied by fracking and offshore drilling, and CO2-spewing coal plants, which produce most of Oklahoma’s electricity, you’ll be producing your own clean, renewable energy. In Oklahoma, residential customers like you account for 19.3% of the state’s total energy consumption.

The disadvantages: The cost of installation. The average solar installation costs around $20,000. Incentives like the U.S. Residential Renewable Energy Tax Credit can bring the overall cost down. Unlike many other states, Oklahoma doesn’t offer incentives or tax deductions for homeowners who choose solar power.

The average Oklahoma family uses 37,933 watts of energy on an average day. And, on average, they’ll get 5.5 hours of sweet Oklahoma sun each day. So, to get enough energy to keep the power running all night, they’ll need their solar power array to generate 6,897 watts of energy per hour while the sun’s out.

To figure out exactly what you’d need based on where you live in Oklahoma—and how much money you’d save—use this solar savings calculator:

Oklahoma lags far behind the rest of the country in solar development, especially in comparison to neighboring Texas, and is not seriously pursuing intentional renewables development outside of tribal areas.

Oklahoma adopted a meager renewable energy portfolio standard in 2010 that required 15% of its electricity to come from renewables by 2015. The goal was met in 2013 (mostly by wind) and has not been expanded or extended since. Utilities were not required to demonstrate compliance with the standard.

Like most states, Oklahoma mandates that its utilities practice net metering. Net metering deducts energy private solar/renewable operators have generated from the total cost of their utility bill and credits those small operators for any excess power generation that goes to the grid at large. Unlike most states, there is no limit on the aggregate capacity of net metering—which means net metering is Oklahoma’s most generous solar subsidy. However, new net metered customers have to pay a fee when they connect their systems to the grid.

Native American tribes, a major demographic in Oklahoma, were the the state’s earliest large scale adopters of solar power. The Delaware Nation adopted 37.5 kW of solar generation capacity in 2011.

In 2017, a solar farm was built just west of Cyril, with the primary goal of understanding the long-term costs of solar. The solar farm will also be used to find ways solar and wind power can support each other.

In March 2017, Oklahoma City Mayor Mick Cornett proposed the idea of adding a solar array to the roof of the new convention center.

In early 2017, a solar farm was built in Marietta with 950 panels and the potential to generate electricity for 35 homes.

The Oklahoma Renewable Energy Council promotes pro-solar and renewables policy in the state.