The medical industry makes most of its money by medicating so-called lifestyle diseases, like cardiovascular disease, high cholesterol, high blood pressure, and diabetes. These diseases also happen to be among the leading causes of death in the U.S. What if instead of popping a pill for these types of chronic illnesses, we used food as medicine?

Over the weekend, I had the pleasure of attending the Food=Medicine Conference here in Atlanta. The focused specifically on how a whole food, plant-based diet can benefit our health. If food as medicine is something you’re interested in, this line-up was star-studded, including Dr. Caldwell Esselstyn, Jr., John Pierre, Brenda Davis, R.D., Dr. Richard Oppenlander, and Rich Roll.

Why Food As Medicine?

Dr. Caldwell Esselstyn, Jr. calls a whole food, plant-based diet a revolutionary treatment and preventive for disease. He describes the current situation in medicine as “pharmageddon,” pointing out that we have had stents, statins, and bypass surgery for decades, but heart disease is still the number one killer in the U.S. That implies to him that we aren’t treating it properly.

He describes cardiovascular disease as a food-borne illness, and points to profound evidence that animal protein and animal fat are the culprits behind this and many of the other lifestyle diseases costing us billions of dollars and thousands of lives every year.

The doctors, registered dietitians, and nutritionists who spoke this weekend stressed over and over that a switch to a plant-based diet is key to solving our country’s health crisis.

Each of the talks over the weekend was unique, but there was a common thread woven through all of them: a healthy, plant-based diet can mitigate and often even cure lifestyle diseases. 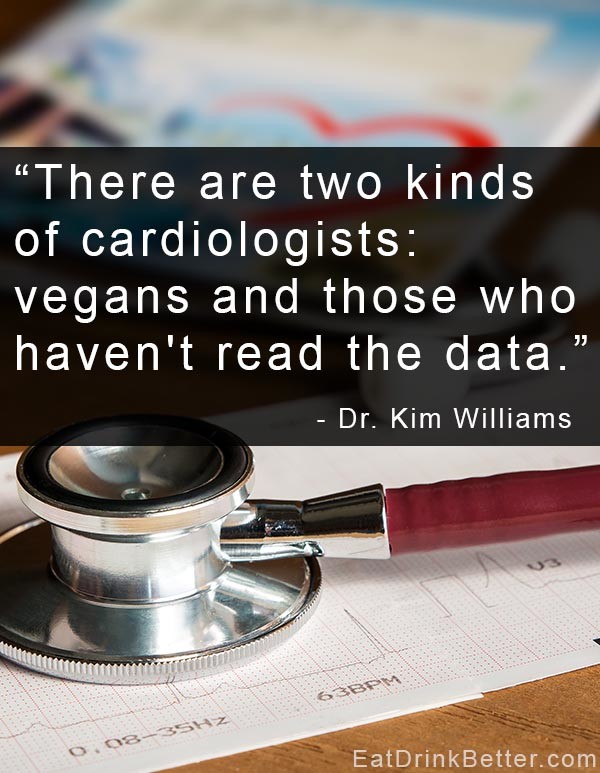 The doctors who spoke at this conference have treated thousands of patients for heart disease, diabetes, and high blood pressure simply by using food as medicine. By switching from the Standard American Diet (SAD) to a low fat, plant-based diet, their patients were able to reduce and often even completely get off of their medications. People who were told that they’d have to pop pills every day for the rest of their lives were able to live medication-free just by changing what they ate.

One thing many of the doctors stressed over the weekend was that food as medicine can work in concert with conventional medicine. If you’re having a heart attack, for example, a kale salad is not going to save your life. If you survive the heart attack, though, a shift to a plant-based diet can help you undo some of the damage that a western diet has wreaked on your body.

If you’re a regular reader here, you know that most physicians don’t receive much, if any, practical nutrition training at school. What they do learn about are medications and procedures. That lack of knowledge is passed on to their patients. The good news is that this is slowly changing. Dr. Kim Williams, president of the American College of Cardiology, summed the situation well: “There are two kinds of cardiologists: vegans and those who haven’t read the data.”

Dr. Williams wasn’t the only cardiologist that spoke over the weekend. One of the most compelling talks of the weekend was the last session on Sunday, where Dr. Baxter Montgomery shared the story of how he became interested in using food as medicine: he watched his mother die from a combination of the SAD and overmedication.

Dr. Montgomery now runs the Montgomery Heart & Wellness Center, where he literally prescribes food to cardiac patients. In addition to the standard work-up you’d get at any heart doctor’s office, Dr. Montgomery takes the time to assess exactly what you’re eating. From there, he tailors his food prescription to the patient’s condition. He will also adjust medications before and during the program. He’s often able to taper patients off of their meds within months or sometimes even weeks.

Not only did these doctors see improvement in illnesses like heart disease and diabetes, but their male patients were able to stop taking medication for erectile disfunction and every single person they treated lost weight.

In his talk, Dr. Michael Greger touched on another common pro-meat argument: moderation. He explained why this was not an viable option to truly reverse the damage that the SAD does by likening animal foods to a hammer: “Sure, you can choose moderation and hit yourself with a smaller hammer, but why beat yourself up at all?” He gets into this in more detail in this video on his site.

Making The Leap To A Plant-Based Diet

For someone who eats the Standard American Diet (what Rich Roll called “the window diet”), switching to a diet of plant foods is not easy at first. Eating animal foods changes our palates. For someone who eats a Big Mac everyday, steamed broccoli is not going to taste good. Our brains become addicted to the artificial dopamine stimulation we get from eating animal foods and refined foods.

During the Q&A at the end of the weekend, one person asked what the most important thing someone eating the SAD should change, and they agreed on two things:

A lot of folks feel like going vegan has to be very expensive, and it certainly can be. That’s why I love what Lindsay S. Nixon, aka The Happy Herbivore, had to say: “Eat the best plant foods you can afford…it’s not about perfection.”

She also encourages you to “Say yes to the potato!” She means that if you can afford to buy all organic, local vegetables, by all means do! But if reaching for that conventional bunch of collard greens at the grocery store is what’s in your budget, then by all means do it.

My question during the Q&A panel was about B12. There wasn’t much mention of this nutrient in the talks over the weekend, and it is one thing I am always looking for the latest information on. Vitamin B12 is the only nutrient that our bodies can’t produce and that isn’t available from non-fortified plant foods. Everyone on the Q&A panel agreed with these recommendations:

Cyanocobalamin seems to be the type of B12 that most nutritionists are recommending right now. If you can’t find it in stores, this one on Amazon meets the recommendations and includes a few other B vitamins to boot.

The longer answer is that most Americans eat far too much protein. If you are worried about protein, though, you can get more than enough from plant foods. Just ask NFL defensive lineman David Carter where he gets his protein.

If you need more ideas about where to get protein on a vegan diet, check out this allergy-friendly protein cheat sheet or check out Tanya’s in-depth look at how we can thrive on plant-based proteins.