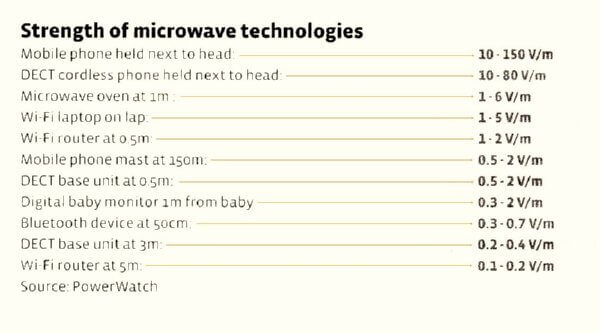 Radiation from cell phones has been getting a lot of press of late but according to the BioInitiative Report cordless phones look to be just as dangerous as cell phones when it comes to brain tumors and acoustic neuromas.

DECT technologies originated in Europe and have since been widely introduced throughout the world. Today more than 800 million DECT systems are in use.(1) The pulsed frequencies of electromagnetic radiation used in DECT technology are in the microwave band, as are cell phones.

Oversight For Phone Safety Is Lacking

The ICNIRP (International Commission on Non-Ionizing Radiation Protection) is responsible for monitoring and creating guidelines for radiation technologies. The ICNIRP guidelines focus exclusively on high frequency radiation and thermal activity. But many scientists have been pointing out that pulsed microwaves at low frequencies are also cause for alarm. Yet there are no guidelines for non-thermal, low-frequency radiation. Anotherwords, the only tests performed for these technologies are thermal (testing whether the radiation can heat an object and cause harm due to that heating) or for frequency and height (if the wave length is high and close together radiation causes immediate harm). Gamma waves are high frequency as they are generated by radioactive atoms in nuclear explosions. So, heat and frequency/height are the only two criteria the commission tests for.

Since the commission does not consider whether pulsed low-frequency radiation is harmful or not, industry studies have in the past tried to tell us they are not…

What Is Electromagnetic Radiation?

Just as a refresher course: — electromagnetic radiation consists of an electrical field plus a magnetic field which each oscillate perpendicular to one another as they travel through space. Amplitude is the height or breath of the wave. As said above, frequency is the waves per specific time frame, usually seconds, from extremely low frequency radiation (ELF) which have longer wavelengths (longer wavelengths are measured in megahertz) up to short gamma rays where the wavelengths are extremely close together. Rays with shorter wavelengths can carry more information and more energy.

As can be seen below, the electromagnetic wavelengths we can see are certainly a very small portion of what is going on out there…

Note how the microwave spectrum blends in with the radio spectrum…

Why Are DECT Phones Dangerous?

DECT (Digital Enhanced Cordless Telecommunication) phones are cause for concern in that the base station is usually kept in a convenient spot close by such as on a bedside table, or on your desk, or in the kitchen. The base stations of all older and most current models continually emit radiation even when not in use. And when a DECT phone is in use, the unit continuously radiates at high power from handset to base station. Even cell phones power down when close by a base station. Cell phones radiate on high when they are furthest away from a tower (fewer signal bars) and this is when you should not be using them, as that is when the radiation is strongest, as cell and tower are struggling to communicate with each other. DECTs are always on high power when in use. See end of article for the one phone I found that does power down.

There are two factors to be aware of in regard to wireless technologies. There is the radiation between handset and base station and then there is the information-carrying radio wave (ICRW). Microwave radiation carries the voice/data information by means of modulations. Scientists are now observing that pulsed information transfer by microwaves triggers biological effects. (2) Even the lowest pulsed frequency might not be safe. Wireless technologies pulse radiation in an organized fashion and these pulses interfere with the various biochemical processes going on in the body. (2) Just as electromagnetic interference from wireless technologies interferes with an airplane’s or a hospital’s equipment — so too with our inner processes. We are electrochemical/electromagnetic creatures, as can be experienced when hooked up to a electroencephalogram (EEG, a test that measures and records the electrical activity of the brain) or an electrocardiogram (EKG or ECG, a test that checks for problems with the electrical activity of the heart).

Studies About Electromagnetic Waves In Phones

Over 1000 medical doctors in Germany have endorsed the Freiburger Appeal, which postulates that people’s exposure to electromagnetic fields (mainly mobile/DECT) — is triggering widespread illness…

Out of great concern for the health of our fellow human beings do we – as established physicians of all fields, especially that of environmental medicine – turn to the medical establishment and those in public health and political domains, as well as to the public. We have observed, in recent years, a dramatic rise in severe and chronic diseases among our patients, especially:

Moreover, we have observed an ever-increasing occurrence of various disorders, often misdiagnosed in patients as psychosomatic:

Since the living environment and lifestyles of our patients are familiar to us, we can see – especially after carefully-directed inquiry – a clear temporal and spatial correlation between the appearance of disease and exposure to pulsed high-frequency microwave radiation (HFMR), such as:

No Consensus On Cell Phone Safety

There are currently many conflicting reportsregarding the dangers of RF (radio frequency) and microwave technologies. The International Agency for Research on Cancer (IARC) recently published the Interphone study which looks at mobile phone use and brain cancer risk. The Interphone International Study Group, is made up of 21 scientists, from 13 countries. On the first page of the report it reveals that 5.5 million € of its funding was contributed by industry sources. Of the 5.5 million €, 3.5 million € was contributed by the Mobile Manufacturers’ Forum (MMF) and the Global System for Mobile Communication (GSM) Association. Many feel the project has tarnished the agency’s reputation and scientists within Interphone have come to differing conclusions as to whether cell phones present a cancer risk.(4) 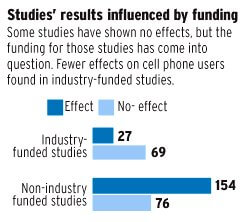 The Environmental Working Group’s Cell Phone Radiation Science Review is a great place to read: a synopsis of industry and private studies.(5)

The Federal Communications Commission established radiation standards for cell phones in 1996. The agency set basic standards as per recommendations of the IEEE (a professional association for the advancement of technology) and the ICNIRP. These standards (also known as SAR, or Specific Absorption Rate) allow a 20-fold higher maximum exposure to the head (1.6 W/kg) compared to the rest of the body (0.08 W/kg). This standard clearly does not take children’s safety into consideration as can be deduced from the illustrations below.

Children are more susceptible! As can be seen above, children have surprisingly thin skulls. Their nervous system is still developing, their cells are dividing more rapidly, and their immune systems are still undeveloped.** According to a recent study, bone marrow in a child’s skull absorbs 10 times more microwave radiation than does an adult.www.environmentalhealthtrust.org

For many millenia we have evolved without the constant stream of pulsed low frequency radiation bombarding our cells, without chemical additives settling into our organs, without genetically modified plants as our food source and without antibiotics being forcefed to livestock forever making those antibiotics useless defenders against ever new strains of infectious agents. All the above weaken our defences and leave us vulnerable to extinction!

Which DECT Phones Are Safe?

I thought the Siemens Gigaset was the only safe DECT in the U.S., as they say so on their website:

But it appears it is not. Here is a response I received from Siemens, March, 2013.

Thank you for posting your question to Gigaset support. Unfortunately, radiation-free feature is not available in the USA but there is a mode of the phone which reduces the radiation by 80 percent when you are not making calls. When there is a call the radiation is normal as on any other phone but when the phone is in idle mode the radiation is reduced. When the handset is off and base station unpluged there is no radiation emition at all.

Should you have any further questions, queries or suggestions please do not hesitate to contact us and we will be more than glad to assist you in any way we could.”

I wrote to Panasonic questioning what Eco Mode meant. Panasonic wrote back that their “Intelligent Eco Mode feature automatically lowers the power consumption when you’re using the handset close to the base unit.” As a cell phone does when you are close to a cell tower. This is a plus — but would be nice if the headset did not radiate 24/7 as well. See explanation on Panasonic site: panasonic.ca

I questioned another company asking —
On Amazon you say your  DECT … is Eco-Friendly.
What do you mean by that? Does the base shut off when not in use?
And they wrote back saying:

“Amazon actually puts their own product description of what they sell on their website. It would be best to contact Amazon on what they mean when they state this. The only term we use when using ‘Friendly’ is ‘Wifi-Friendly’. What we mean when we say Wifi-Friendly is that the phone should get rare, if at any interference, with a Wifi network.”

Symptoms reported by Students exposed to WiFi in Classrooms

**     A Tale of Two Countries: Wired vs. Wireless Internet in Schools
www.whyfry.org