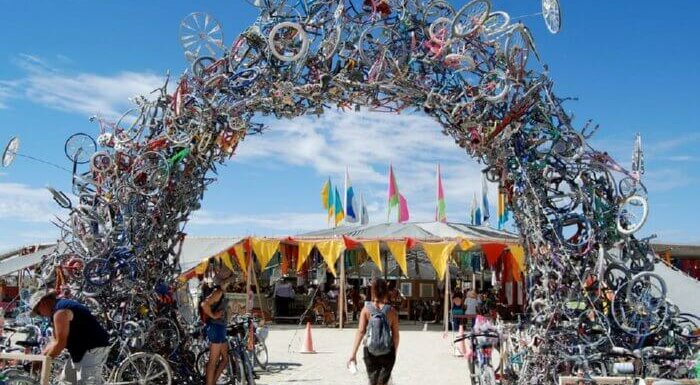 Every year about 109 million bicycles are produced, and 140 million people are born. That adds up to lots of extra bikes to make art with. Bicycle Shop Germany
Christian Petersen admires the facade of the bike shop he co-owns in Atlandsberg, north east of Berlin. How they get the bikes down when needed is an unknown! Originally found at “pixdaus.com/single.php?id=258207” Bicycle Furniture Tubes as cushions, wheels as frame.
By Andrew Gregg – designs many great pieces – check out his site…
www.bikefurniture.com Bicycle Gate
Popular design for the wheels keep the gate up off the ground.
www.funfunpics.blogspot.com It took nearly four months of welding to manufacture. Could be the look of the future, obelisks of waste. Picture originally found on Flickr at “flickr.com/photos/23987787@N07/5215726478/” Bike Cart – After shopping, for flat lands only.
Instructables – How to… www.instructables.com