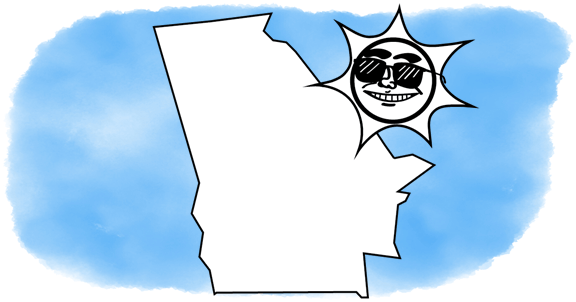 Going solar? Good call. It’s the right choice for your pocketbook and for the climate. If everyone in Georgia used solar power, it would take 132 billion pounds of carbon out of the atmosphere every year—according to the EPA’s greenhouse gas calculator, that’s the equivalent of planting a forest that would cover all of the state.

Solar power is a growing part of the energy mix in Georgia. Nationally, the state ranks #23 in solar energy use.

The biggest advantage of solar energy? The cost—$0. For the average Georgia household, generating all their own electricity with solar would save $1,610/year. Also, you’re doing a favor for the next generation. Instead of relying on coal and natural gas plants, which produce most of Georgia’s electricity, you’ll be producing your own clean, renewable energy. In Georgia, residential customers like you account for 26.1% of the state’s total energy consumption.

The disadvantages: The cost of installation. The average solar installation costs around $20,000. Incentives like the U.S. Residential Renewable Energy Tax Credit can bring the overall cost down. Check with your local government about financing, as Georgia permits them to offer low-interest loans for energy efficiency projects.

The average Georgia family uses 38,400 watts of energy on an average day. And, on average, they’ll get 5.5 hours of sweet Georgia sun each day. So, to get enough energy to keep the power running all night, they’ll need their solar power array to generate 6,982 watts of energy per hour while the sun’s out.

To figure out exactly what you’d need based on where you live in Georgia—and how much money you’d save—use this solar savings calculator:

Georgia is one of the best Southern states for solar, but could do more to increase its installation and generation.

Like most states, Georgia allows its utilities to provide net metering—but it does not require it. Net metering deducts the value of energy that property owners generate from their utility bill, and credits them any excess power generation they send to the grid. Instead of net metering, which requires utilities to pay their customers for energy at the same rate at which they are charged for utility-generated energy, Georgia’s bidirectional metering system allows utilities to “negotiate” the rate at which they will pay back customers for generation. That amount tends to be a pittance.

Glen Raven, Inc., a fabrics manufacturer, will install a 1 MW solar farm at its production facility in Anderson.

In September 2016, Kings Bay Naval Submarine Base began construction on a $75 million solar energy facility that will cover 254 acres.

Students at Georgia Tech have been building a solar-powered home on campus since 2015 as part of the US Department of Energy’s Solar Decathlon.

In 2017, testing of a solar road has began in West Point. 18 miles of Georgia highway is being used to test the solar panel road.

Georgia is home of an active chapter of the Solar Energy Industry Association (SEIA).
Environmental advocates like the Sierra Club, Environment Georgia, and Citizens’ Climate Lobby are active in lobbying for pro-solar measures in Georgia.