You are here: Home / Building / Shed of the Year

UPDATE: After readers voted, the 2016 Shed of the Year Finalists have been named. Next, a panel of shed experts will pick winner. While we make no claim to shed expertise, here’s who we’d choose in each category:

2016 Shed Of The Year Finalists 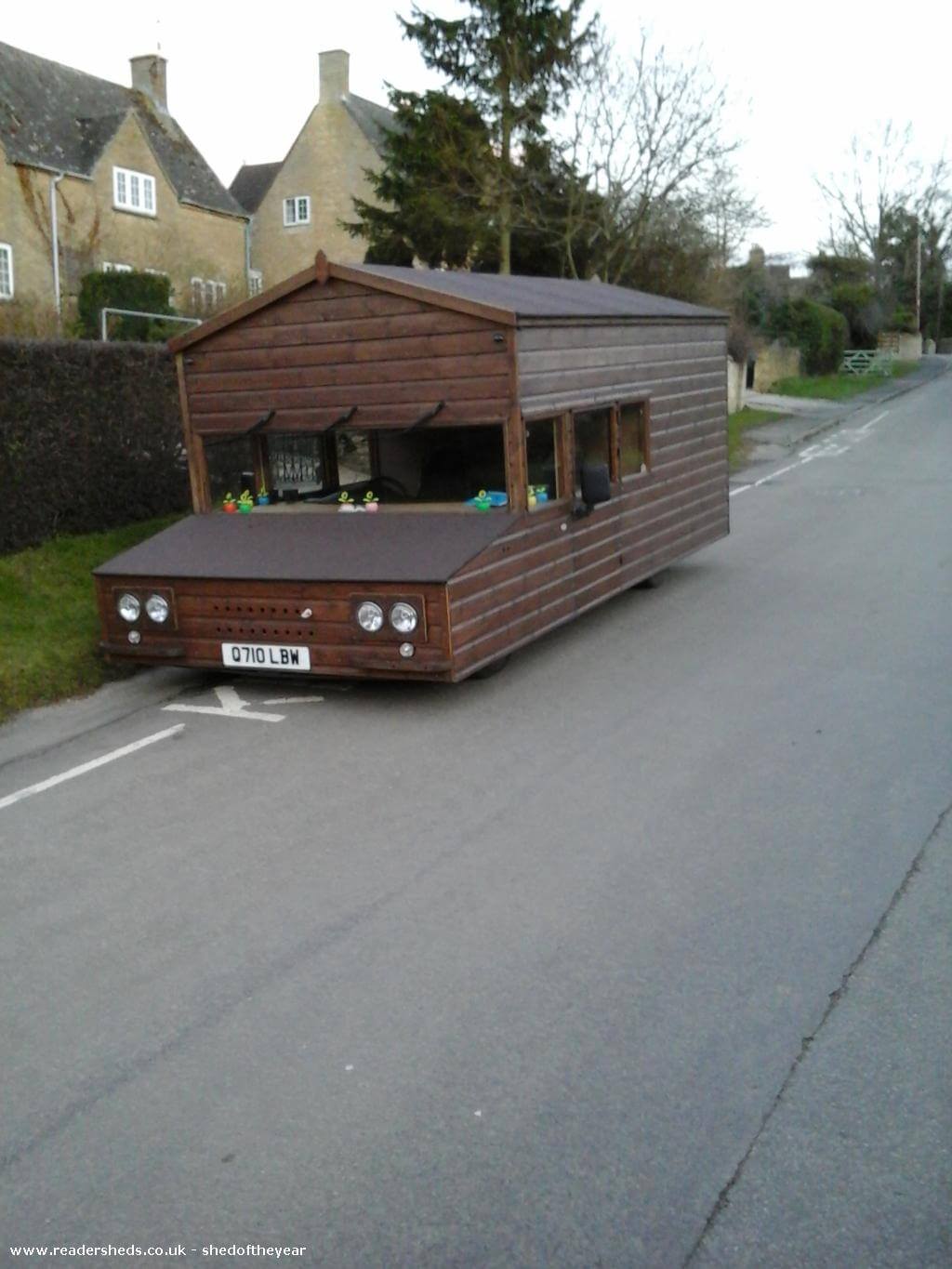 Unique: A 100% road-legal shed, claims its builder, who also claims he can drive it up to 100 mph. Via Readersheds. 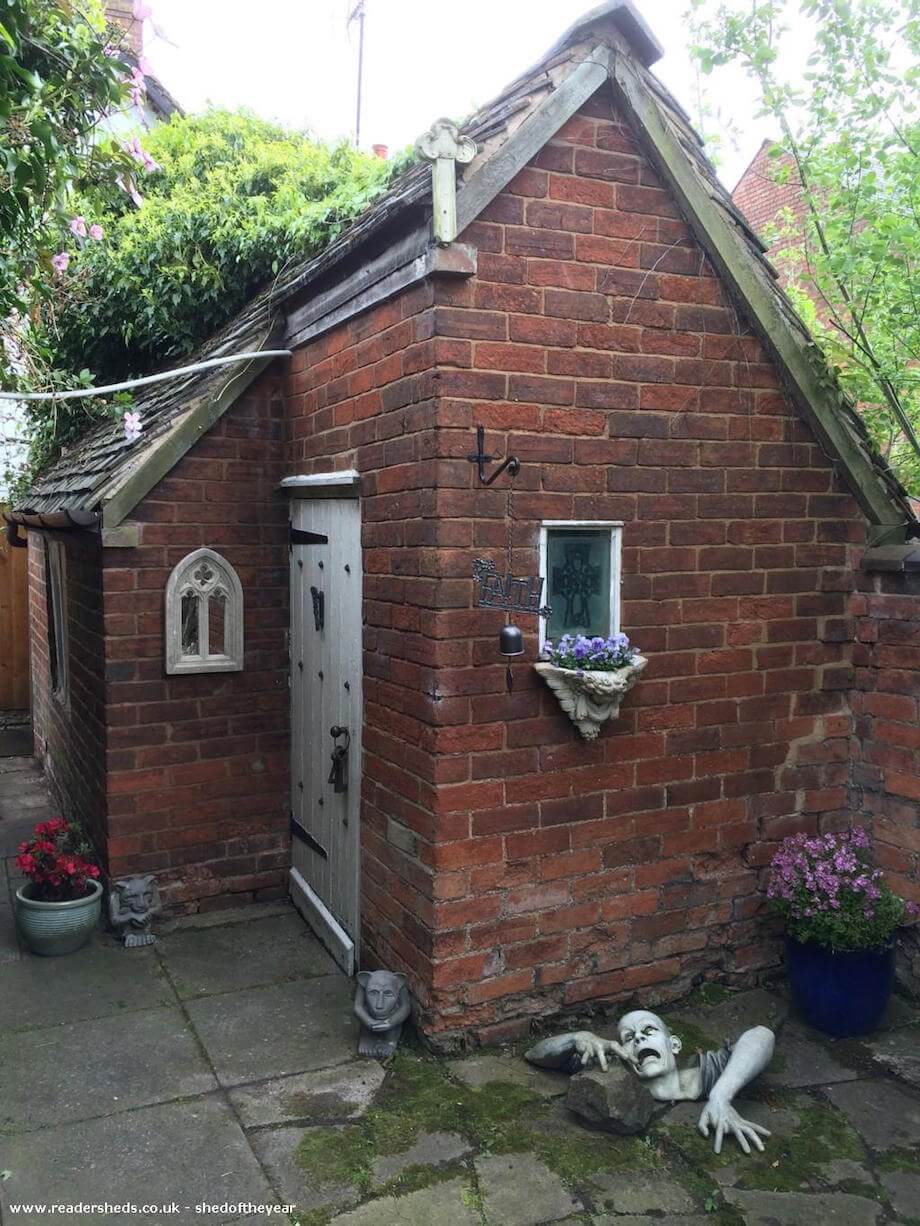 Unexpected: This chapel is already a little creepy, so the owners decided to up the creep factor with a zombie attach. Via Readersheds. 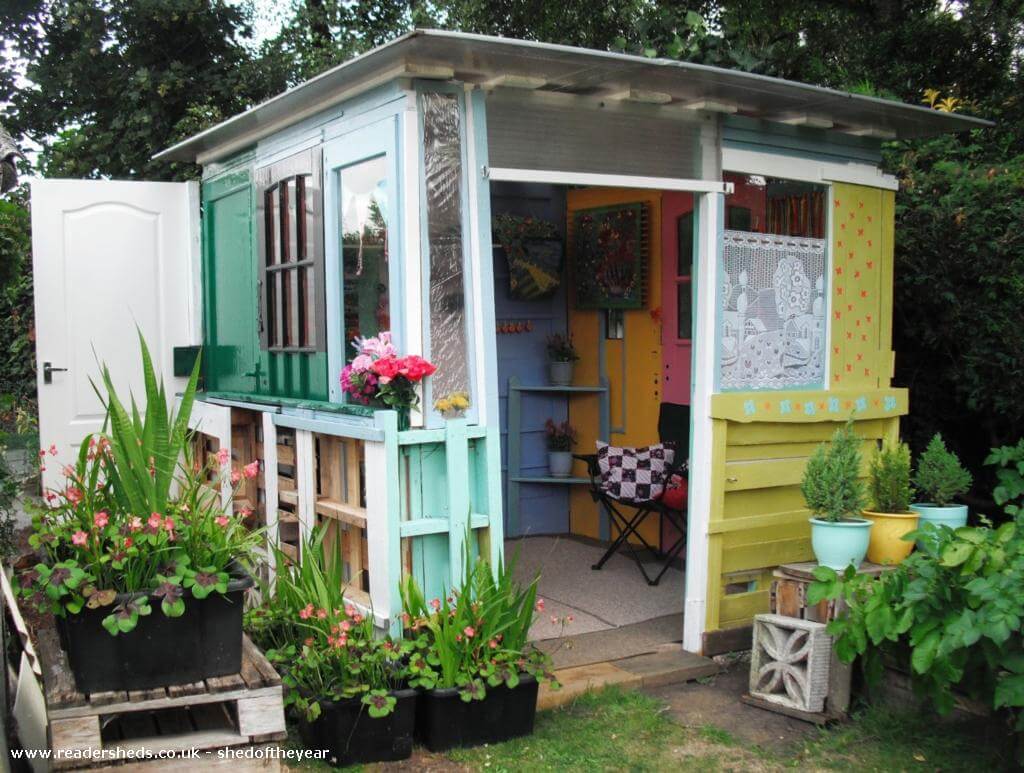 Budget: The owner of this shed claims to have had no specific plans and just fit the pieces together as she was able to find them. Via Readersheds. 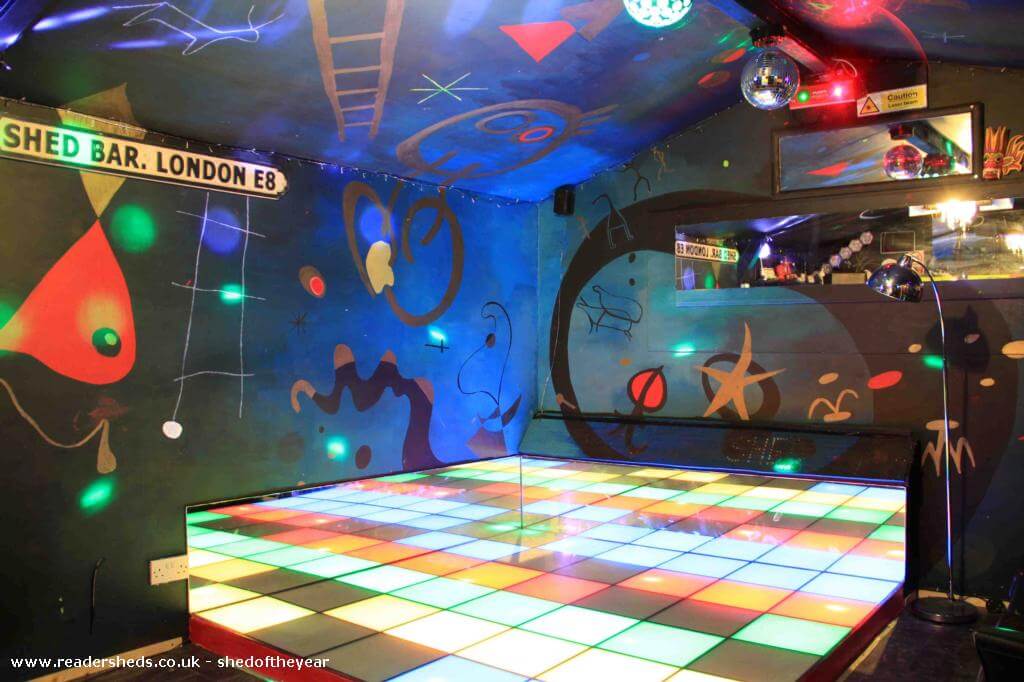 Pub/Entertainment: Rather than a tired old replica British pub, these folks built a swingin’ sixties’ style party room. They say some of the UK’s hottest DJs have appeared there. Via Readersheds. 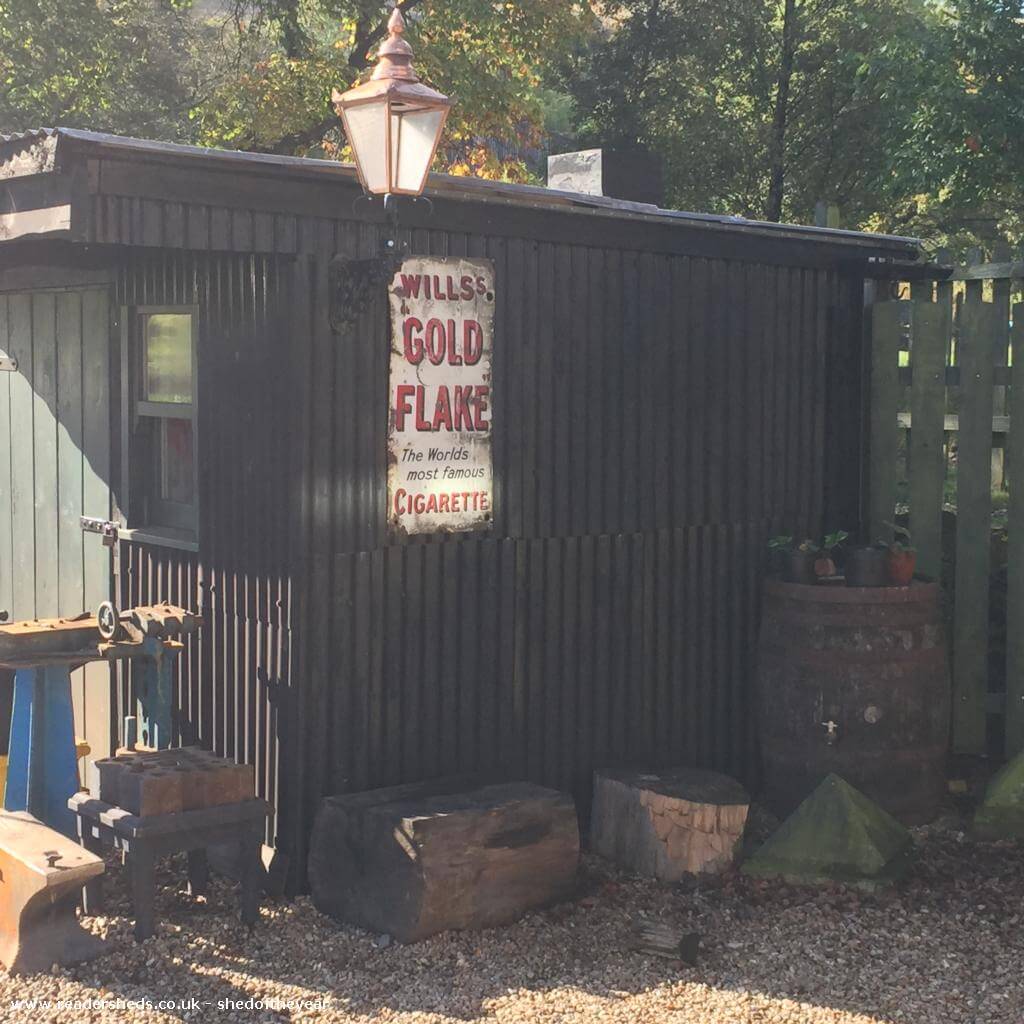 Workshops/Studios: This also could be in the “historic” category, it’s a replica of an old smithy using materials salvaged from a military surplus shop. Via Readersheds. 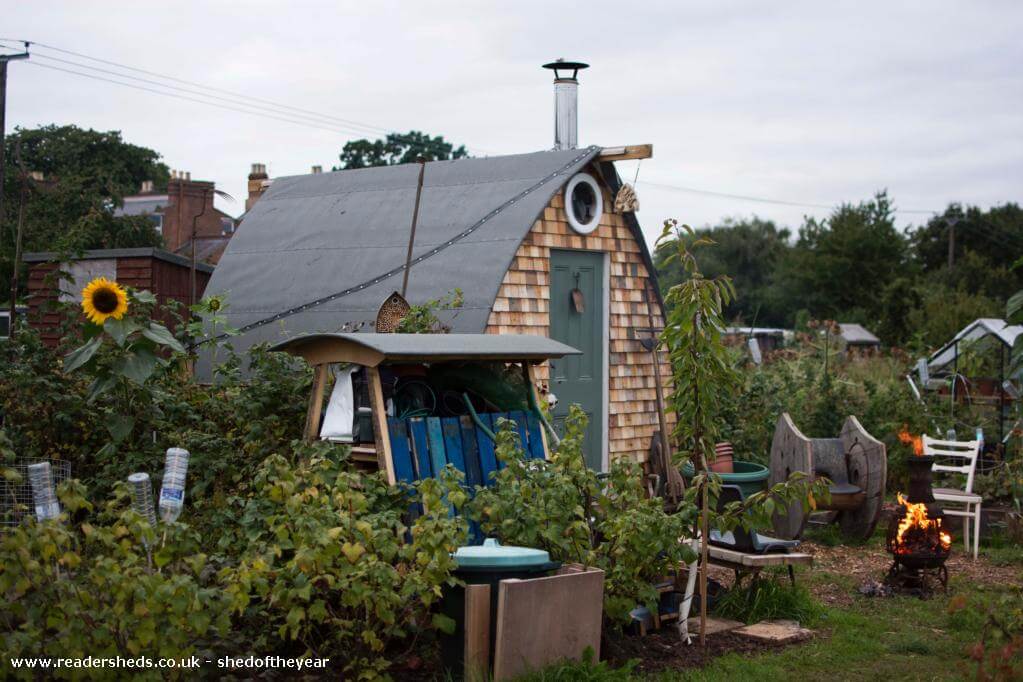 Cabin/Summer House: We like the simplicity of this shed. The builder worked on it part-time at the college where he works and did it in one term—more than most of the students accomplished, I bet. Via Readersheds.

Here’s a time-lapse of his construction process. 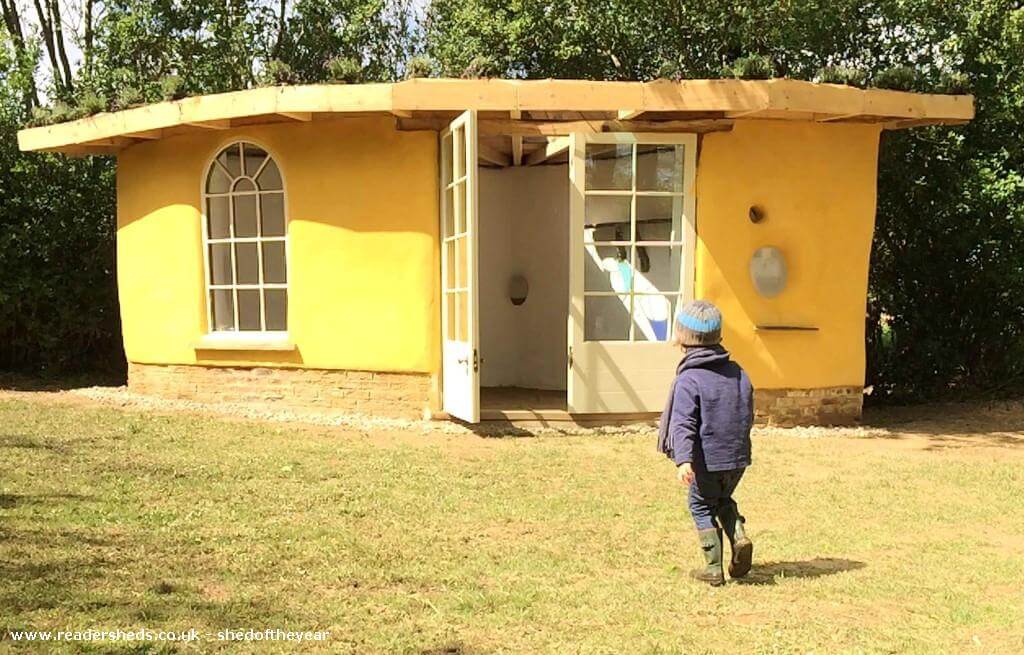 Eco: This cob house was built entirely from soil on the property. Now that’s eco-building. Still, the owners didn’t skimp. The interior of the home includes natural wood and a built-in cob pizza oven. Via Readersheds. 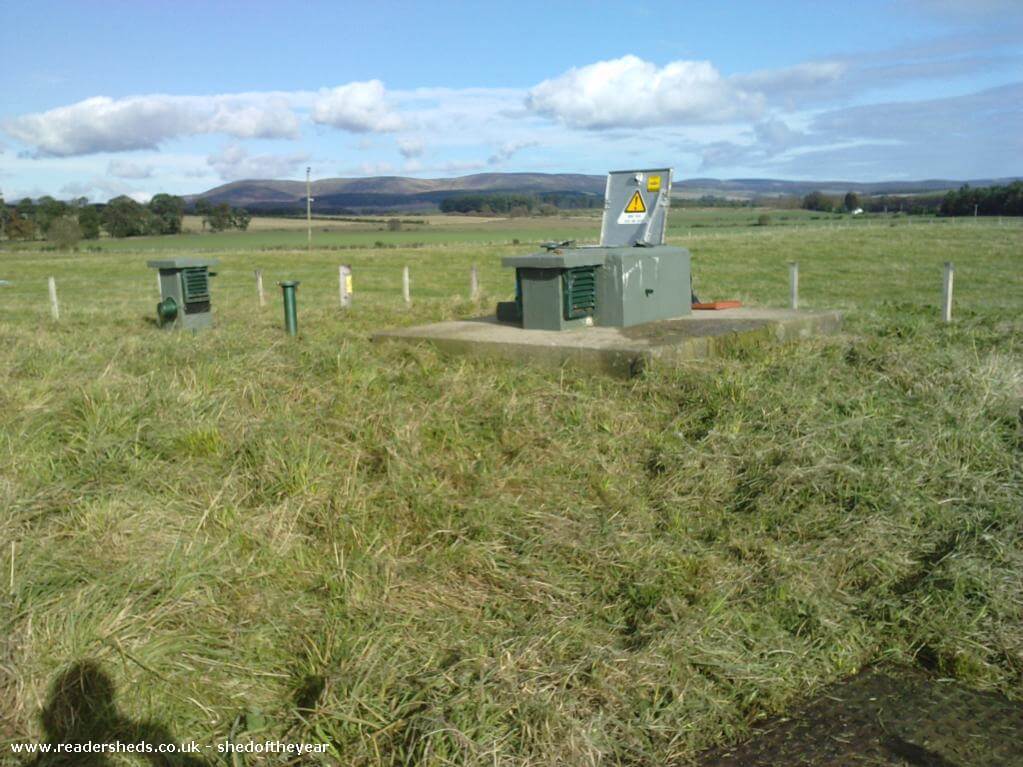 Historic: Where’s the shed, you ask? It’s underground. The man behind this shed leases an old nuclear bunker for $1/year from the local government, and he’s outfitted it with a generator for comfort. The structure itself is a historic landmark. Via Readersheds.

Winners and nominees from previous Shed of the Year Contests 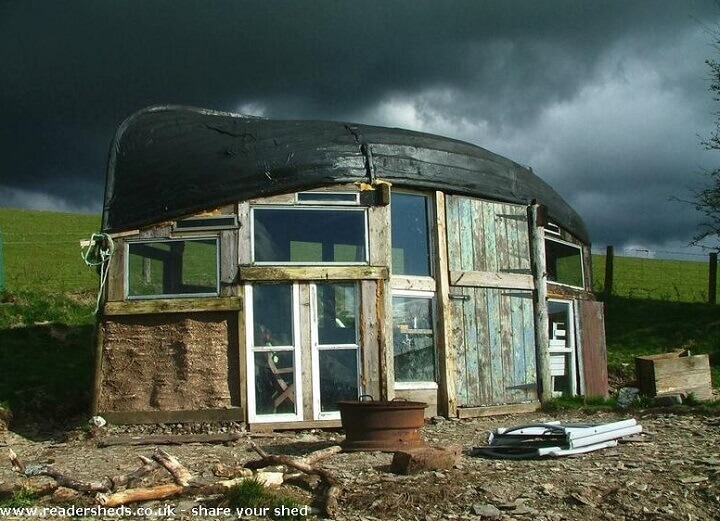 Boat roofed shed by
Alex Holland. Winner shed of the year 2013.
The roof is an upturned 14 ft by 7 ft wide clinker fishing boat from the early 1900s placed on a frame of old telephone poles. Windows were recycled from a 1940s caravan and an old farm house. Walls are wattle and daub. It is located at an altitude of 750ft in Wales, UK. It is full of nautical nonsense befitting a boat turned upside down up a mountain! It has a 20w solar panel trickle feeding a battery. The chimney is an old queen pole from a circus big top that used to house elephants know as ‘The elephant shed’! The shed is made completely from recycled materials. readersheds.co.uk 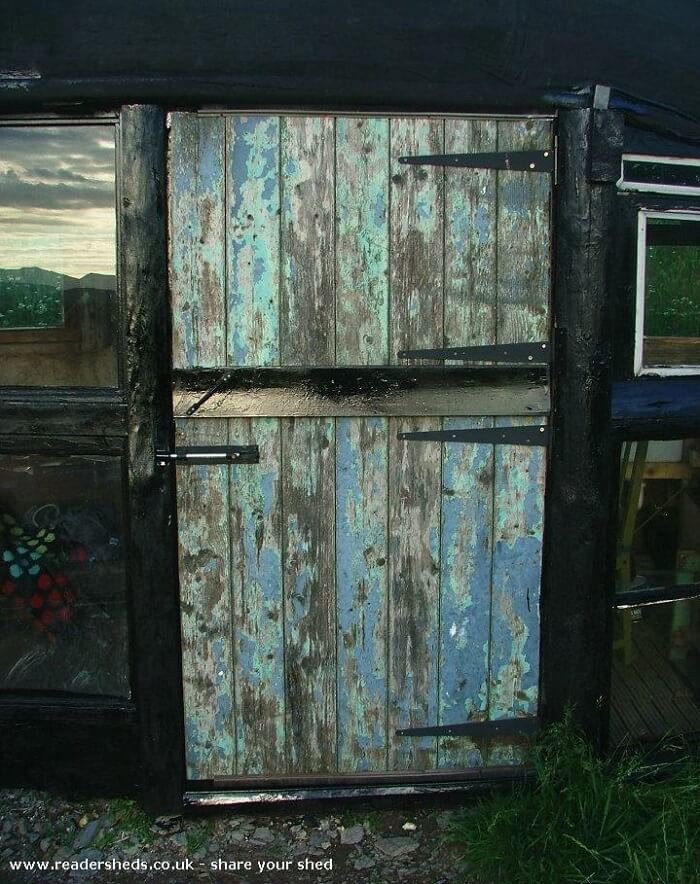 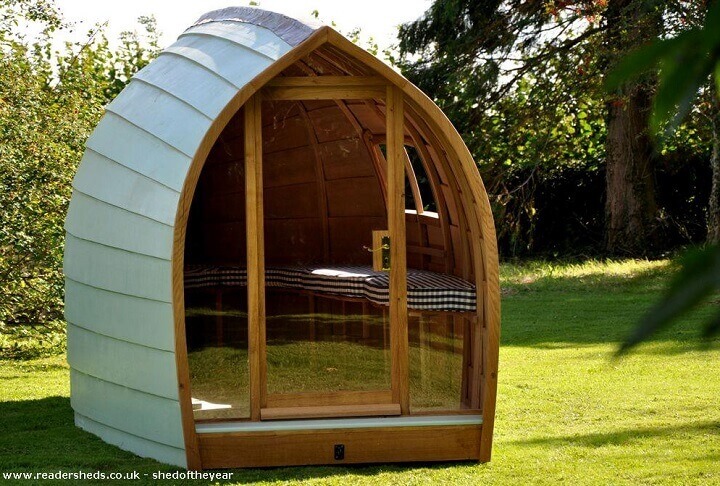 Boat shaped shed on wheels
by Mark Rowland.
Entered in Shed of the year 2015.
Steamed timbers with a copper keel cover.
readersheds.co.uk</i 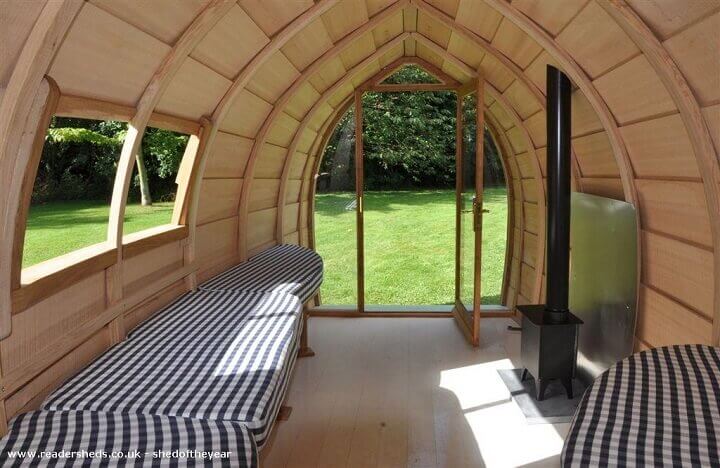 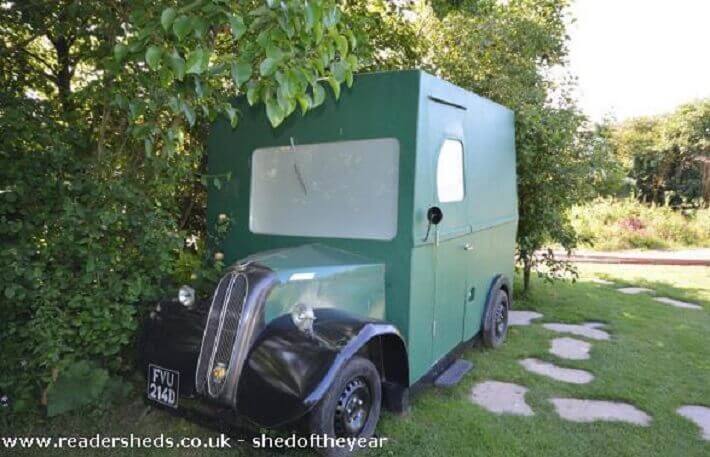 Bathroom shed
by Steve Marples and Gina Biddick.
Based on a Ford Thames van and houses a bathroom with shower. 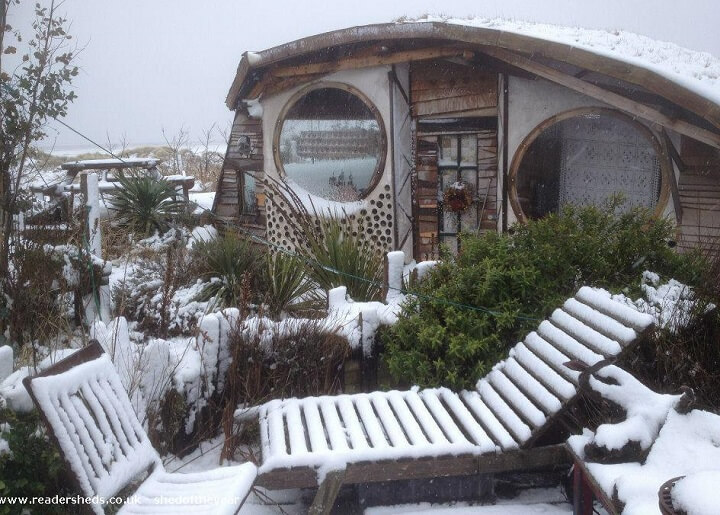 Owl House.
This shed is a finalist in Shed of the year 2015.
Made entirely from cob, recycled plywood, recycled glass bottles with a living green roof. readersheds.co.uk

Rammed Earth Shed.
This shed is a finalist in Shed of the year 2015.
By Michael Thompson (who gives courses).
Michael says “It just turns out that when you strive to save money, you usually end up saving the planet by accident. When I embarked on this journey, I hadn’t visited any existing rammed earth buildings or attended any courses to learn what to do and when to do it. I just took the plunge and gave it my best shot. 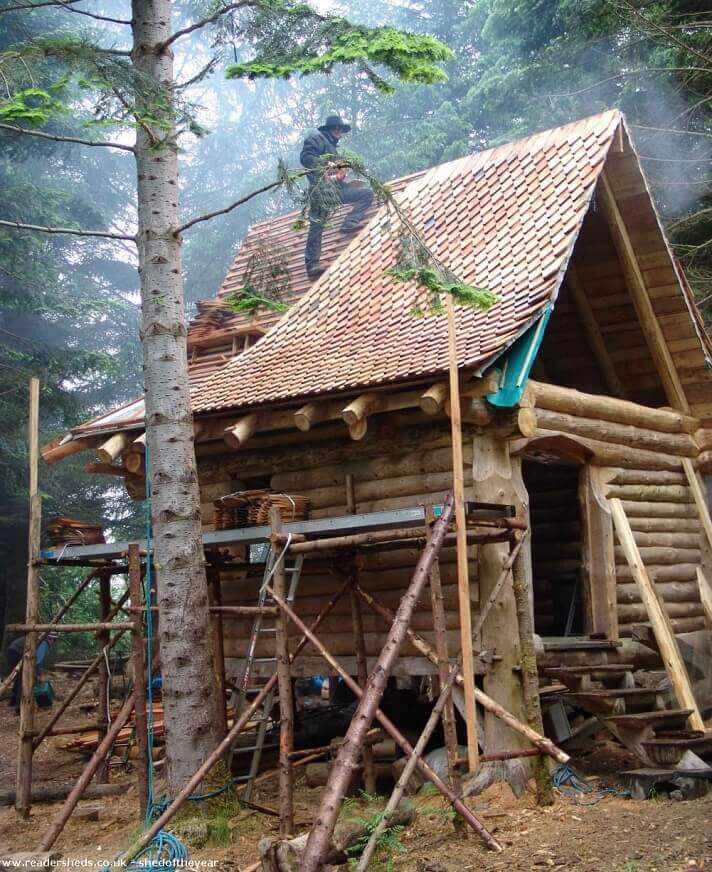 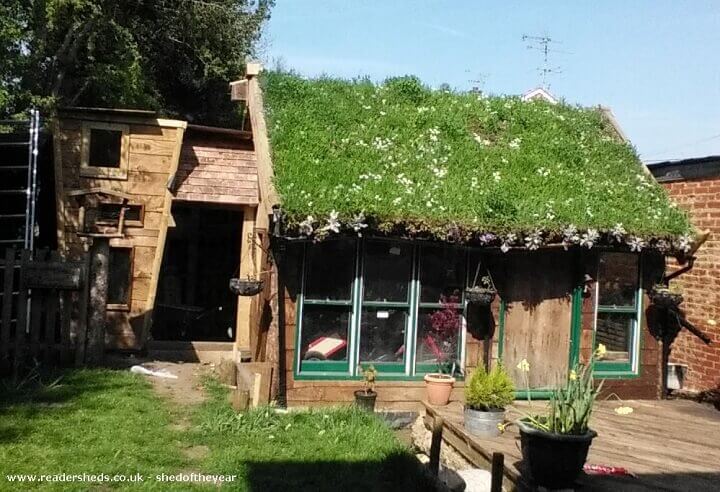 Shed with green roof
by Kevin Herbert.
Made form recycled materials acquired over an 8 year period. For the wildflower roof, Kevin collected 4 pint milk cartons, cut them in half and then filled with earth, the cartons helped stop the soil from slipping off the pitched roof. 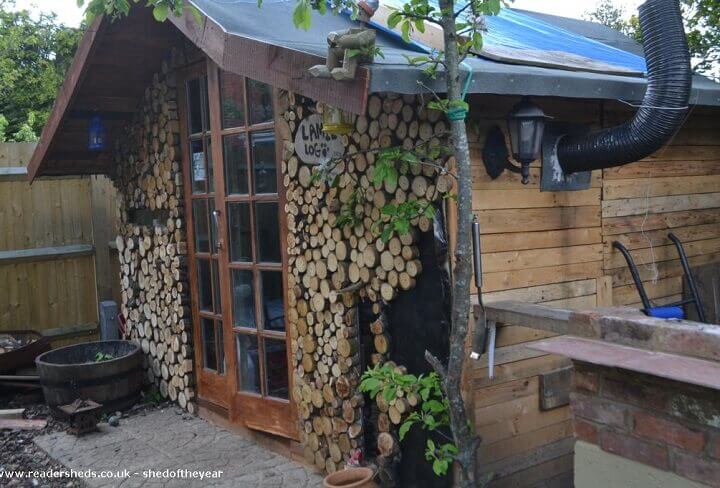 Pallet and log cabin by Steve Prout.
Almost near completion. All pallet construction with the exception of the logs, timber frame and roof beams. readersheds.co.uk 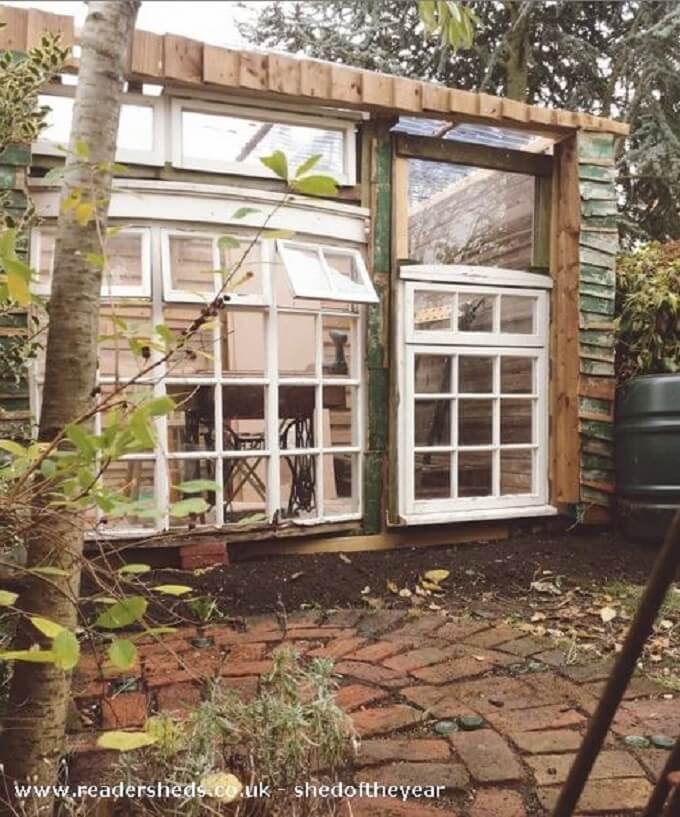 Salvaged window shed
by Tim Cochrane.
Made from old Pallets and scaffolding boards and the next door neighbor’s old bay windows. Tim had never built a shed before. It was made up as he went along. Congrats! readersheds.co.uk 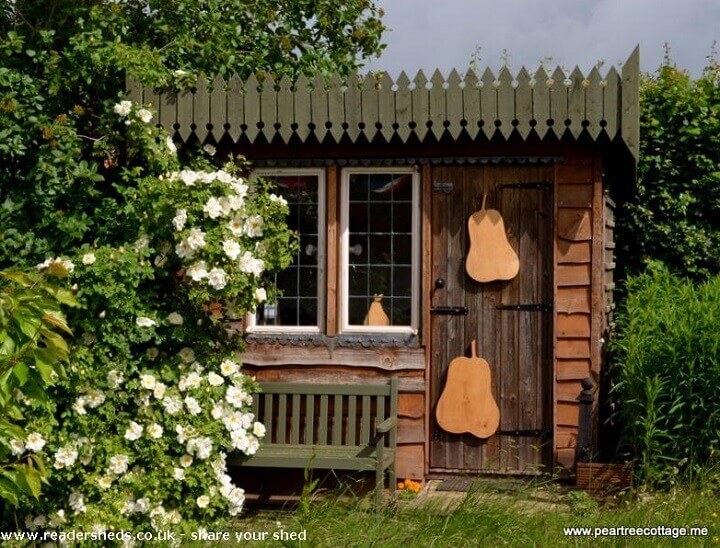 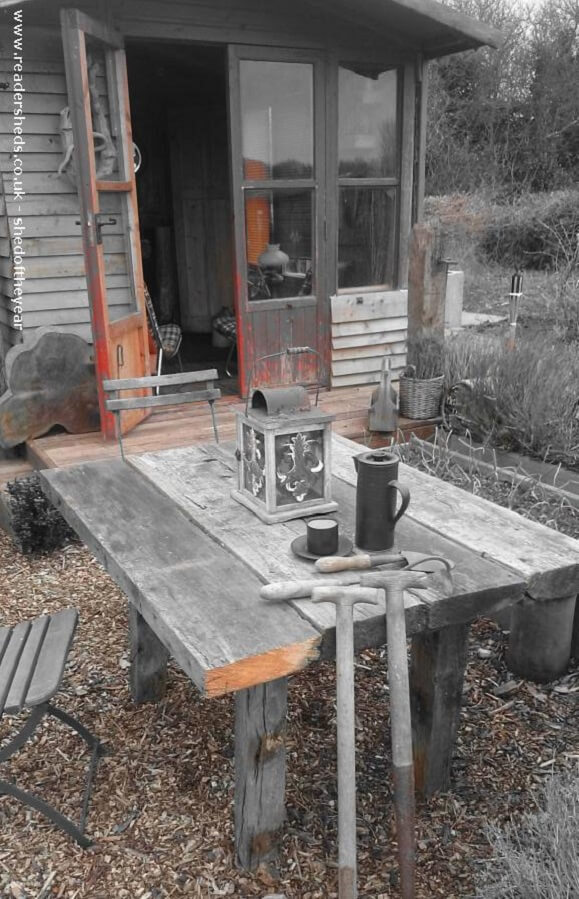 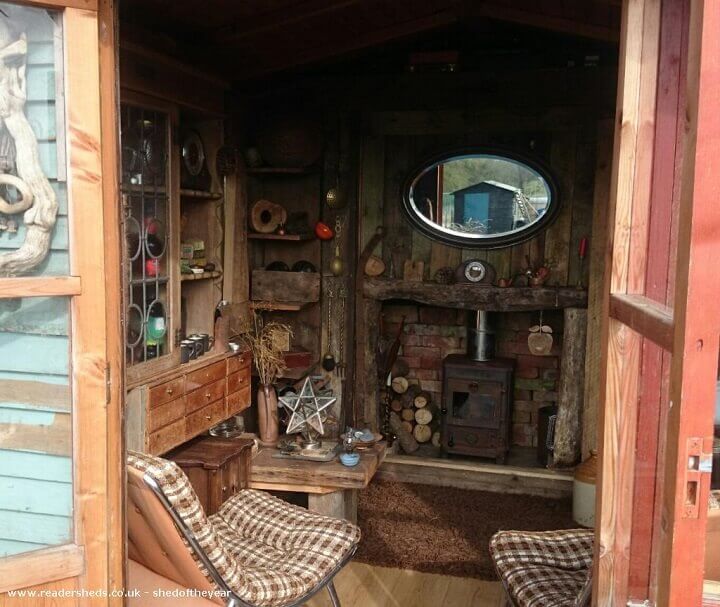 Salvaged wood shed
by Christopher Bustin.
Interior of above shed. 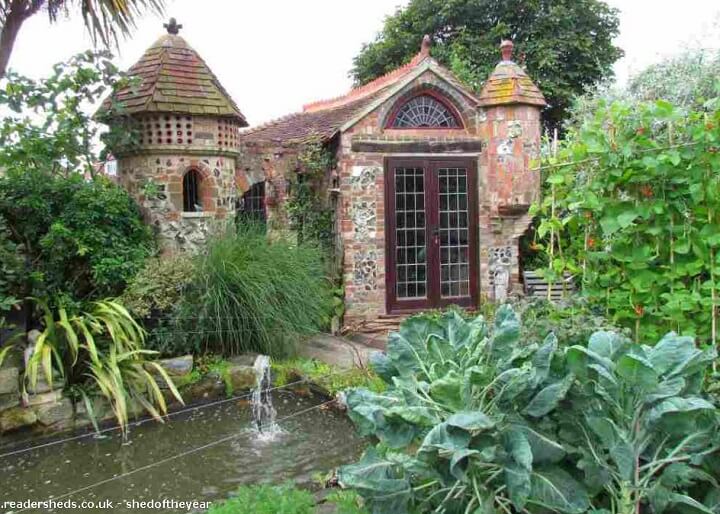 Recycled Brick Potting Shed
by Timothy Blewitt.
Goring Folly consists of a tower with spiral steps leading down to a natural well, linked by a ‘ruined arch’ to a two roomed potting shed. Constructed with locally reclaimed materials over the course of one year. Most materials were free from skips or demolition sites and others were bought from reclaim or as architectural antiques. 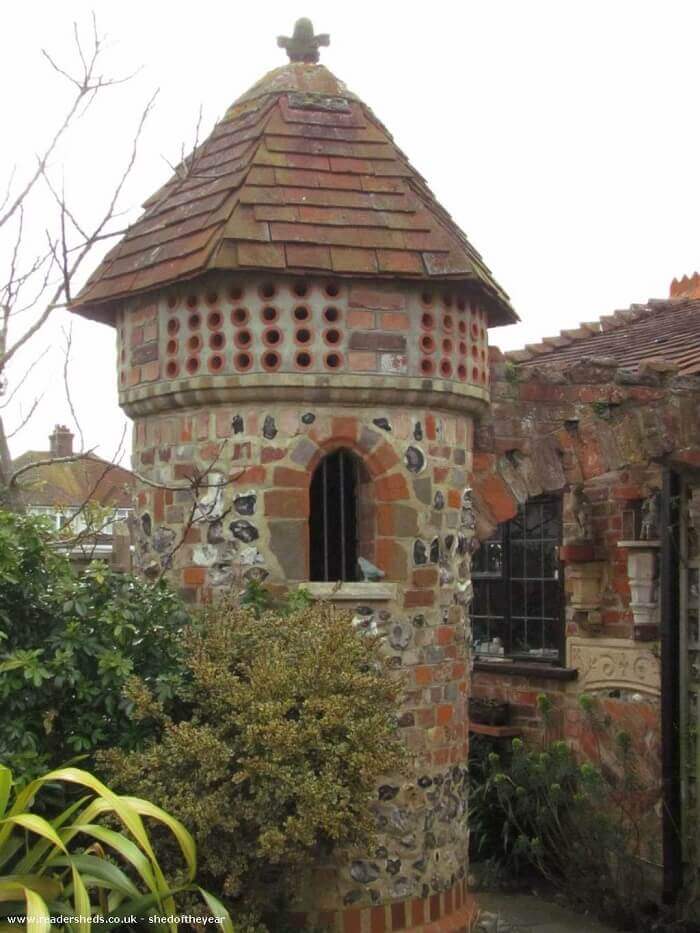 Recycled Brick Shed.
The holes in the tower light up at night with a red glow. 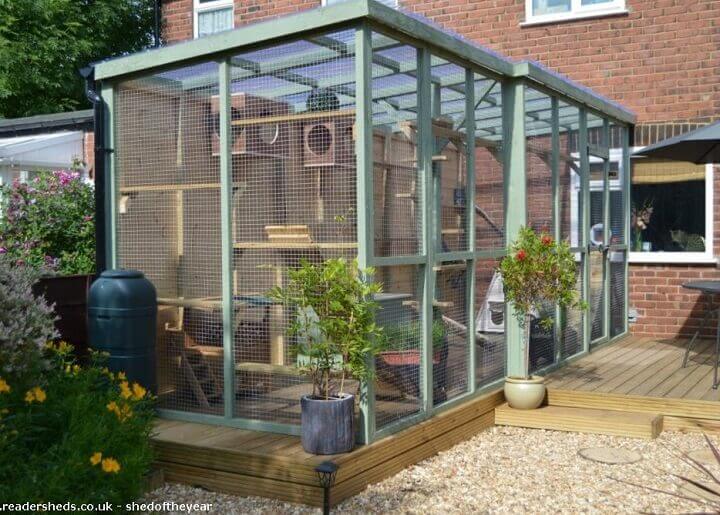 Cat shed by Racheal B.
For cats only! No dead birds or chipmunks in this backyard. Corrugated plexi roof. Access is via a cat door in the kitchen window. readersheds.co.uk</im 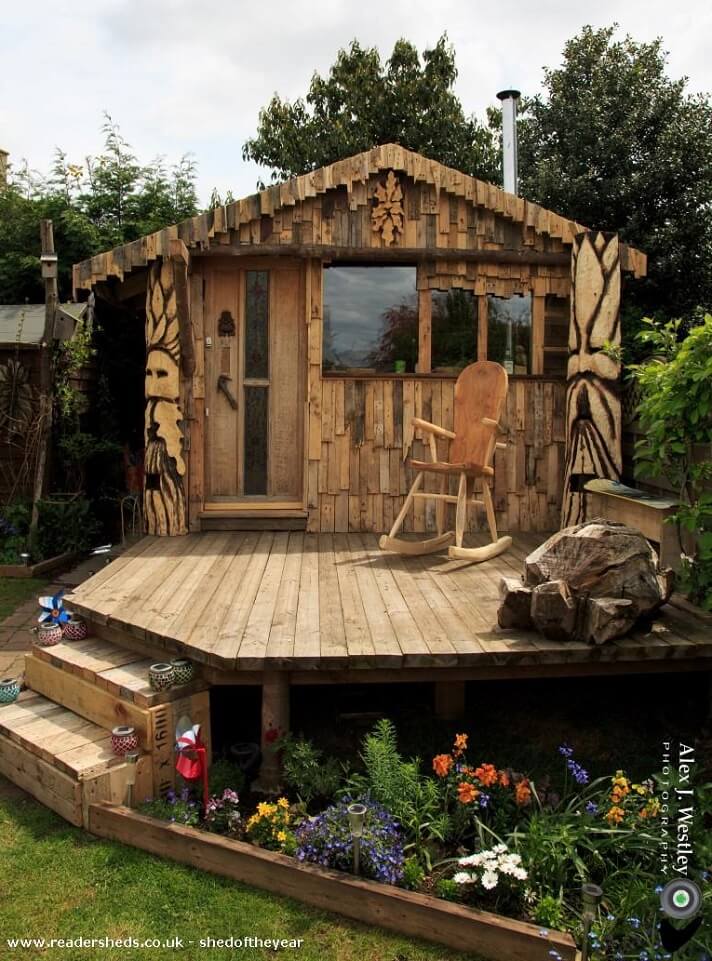 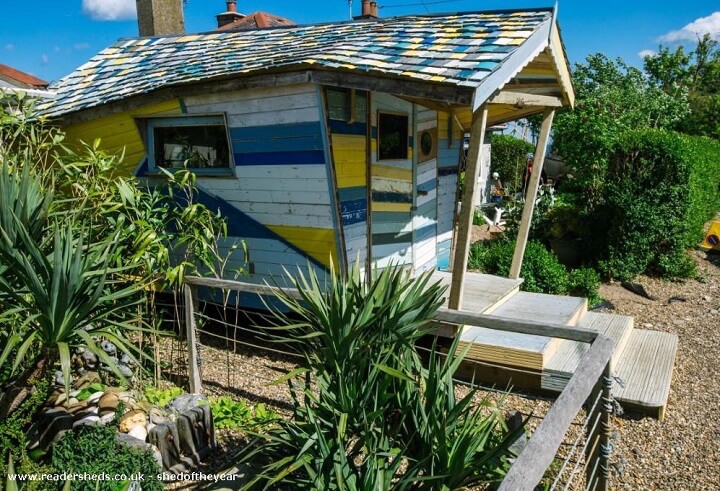