Starting around 18,000 years ago, when the last ice age began receding, sea level has risen by about 400 feet. The National Climate Assessment forecasts a rise of up to 4 feet by 2100. Floating home living may soon be a necessity.

There are two types of floating homes:

Requiring the latter on new construction within floodplains, and considering same for threatened shorelines, is one way to plan for the future. Although floating homes near the coast need protected waters, wave walls and dykes (as used in Europe) are a future possibility. Inaction is costly. Some inspiration for those on the water:

House was built on a steel platform structure with steel pontoons. mos-office.net Photo by Florian Holzherr.

The easiest homemade solution, foam blocks under your home. The 4 guide posts keep the house in place as it rises, just like a floating dock. Dr. Elizabeth English of the Buoyant Foundation explains the necessity of buoyant homes. A steel frame that holds the flotation blocks is attached to the underside of the house. There are four ‘vertical guidance’ poles not far from the corners of the house. The tops of the poles are attached to the steel frame. The poles telescope out of the ground, allowing the house to move up and down. Please visit buoyantfoundation.org for more information.

You never know what’ll pop up here. Sometimes it’s boats that don’t look like floating homes at all, other times a legitimate houseboat will come up. Worth checking back if only to indulge your dreams.

Or do some research in case the perfect home ever floats your way:

Designed by Morphosis Architects and students from UCLA collects its own water, generates its own electricity, and is capable of floating as high as 12 feet on rising flood waters. Flotation is made possibly by a single unit of expanded polystyrene foam coated in glass fiber reinforced concrete.

The panelized walls, windows, interior finishes and kit roof are prefabricated and assembled on-site. The screens slide in front of glass for hurricane winds. Brad Pitt’s Make It Right Foundation, which is dedicated to building affordable and green housing for New Orleans residents displaced by Hurricane Katrina, has built 50 LEED homes in New Orleans Lower 9th Ward so far, with 100 more under construction. He has built them all for under $150,000.

Green roofed SchwimmHausBoat by German architects Confused-Direction — is a permanently floating home. Note that the floatation itself is not very bulky. sascha-akkermann.de

The Dutch have realized that building higher dikes to keep out the sea is no longer the solution. Here’s a community of 37 homes near the Maas River dyke, a river which is known for its seasonal flooding. These homes cost less than 5% more than the cost of conventional construction. Picture above is during a swell. Designed by Factor Architecten

Amphibious homes that rest on land but are built to rise when waters rise. When the river swells the house will float as much as 18 feet. It floats back down as the water subsides. Designed by Factor Architecten

Houses sit on hollow concrete foundations that are attached to six iron piers. The fat posts in between the houses are the guides that keep the homes in place as they glide up and down. Factor Architecten

Ijburg has floating neighbourhoods with docks and jetties instead of roadways. Architectenbureau Marlies Rohmer rohmer.nl

Lightweight 3 story steel homes are supported by concrete “tubs” submerged in the water to a depth of half a story. Bedrooms are on the lowest floor. Architectenbureau Marlies Rohmer rohmer.nl Photo: Roos Aldershoff.

Plus 31 Architects plus31architects.nl. The dock for this community has been made to accommodate cars.

On the Fraser River. There are 500 floating homes in San Francisco, another 500 in Seattle, 500 in Vancouver, 3,500 in Portland, Oregon, 99 on Latsch Island on the Mississippi River in Minnesota and 40 in Yellowknife Bay, NWT. Brett / Flickr.

This small floating community uses a dock as a walk way to each home.

Tomahawk Moorage. This photo was originally found at “portlandfloatinghomeinfo.com/2009/03/24/season-is-here-for-buying-a-floating-home/”.

Instead of raccoons at your back door—ducks. Somewhere In Toronto / Flickr.

Enjoy the sun on the deck of one of these wonderful floating homes.

The floating homes in this remote community tend to be colorful. Photo by Arctic Man Explorer / Flickr.

Everyone on Taggs Island lives on a floating home; there are 40 hugging the perimeter and 20 in the central lagoon, all attached to piles driven into the riverbed. More info: taggs-island.com Pic Grahamsjz / Flickr.

Every year the river homes become locked into the ice in the Latsch Island Boathouse Community on the Mississippi River. The extra weight of thick ice and snow needs to be removed from the roofs and decks of floating homes. The residents of this community also tie their homes to the trees during the spring swell. Pic: Floatin Winona Project fotovisura.com

gh3 Architects designed this boathouse for the photographer’s studio ‘Williams Studio’. The boathouse is located on Stony Lake, Canada. Go to gh3.ca for more designs.

This is another floating house found in Portland. A welcoming atmosphere has been created with the inclusion of a porch.

What an amazing view, this photo is from residencehousedesign.com. You can go to their site for more information.

From the air. Photo by tenaschuck.org.

A small boat launch allows these homeowners to go to land, without having to find a spot to dock their house.

Round windows give this home a truly nautical feel. You can find this photograph at en.wikipedia.org.

By Northwest Architects More pics: designsnw.com. The architecture of this home brings suburban style to the water.

Aluminum panels (polluting to manufacture) and rain screen cladding with fiber cement panels sheath the exterior. Vandeventer and Carlander Architects. To seemore work by these designers, go to vc-arch.com.

The kitchen of above home. Hydronic in-floor heating utilizes an energy efficient heat pump system and the ventilation system utilizes a heat exchanger. Vandeventer + Carlander Architects have more photographs on their site.

The most famous of the Sausalito houseboats, the “Taj Majal”, a miniature version of the Taj Mahal in India. It was a bed and breakfast for a few years, now it’s a private home again. Picture by Lyrinda Snyderman / Flickr.

Sausalito floating homes have a history that stretches over a century. This home made from an old tugboat. A double sense of security. This picture was found at the Tiny House Blog.

This floating house is used in Buntern for tourists, it is commonly called “The Floatel.”

Houseboats in Kashmir. Not homes but rentals for 135. + a night. Go to kashmirhouseboats.com for more information.

Floating cabin on log raft. See a picture of the log flotation raft under construction here. For more on this small floating cabin go to tinyhouseblog.com. More pics here: powellriverbooks.blogspot.com

This is a two-level home. The bedrooms and bathrooms are below sea level. You can see other projects by the architects who created this home at plus31architects.com.

The design recently won a competition, and with funding in place the team expects to begin fabrication soon. Roof-integrated solar panels generate electricity for the two electric engines that propel the home. More of RAFAA Architecture & Designs work can be seen at rafaa.ch. Originally found at “http://www.rafaa.ch/rafaa/last_resort.html”

‘New Water‘ will be the world’s first floating apartment complex, The Citadel. They will use 25% less energy than a conventional building due to the use of water cooling techniques. Architect: WaterStudio, their site is waterstudio.nl.

The world’s largest artificial ‘floating island’ on Seoul’s Han River is a 20,400 square-meter development, housing three inter-connected cultural centers. It was privately funded at a cost of about $88 million. Go to miceseoul.com for more information.

— The connecting bridge is planted with trees, giving the impression of land projecting into the sea. Designed by the Giancarlo Zema Design Group for an Arabian commission. The designs can be found at giancarlozema.com. 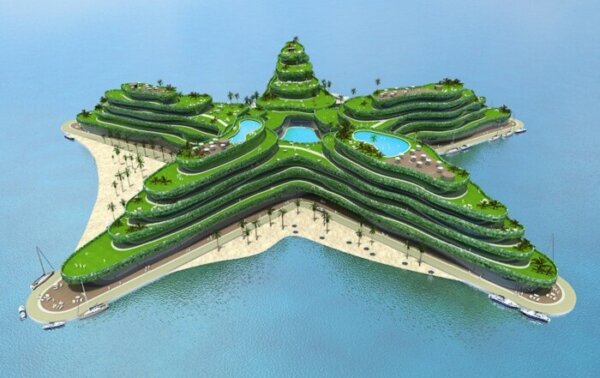 Floating City under construction in the Maldives. The green covered star-shape building symbolizes the Maldivian innovative route to conquer climate change. This will become a location for conventions about climate change, water management and sustainability. Architect Koen Olthuis–Waterstudio.NL. The developer was Dutch Docklands.

Each 50,000-person pad is a designed as a zero-emission floating community that uses solar, wind, tidal and biomass power to generate energy for its inhabitants. Go to vincent.callebaut.org to see more designs by Vincent Callebaut Architectures.

Travels to the venue via a blend of hybrid energies using water, wind and solar power. German design firm, Stadium Concept. More photos can be found on Stadiumconcept’s website.

Equipped with an incinolet toilet which burns waste instead of creating more sewage. Drinking water is collected from rainstorms and filtered into a glass partition wall inside. The inner temperature of the boat is regulated by a geothermal pond loop which runs from the bottom of the water source through a piling supporting the dock and into the floor of the boat. By Wyatt Little — Houston, Texas. For more information go to coroflot.com.

For waste, you must use incinerator toilets, compost toilets or a hook up to sewer services along the dock.

In Lozman v. City of Riviera Beach, Florida, U.S. Supreme Court, No. 11-626, a decision was rendered that floating structures be treated as land-based homes, not as a vessel subject to maritime laws. 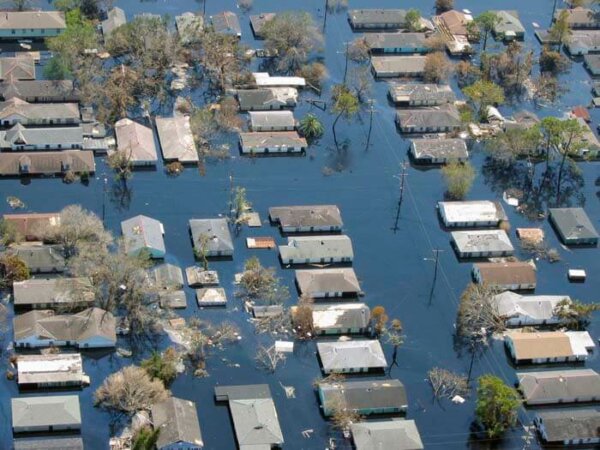 We can now reimagine this scene.

Architects as mentioned above and…