Mycelium is the vegetative part of a fungus. It is a network of cells living within and throughout almost all landmasses on Earth. More than 8 miles of these cells can be found in a cubic inch of soil (Source: Mycelium Running).

Here’s an awesome close-up photo of soil with mycelium growing through it:

Many mycologists call mycelium “the neurological network of nature”. All ecosystems and agriculture around the world are dependent on mycelium to support healthy and resilient vegetation.

To get a better idea of how mycelium is related to the mushroom itself, imagine any other plant, like a tree. The roots of the tree are underground, just like mycelium, reaching far and wide beneath the soil, absorbing nutrients and water. The mushrooms are more like the tree trunk itself in this analogy – although there are typically a large number of mushrooms, not just a single one.

As a Fungi, mycelium isn’t a member of the Plant kingdom. In biological terms, mycelium is actually more similar to the Animal kingdom than the Plant kingdom because it does not produce its own food. Whether it is obtained directly or indirectly, fungi depend on plants for their food (sugars, vitamins and minerals). This is also how types of Mycelium are classified, as we’ll see in a moment.

Mycelium is an essential part of the planet’s ecosystems. Without mycelium, soil structure would break down, leading to further erosion and multitudes of other problems.

The Must-Read Book On Mycelium

If you really want to dive into mycelium and why they’re so important, get Mycelium Running: How Mushrooms Can Help Save The World, by mushroom expert Paul Stamets. He explains the science behind an important conclusion: That growing mushrooms may be the key to saving the environment.

Mycelium is classified into three different categories based upon how they obtain their food from other organisms.

Most cultivated plants grow best in a relationship with mycorrhizal fungi and some even require the symbiotic relationship.

Mycorrhizae is available as a powder, granular, or liquid garden additive and is one of the best ways to ensure a good crop of plants. By almost all accounts, plants grown side by side with and without mycorrhizae perform significantly better. One of the best deals we’ve seen for sale is 2.2 lb of mycorrhizae for $26 on Amazon and $11.60 for 1 lb: 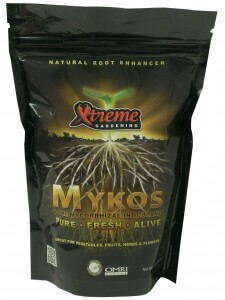 The majority of fungi are saprophytic. Without them the forest floor would become a pile of fallen debris that would keep accumulating over time.

Although parasitic fungi are harmful to their host, they can be indirectly beneficial to other species by creating dead organic matter required for others to survive.

Benefits of Having Mycelium In Your Garden

Promoting the existence of healthy mycelium in your garden has a myriad of benefits. These include:

Cultivating mushrooms in and with your garden serves multiple functions. While the mycelium is amending the soil and enriching the nutrient value of your vegetables, the fruiting bodies are also a delicious and healthy addition to your diet.

How To Grow Mycelium

For those interested in growing their own food and medicine outside of the garden, it takes only a few simple steps to get started.

*For log inoculation always use hard wood such as Alder, Oak or Maple. Never use soft woods such as Pine, Fir or Cedar.

Although these methods are exciting and fruitful, they do not allow the mycelium to do what it does best, which is restoring and benefiting the ecosystem it thrives in.

How To Get Started

When considering energy input to energy output, this method far exceeds any of the others. The stacking functions aspect allows for the energy received to far surpass the small amount of energy needed to be put in.

The mycelium will take hold and in 9-12 months you will have a fully-producing mycelium bed that will continue to produce for several years.

For high fruit production and ecosystem restoration the Garden Giant is a good mushroom to start with.

The Garden Giant feeds off a wide variety of organic matter, meaning you can grow it on more than just woodchips, and has many beneficial relationships with bacteria naturally in the soil.

The mushrooms are edible and can grow incredibly large! It is best to harvest them before they get too big, and before maggots or other insects get there first.

As an organism, mycelium is still quite mysterious. Mycologists have only identified 14% of mycelium species, leaving us with a whole lot more to learn!

The Best Mycelium Books And Resources

Have you had success with mycelium in your garden?

Share your tips with us in the comments below!