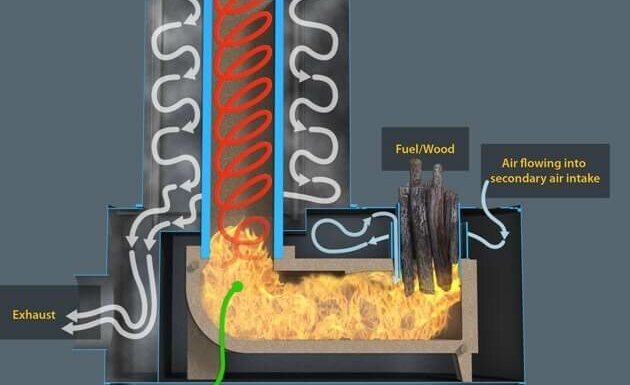 You are here: Home / Building / Stoves, Ovens, & Heaters / Rocket Mass Heaters: What Are they, How They Work, And Photos

Let’s say you want to build a cozy reading nook in your house, or maybe a room-warming heater for your tiny house. What if you want it to be heated with off-grid heat?

You may think that all those desires couldn’t possibly all align in a single project, but they do! The Rocket Mass Heater can fulfill all these design elements, and more.

What is a Rocket Mass Heater?

A rocket mass heater is a wood-fired device that uses short and intense fires to primarily heat a massive bench usually made out of cob. This massive bench in turn will give off radiant heat to the rest of the room over a long length of time. All rocket mass heaters include a heat riser which is surrounded by a “bell” which is often a 55-gallon metal barrel (but can also be made out of other materials like copper if a more decorative look is desired). Generally, they are used to heat a single room in a normal-sized house or an entire cabin or tiny home.

What is the Basic Design of a Rocket Mass Heater?

The key to the workings of a rocket mass heater are in its design. All rocket mass heaters have two main parts: the combustion unit and the heat exchanger. The combustion unit is where the wood is burned at a very high temperature. The heat exchanger, often in the form of a cob bench, is the part of the unit that extracts as much heat as possible before the hot gases leave the unit through the chimney.

The combustion unit is composed of several parts. The first part is a vertically-oriented hole where the fuel wood is placed and the fire is lit. This leads to a short horizontal tunnel where the fire actively burns. From there a sharp 90º turn upwards leads into the heat riser. The heat riser is enclosed within the metal barrel which is often referred to as the bell. The extremely hot gases rising in the heat riser hit the underside of the barrel, turn down, and then travel along the sides of the barrel to the manifold where the hot gases will enter the heat exchange unit.

The heat exchange unit is also made up of a few parts. The first is a lengthy channel with multiple turns in it. Most people use uninsulated stove pipe for this as it is cheap and easy to find at most big box hardware stores. The other main component of the heat exchange unit is the material that will absorb all of this heat. This is referred to as the thermal mass. Dirt, cob, and masonry are the favored materials for this as they are dense and can hold a lot of heat energy. The fore-mentioned channel runs through this thermal mass and heats it up.

How does a Rocket Mass Heater Work?

As mentioned, the design described above is key to the correct functioning of a rocket mass heater. In the next section I will go over how to design those parts correctly, but first I want to talk about the principles that actually allow these heaters to work so well.

The first principle is to use VERY HOT and QUICK fires. In a rocket mass heater, the fire will get MUCH hotter than that found in your average metal wood stove. You must keep the fire between 1000 and 2200ºF as opposed to a wood stove’s fire of several hundred degrees. This serves two functions. First, it ensures that the wood is completely burned. With lower temperatures, wood is not burned completely, and much of this is given off as volatile gases which also means wasted energy. Secondly, these hot fires help heat up the body of the rocket mass heater as quickly as possible.

The second principle is utilizing a large amount of THERMAL MASS in the design. Thermal mass is basically a battery for heat energy. Materials with a low amount of thermal mass – things like fiberglass insulation, cotton balls, and pumice stone – are unable to hold very much heat. Materials with a large amount of thermal mass – stone, tile, adobe, and water, for example – are able to hold large amounts of heat energy. This is why these rocket mass heaters are built out of these sorts of materials. These massive materials are packed around the channel made of black chimney pipe that carries the hot gases from the combustion unit. The heat from the hot gas is transferred from the channel into the body of the heat exchanger which causes the temperature of the mass to rise.

More Detailed Specifics about the Design of a Rocket Mass Heater

In order to withstand the extremely hot fires that occur within the firebox, the firebox must be made of specific materials. If you try to use normal bricks found at your average big box hardware store, they are liable to explode. You will need bricks specifically made to hold up to these temperatures. These special bricks are called firebricks. They cost significantly more than your average brick, but are a necessary expense for this project. The entire firebox and heat riser should be constructed of this sort of brick.

The next important design detail is the shape and proportionality of the firebox which includes the heat riser. When viewed from the side, the firebox should have a J shape to it. The first vertical channel is where you feed the fire. The length of this part needs to be significantly shorter than the heat riser, otherwise you will have draft issues. A proper ratio for feed channel and heat riser is something along the lines of 1:3. The burn tunnel that connects them will be of a length intermediate to those two, but will also be influenced by where exactly the barrel will be placed.

The length of the channel within the heat exchanger is also an important design consideration. Too short and you won’t be able to extract all of the usable heat from the gases, too long and you won’t get enough draft to keep a fire going. Generally, the channel is shaped like a long U under a straight bench. However, if you want an L-shaped bench to take advantage of your particular space, that is also possible. Somewhere around 30 feet is a good total length for the channel. However, this will also be dictated by how big your room is.

You will also want to pay attention to the material that makes up the body of the heat exchanger. Not just any material will do. You want something that has a lot of thermal mass, and you want something that is not combustible. Thankfully, these two characteristics often go hand-in-hand. Most of the commonly used materials are also cheap (or free). Generally, a cob mixture is placed directly around the black stove pipe that forms the channel that runs through the heat exchanger. Cob compacts well and forms to pretty much any shape, so it will completely fill in around the pipes. This cob layer can eventually be covered with a clay plaster or other materials like tile, brick, or stone. The decision of the outer covering depends on how much money you want to spend and what you find aesthetically pleasing.

There are some materials that might seem like a good idea at first, but actually make a poor choice for the heat exchanger. You would not want to use something like rounded river stone. Even though it is dense and has much thermal mass, the rounded shape prevents the stones from compacting completely. This hinders heat transfer as the air spaces make a great insulator (which you don’t want). Pumice stone is also a poor material as it is so airy.

So there you have it – a brief primer on rocket mass heaters. Indeed, this is merely scratching the surface of these efficient heating devices. If you are interested in actually constructing one for yourself, which should be within the ability of a slightly above-average DIYer, I would suggest getting a detailed book (several are listed in the resources below) on the construction of these heaters.

While they’re not for everyone or every home, they certainly should be considered if your dwelling is the sort that could be serviced by one.

Rocket mass heater. Leaving the drum exposed allows immediate heat to enter the room. Covering the barrel with a natural surface of cob slows down the instant heat and holds heat for slower release. Found at permaculturedesign.fr.

Rocket Mass Heater in a straw bale home in France by Bec Touvière. Courses given once a year in France. Great video of the process at bottom of page here: permaculturedesign.fr

Rocket mass heater, built during a Bioconstruyendo held in February, 2010 in Patagonia, Argentina, in a straw bale and adobe cabin. Visit www.firespeaking.com for this picture.

Rocket Mass Heater by Juured in Estonia. Their site has more information. Originally found at “juured.ee/”

Rocket mass heater and cooktop in Brussels. This photograph is from flickriver.com.

Rocket mass heater by Ernie and Erica Wisner. This heater was built for a cabin. More information can be found at ernieanderica.blogspot.com.

9) Stove In The Shamen Center

Rocket Mass Heater by Juured in Estonia. For more stories and pictures of cob, go to Juured’s website. Originally found at “juured.ee/”

You can see how they used cob to seal the barrel.

12) Heater At A Cottage Home

Rocket mass heater in Cob Cottage, Coquille, Oregon, the home of the creator of the Rocket Mass Heater, Ianto Evans.

Rocket mass heater mostly used for cooking as it is in the highlands of Guatemala. Find more on this story at joachim2010.blogspot.com. (Note: site is in French)

Mass Heater by terre-et-flammes.fr. This is only one example they have on their website.

An antique stove was surrounded in cob. The wood loads on the right side, there is a heated bench behind. By Ernie and Erica Wisner

16) Heater Without A Barrel

Rocket mass heater with a cooktop. The heat riser does not have to be a barrel, but, as you can see here, can be built from masonry. This photo was originally found at “marquedeposee.over-blog.com/article-p1220438-jpg-103910105.html”.

Rocket stove heaters are great for lounging on during cold winter months. If placed in a corner, you can create your own heated reading nook!

How To Build A Rocket Mass Heater