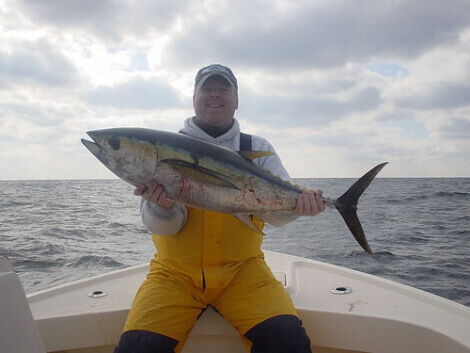 You are here: Home / Living / Tuna Truths: The Pros and Cons of Canned Tuna 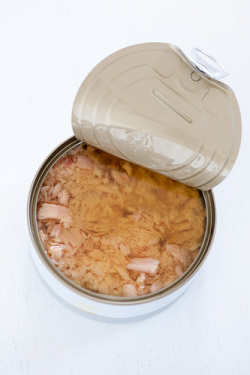 Growing up in South Dakota, I thought there were two kinds of fish. Trout and tuna. Trout were flappy and fun to catch, with beautiful rainbow-colored skin that my mom always complained about removing. They were in bountiful supply in the lake by my uncle’s mountain cabin. Conversely, tuna were small and round, with steel skin that could only be removed with the aid of a can-opener. My mom never complained about that. They were also bountiful and didn’t require a trip to the Black Hills. All we needed to do was visit the local Safeway.

Sadly, my myopic assessment of the world’s fisheries was pure fantasy. My uncle’s lake was stocked annually and that tuna didn’t just jump on my grocer’s shelf on its own. It got there leaving a bloody trail of bycatch and brought with it a lovely little heavy metal called mercury that can potentially cause issues with brain and nervous system development. Had tuna fishing continued the way it was going in the undisclosed decade I grew up in, we’d all still ignorantly be snarfing down canned dolphin, turtle, bird, and shark- killing mystery tuna. Fortunately, this doesn’t need to happen. With a little effort, anyone can ethically enjoy this easy-to-eat, pre-packaged seafood.

A big change happened a few years ago when it came to light that tuna fishers were killing dolphins. No one minds eating Charlie the Tuna, but Flipper the Dolphin is sacred, so the industry went to great length to make its products “dolphin safe.” Unfortunately, this did nothing for Bruce the Shark, Yertle the Turtle, or Herb the Sea Bird, all of whom continue to be slaughtered by practices known as longline fishing, where one central line drags several other baited lines, indiscriminately catching everything in its path; or purse seining, which uses a big net to catch, well, everything that gets in the way. You’re much better off seeking out fish that’s been caught using trolling or pole-and-line methods.

As for which species to pick, tuna reproduces young and grows fast, meaning that they would be absolute nightmares were they teenage daughters, but as a food source, they’re relatively sustainable. Canned tuna can be one of several different species. “White tuna” means albacore. “Light tuna” means skipjack, tongol, yellowfin (ahi), or bigeye. Pacific Ocean Albacore stocks are particularly strong and Skipjack is plentiful internationally, so you’re doing the right thing eating those. If you’d like a more comprehensive list of tuna fisheries, have a look at this fact sheet from the Monterey Bay Aquarium Seafood Watch program.

Once you know what information to look for, the next hurdle is finding out where to find said information. Ideally, the fish’s origin and the practices used to catch it would be printed on the can, but that would make the company selling the tuna accountable – and what business wants to be accountable for its actions? Canned tuna is exempt from Country of Origin Labeling laws, so good luck trying to find out any information from Starkist, Chicken of the Sea, or Bumblebee. You can research their websites if you like, or Healthytuna.com, the website of the Tuna Council, which was formed by the big three to disseminate health and environmental facts about tuna in a vague, whitewashy way. You won’t find much substantive information.

Instead, sidestep the big companies and support companies more forthcoming with information on their fishing practices. American Tuna, Henry & Lisa’s, and Oregon’s Choice are all excellent choices. They’re a little more expensive and somewhat harder to track down though. You might even need to order from their websites. But you buy your books and DVDs online, why not your tuna?

Finally, now that we’ve addressed the environmental concerns, lets take a moment to address the mercury issue. I know I threw a bunch of scary doom and gloom into the lead of this post, but things aren’t that bad. (I’m a journalist; I’m trained to do that.) The truth is, you need to be mindful of mercury, but it’s a relatively easy thing to work around.

Albacore tends to have more mercury than the others, but before you chuck out all your white tuna, keep in mind that it also has a higher amount of omega-3 fatty acids, healthy unsaturated fats vital for growth, development, and brain function. If you’re a young child, you’re nursing, you’re pregnant, or soon-to-be pregnant, it’s best to stick with light tuna and even then, limit the amount you eat. The FDA has you at 12 ounces a week. The Environment Defense Fund suggests 12 ounces a month. Personally, I’d play it safe. (Editor’s note: The Environmental Working Group’s Tuna Calculator can help you determine how much tuna is safe for you.)

But for the rest of us, the omega-3/mercury trade-off is worth it, so go for the albacore. I’d still hedge my bets a little and limit seafood to 4 servings a week or so. Frankly, you don’t need much more. The human body needs about .8g of protein daily per kilogram of body weight. So eat a little responsibly-sourced tuna each week. Add in an egg or two, and a diet full of fresh fruits, veggies, and whole grains. You’ll be doing yourself, Bruce, Yertle, and Herb a big favor.