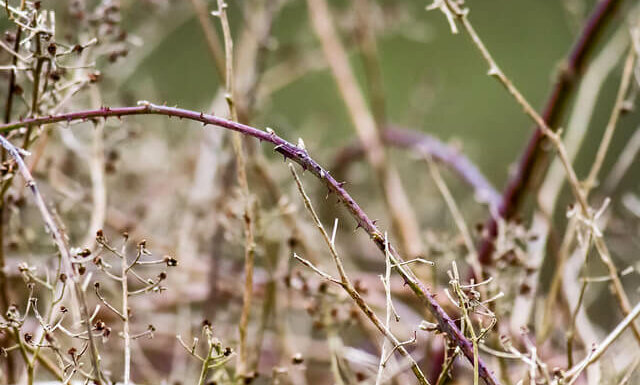 You are here: Home / Gardening / How To Remove Bramble Bushes

What is a bramble? For me it’s that spiky annoyance that scratches your arms and grabs your pant legs unexpectedly when you’re trying to take a walk or weed your garden. It’s prickly, invasive, and quickly takes root anywhere, making it impossible to eradicate.

Did I say impossible? Well almost. It’s certainly a battle I am not willing to lose.

I slowly ventured into the wooded section of our one-acre property and let out a loud groan. We had moved into the house during the spring, and the resulting summer had been a total bust for gardening. We were focused on settling into the new home and enduring the lengthy drought that hit our area. However, I wanted something more for my yard. In response, when the temperatures started to drop and the bugs decided to leave (a big issue for someone living near woods and swamps), it was time to take action. I needed to prepare my land for the following spring.

The previous owners had obviously done little to nothing with the wooded areas of the property. In addition, there were a few small gardens in the cleared area and the woods had become their literal dumping ground. Everything that couldn’t be discarded in the usual fashion was just left in the woods. Out of sight, out of mind, so to speak.

When I walked gingerly through the woods, my pant legs were caught in tall, spiky branches. You guessed it! Brambles and wild raspberry shrubs had invaded every ground space between the trees.  Needless to say, brambles are very invasive.

However, I shouldn’t neglect to mention that the trees were marvelous. We had sugar maple, white birch, spruce, white pine, and more. You name it, we had it. I loved them all.

After realizing the brambles presence, all I could do was start digging and reclaiming the land. I made sure I always dressed in long pants, tall boots, a long sleeved shirt or pullover, and gloves.

For this specific chore, I chose thick leather gloves that would (hopefully) protect my hands from intruding bramble spikes.

Regardless, I always ended up with scratch marks on my arms and legs, a clear testament to my daily activity.

I hauled out my attack weapons; my long-handled lopper, mattock, garden shovel (the one with a sharp point), and pruning shears. Each tool had its purpose.

My attack began with the lopper. Its long handle was perfect for clipping close to the root without having to bend over and expose my face to the spikes. I wanted the tall stems out of the way before digging. The lopper also assisted later in the process when troublesome roots had to be cut with something sharp.

The mattock is always handy. Its versatility makes it an essential tool, or weapon in my case. I used the mattock to dig around the bramble, loosening the soil and attacking the roots with a vengeance. Its stout head with a combination of an axe blade and a pick made it the perfect tool to assist in the bramble eviction process. Though certainly not an easy job, this tool is a major factor in making extraction a possibility.

My trusty shovel had served me well over the years; digging up dead or unwanted hedges, transplanting rose bushes, and other general purpose gardening. The shovel is one of my favorite tools. Whilst digging as much of the bramble roots up as possible, a sharp jab with the pointed end would sever some of the sneaking root extensions.

Finally, I used the pruning shears. Necessary in just about any gardening situation, the shears were used to clip the bramble stems into manageable lengths for disposal.

It seemed like an endless task as I worked around the quarter-acre woodlot in our yard. I dug and pulled up bramble after bramble, adding it to my growing garden waste pile. Within the garden waste pile, I kept the stuff that I couldn’t and wouldn’t recycle. The brambles were better burned. Total elimination.

At least, that was the plan.

What had I gained? Fewer brambles (or so I assumed), more back pain, and a wonderful way to eradicate life’s frustrations. Unfortunately, just as soon as I thought I was making progress, I would turn around and discover yet another bramble that I had missed.

I labored long and hard. Winter came late, so I was actually digging brambles at the beginning of December. Working outside that late was quite a feat for someone living in the northern, snowy regions of North America. Even as the snow was starting to fall, I was fighting the bramble invasion. I fought the brambles until they were fully covered in snow, retreating inside for the winter.

Spring came early that first year in the house. Luckily, I was able to do most of the yard clean up before the bug season started. When I tidied the yard from fallen branches and annoying weeds that somehow managed to pop up before anything else had a chance to grow, I felt that all-too-familiar tug on my pant legs. They had returned!

With a groan, I started all over again. My battle with the brambles, it seemed, would be never ending. Even though I have to deal with the bramble invasion a couple of times every growing season, the rewards outweigh the back pain. I now have a fascinating array of wildflowers throughout my wooded area, and lots of new tree seedlings stretching up towards the light.

Luckily, the bramble invasion has reached the point where it’s more maintenance than eradication, and if those brambles think they will ever get the upper hand on me, they had better think again. I’m up for the challenge.

This post is brought to you by award-winning author and artist, Emily-Jane Hills Orford When she isn’t writing, creating collage paintings, working on her needlework, or composing, you’ll find her in the garden. Even in the winter, gardening is not far from her thoughts as she plans and prepares for the next season and the next growing adventure. Using pressed flowers from her garden, this author/artist/composer is gardening indoors with multi-faceted garden ideas re-created on canvas.