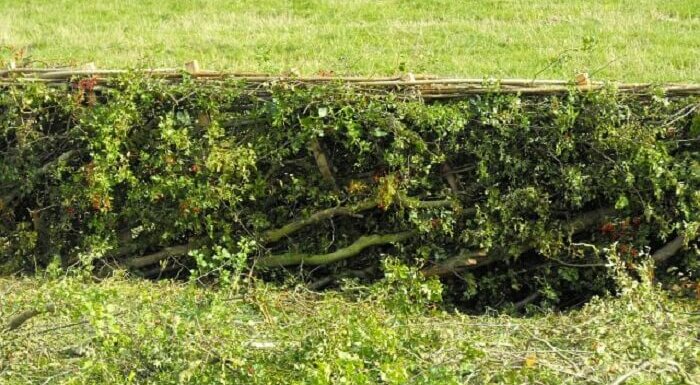 Over two thousand years older than chain link. A living hedge not only keeps livestock fenced but also prevents soil erosion and water runoff. Living hedges are good wind blocks and snow collectors as well as habitat to birds, insects and small mammals. And they sequester carbon, rather than produce it, such as during the manufacture of chain link or plastic. A hedge with summer foliage. Photo by Penny Mayes. www.geograph.org.uk Inspecting a hedge. A laid hedge trimmed too square and perfect may look nice but limits biodiversity, although periodic tidying is necessary. Trimming yearly eliminates flowers and berries and insects and birds. You can get some idea of the height of the hedge before work began from the taller hawthorns on the left. Photo by: Penny Mayes. www.geograph.org.uk

The stem of the tree or bush is partially cut at its base at an angle. The art is in knowing how much to cut through the stem while keeping life in the remaining connected piece but allowing the flexibility needed to bend the trunk 35 to 60 degrees without breaking. These remaining stems or trunks are now known as pleachers. The angled trunk stump is cut off straight to prevent disease and promote new vertical growth. Image: www.gerbeaud.com

How To Lay A Hedge Hedge laying is always performed during the late fall or during winter months while “the sap is down”. The pleached trunk may not be brought down perfectly horizontal as sap only flows upward. Image: a hedgelaying competition in Penyffordd. penyffordd-district.blogspot.com The trees must be at least 8 feet tall before a hedge can be laid and ideally about nine inches apart. The first step is to trim the underbrush so that the pleached stems will receive air and light, and new growth crops up from the cut trunks. After pleaching, additional stakes are driven into the hedge for added support. Drawing: www.hedges.educagri.fr Intertwining the branches through the vertical posts and tree trunks ensures a cow- and sheep-proof barrier. In the olden days in Europe, every landowner knew how to lay a hedge. Image: www.maisonbotanique.com In the UK and Ireland, hawthorn, blackthorn and hazel are popular trees for hedge laying. Diversity of species within the hedge is best for ensuring longevity and attracting biodiversity. In 1946 there were an estimated 500,000 miles of hedge in England. Since then, there has been a rapid loss of hedgerow, mainly due to changes in agricultural practices. Of late, the art of hedge laying is being revived as the benefits and beauty of the hedgerows are again finding favor. Hedgerow surrounds a road at Duchy Home Farm. The Prince of Wales laid part of this hedge. This stand of trees was ten years old. Ancient laid hedges were created from the trees and shrubs that remained at the edges of a cleared field; more recently the trees and shrubs are planted intentionally. Image: www.duchyoriginals.com With summer foliage in Staffordshire. There are numerous different styles of laid hedge. See resources below. The style shown here lays the branches into the field or toward the livestock. Image: www.shropshirehedgelaying.co.uk Many styles add a top binding (sometimes called hethers) which consists of weaving a bunch of long (3-4 meters), thin, pliable branches along the top of the stakes to keep the hedge connected and strong. Willow and hazel are good candidates for binders. Both stakes and binders will rot over time, but the hedge will be dense enough to support itself by then. ImageL www.maison-deco.com The bindings and posts add stability until the fence grows in. Image: gallery.nen.gov.uk Before the hedge laying, a Friday morning in March. forum.downsizer.net The same hedge in late summer of the same year. forum.downsizer.net What you would eventually get if you never relaid your hedge. Photo by Robin Stott. www.geograph.org.uk Derbyshire style with stakes only, no top bindings. www.peaktraditionalfencing.co.uk This hedge was laid in the winter, and this is its first spring growth. www.peaktraditionalfencing.co.uk New growth from ground level rejuvenates the hedge. A relaying of the hedge should take place every 20-50 years. This hedge is Derbyshire style. Photo by David Stowell. www.geograph.org.uk A wide ancient hedge. “In southern England alone, perhaps as many as one-fifth of all surviving hedgerows date from Saxon times, a living link with the Dark Ages. Some even date back to Roman times.” Photo by Sam Abell.  photography.nationalgeographic.com An overgrown hedgerow interspersed with trees in Ireland. Image by Michael Fairchild. www.michaelfairchild.com With periodic trimming to encourage regrowth and relaying every 15 to 50 years, a hedge can last indefinitely. This ancient hedgerow called Judith’s Hedge is in Monks Wood. Judith was the niece of William the Conqueror and owned Monks Wood (then known as Ewingswode) in 1086. The hedge itself is thought to be over 900 years old. Photo by Chris Gardiner. www.geolocation.ws

Caesar described the process of hedgelaying in 57 BC in his Gallic War after encountering laid hedges at Nervii in Flanders.* The leather gauntlets which were worn to lay hedge were called “dannocks”.

Trees & Shrubs That Are Good For Hedging

Hedges and Hedgelaying: A Guide to Planting, Management and Conservation by Murray Maclean

Read about the different styles of hedges: www.hedgelayer.freeserve.co.uk

“The shrinkage in the flora is due to a combination of clean-farming, woodlot grazing, and good roads. Each of these necessary changes of course requires a larger reduction in the acreage available for wild plants, but none of them requires, or benefits by, the erasure of species from whole farms, townships, or counties. There are idle spots on every farm, and every highway is bordered by an idle strip as long as it is; keep cow, plow, and mower out of these idle spots, and the full native flora, plus dozens of interesting stowaways from foreign parts, could be part of the normal environment of every citizen.”
Aldo Leopold, A Sand County Almanac