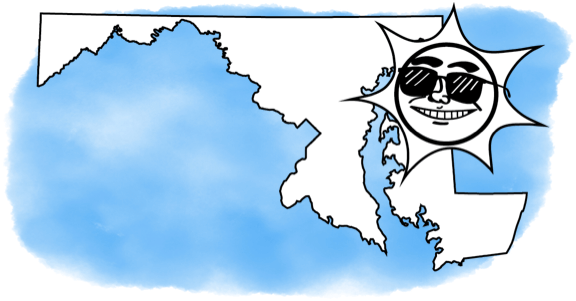 Going solar? Good call. It’s the right choice for your pocketbook and for the climate. If everyone in Maryland used solar power, it would take 45 billion pounds of carbon out of the atmosphere every year—according to the EPA’s greenhouse gas calculator, that’s the equivalent of planting a forest that would cover an area more than twice the size of the state.

Solar power is a growing part of the energy mix in Maryland. Nationally, the state ranks #14 in solar energy use.

The biggest advantage of solar energy? The cost—$0. For the average Maryland household, generating all their own electricity with solar would save $1,676/year. Also, you’re doing a favor for the next generation. Instead of relying on CO2-spewing coal plants, which produce most of Maryland’s electricity, you’ll be producing your own clean, renewable energy. In Maryland, residential customers like you account for 31.5% of the state’s total energy consumption.

The disadvantages: The cost of installation. The average solar installation costs around $20,000. Incentives like Maryland’s Residential Clean Energy Grant Program, which offers incentives of up to $1,000 to residents who install solar panels, and the U.S. Residential Renewable Energy Tax Credit can bring the overall cost down.

The average Maryland family uses 34,167 watts of energy on an average day. And, on average, they’ll get 4 hours of sweet Maryland sun each day. So, to get enough energy to keep the power running all night, they’ll need their solar power array to generate 8,542 watts of energy per hour while the sun’s out.

To figure out exactly what you’d need based on where you live in Maryland—and how much money you’d save—use this solar savings calculator:

Maryland has an ambitious renewables and solar policy and ranks highly in pending and installed solar capacity. The state has substantive pro-solar policy incentives. Like most of the Northeast, it has very high energy costs and consumption, making solar a cost-effective part of its energy portfolio.

Maryland has a substantial renewable energy portfolio standard (RPS): its goal is to reach 20% renewables by 2020, though Maryland’s governor recently vetoed expanding the standard. Solar is required to be at least 2% of that mix. Maryland set a goal of a 15% reduction in energy usage by 2015 as part of the EmPOWER Act, with 2% reductions annually thereafter. Maryland’s state government is required to draw at least 6% of its energy from renewables. State agencies can borrow from the general fund for solar.

All government buildings at all levels are subject to substantial energy-use reduction standards, which can be fulfilled by generating energy from solar. Local governments can create a property tax credit for low energy buildings and offer PACE loans. Local governments are also incentivized to earn grants as part of the Maryland Smart Energy Communities program. Maryland is working towards adopting community solar.

Like most states, Maryland mandates that its utilities practice net metering. Net metering means that any homeowner or building owner who generates solar power gets credited for that power on their electric bill. Any power they use is deducted from their bill and they get paid for power they don’t use and send to the grid. Net metering in Maryland is capped at 1,500 total MW (roughly 15% of 2014 peak demand.) Generators who benefit from net metering are also recipients of Solar Renewable Energy Certificates (SREC); utilities need to purchase and retire SRECs from their holders in order to retire the utilities’ renewable requirements under the RPS—a substantial financial incentive for small generators. Utilities must disclose their fuel mix and emissions to customers.

Baltimore County announced in 2016 that will install 21 MW of solar capacity on its property.

In June 2017, it was announced that Ocean City will receive 20% of their energy needs from a solar project constructed by Route 50.

In July 2017, officials announced the completion of a 500 kW solar project. The solar array is located in Hampstead near Upperco Road, and will save approximately $50,000 for the city annually.

The Maryland-DC-Virginia (MDVSEIA) branch of the Solar Energy Industry Association (SEIA) advocates for solar businesses and pro-solar policy in all three areas.

The Maryland Sierra Club advocates for pro-solar policy including the recent proposed expansion of Maryland’s RPS.