You are here: Home / General / Compassion in Action: How to Save a Fly 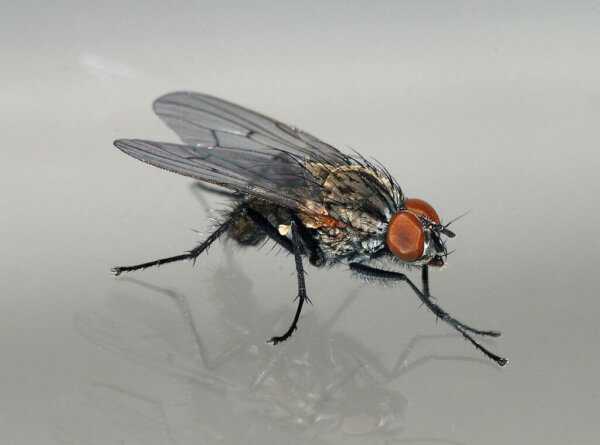 If you do not think me a bit nutty already, then be warned: the following may have you calling the men in white coats.

Nevertheless, intrepid lover of living creatures little and big that I am, I risk perpetual solitary confinement in a padded room or, even worse, the reputation of an idealist and extremist and romantic by offering to my fellow humans the following advice on how to be compassionate even to those things we normally disdain. That is, I offer this tip on how you can save the life of that dreaded interloper and symbol of all that is icky: the fly.

Yes, I said that right. Forget the Karate Kid and the lightning-quick chopsticks! Use a slow hand instead.

Apparently, flies can only see things moving if they move quickly. By moving like a slug rather than at mock speed, you can “sneak up” on the fly, which is essentially blind to your movement as you approach. I have found it most effective, and safest, to catch them by the wings rather than the body. But however you do it, do it slowly. And once you catch said fly, you can then kindly and happily take it outside–practicing the insect version of “catch and release.”

Some would-be fly savers have offered other methods, all of them involving quick motion; here is one example from WikiHow.com. But the advantage of taking the “slow-hand” approach (besides being a tribute to the great Eric Clapton) is that you pose less danger to the fly from a too-quick motion and an inadvertent (?) squishing.

And the flies seem to recognize your kindness, at least as far as I can tell. They often sort of relax and ride along as you carry them; sometimes they even walk around on your hand if you do not quite catch them.

Now, if you are to utilize this method of catching and saving a fly, you must first overcome your by-now natural/instinctual reaction to sentence any and all of these buzzing “pests” to a de facto death. You must resist grabbing the flyswatter just in case my discussion of them alone is enough to evoke them from the ether, to call them up out of that infernal cesspool they surely mutate out of. You must avoid plugging in the bug zapper so that you can gloat with glee as they fly into the light and get fried to a crisp.

No, my fellow humans, killing flies as fast as we can swing the swatter is not sustainable or humane…even if our efforts seem to do nothing to reduce the numbers of flies buzzing just about anywhere and everywhere we happen to be.

So the next time you see a fly crawling around your window or hear one buzzing around in your kitchen, try to have a big heart…and a slow hand!