You are here: Home / Homestead Living / Off Grid / Cape Coral, Florida: Go Off the Grid, Go to Jail

Robin Speronis lives in a modest home in Cape Coral, Florida- and she’s living in a way that many environmentalists and preppers would call ideal: 100% completely removed from the city’s electrical grid. Despite having no access to Cape Coral’s electrical grid and no city water running to her home, Speronis is happy. The city of Cape Coral, however, is not.

As word of Speronis’ off-grid existence spread city officials took notice. Eventually, a Cape Coral police officer came onto Speronis’ property, inspected the her rain catch barrels, and stuck a placard on the door declaring the property unfit for human habitation. “Any person entering this property without official authorization,” it read, “is subject to removal and/or arrest.”

Fox News has continued to run segments on her, repeatedly accusing the city of Cape Coral, Florida of retaliating against Speronis after seeing its initial news report. Since then, city representatives offered a series of unconvincing denials, first saying they believed the home was vacant, then citing an open compliance violation and an anonymous “citizen complaint” against the home. The city’s records, however, show that the “citizen complaint” had, indeed, come from a city employee who had seen coverage of Speronis’ home and alerted his colleagues.

Throughout the process, the city has won few friends for its pains to “protect the integrity of the system”. Those are the words of Cape Coral city officials, not the snarky ramblings of some clown with a zombie blog. “The city has the health, welfare, and safety of all its citizens to consider,” city council member, Rana Erbrick, told Fox. “But there also comes a point where you gotta do what you gotta do to protect the integrity of the system.”

To be clear, this is the sort of sustainability-fueled menace that Rana Erbrick is working to “protect the system” from … 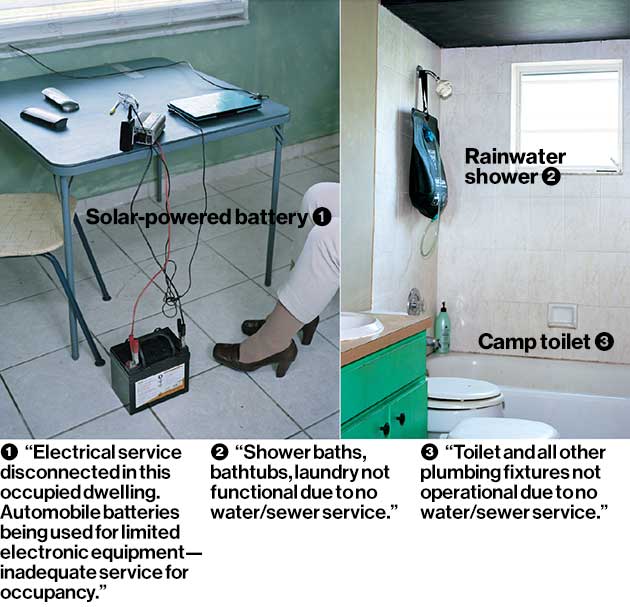 … and, “Thank God for Rana Erbrick!” is all I can think to say, when I read about the unmitigated horror that is – gasp! – a rainwater shower that drains into the sewer system beneath Speronis’ home. (In case you can’t tell, that’s sarcasm, and I believe that Erbrick is, in actuality, a terrible person.)

To her credit, Speronis isn’t having any of it. She found an attorney – local hero Todd Allen, who one famously tried to foreclose on a Bank of America branch – who would take up her case, pro bono, and didn’t give an inch during interviews. “Cape Coral needs to be afraid of me,” she said, not actually wearing a Guy Fawkes mask but sounding as if she were. “I’m not afraid of them.”

The city council of Cape Coral, Florida, though, seems to have something out for Speronis, and started to play dirty. A few months ago, when Speronis confirmed that she was flushing waste into the sewer with rainwater without paying to use the system, and the city moved against her. City officials then dug up the front yard and capped her access to the sewer, following up the physical action by filing a complaint against Speronis with the Florida Department of Health, alleging that she was “creating a health hazard by spreading her waste on the lawn”. The charge was unfounded (Speronis used a camp toilet and “properly” disposed of her waste), and the State said that the city had committed its own violation and created a “sanitary nuisance” by capping the line.

Next, the city went after Speronis’ two dogs, which she calls her “children”. Cape Coral’s animal control has tried on eight occasions (at the time of this writing) to take her pets, but Speronis has been able to hide the dogs them with her neighbors. By and large, a group that tends to view her as a benign eccentric. “She ought to be able to do what she wants to do,” says Speronis’ neighbor, Robert Goodridge, who believes – as many do – that the city is unfairly targeting Speronis.

As much as it would suit this site to paint Speronis as something of a hero (which, she kind of is), it’s worth noting that she seems, at times, to be a deeply troubled person who loves to pick fights. The ownership of the house, for example, is disputed. The last city inspection of her home turned up 37 new code violations – some of which kind of make sense. “The most hazardous issues were the use of the stove and the propane lantern inside, as well as the recharging of the battery,” says Frank Cassidy, the city’s code compliance division manager. “If she ends up blowing herself up or catching fire in that house, then it’s not, ‘why are you picking on this woman?’ It’s ‘why didn’t you do something about it?’”

Those violations caught up with Speronis in June, and she was jailed over a number of trumped-up charges relating to the home and her repeated code violations. That, of course, is because “protecting the system” is more important than letting a looney old widow bathe in rain water.

This story, however, does have a bit of a happy ending for Speronis. On June 16 the city abruptly dropped the animal abuse charges, saying it lacked proof. Speronis was released from jail and given back her dog. On July 4, Roger Desjarlais, the manager of Lee County, which encompasses Cape Coral, e-mailed Speronis an apology of sorts: “I’m hopeful you will not judge the entire Lee County organization based on your experience with our Animal Services department.”

You can read more about Speronis’ ordeal with Cape Coral, Florida’s ridiculous grid laws by visiting the source link, below, and see more of Ms. Speronis’ home and kitchen by heading over to Bloomberg, which has an excellent, in-depth (and probably a fair bit more objective) article on the woman’s trials and tribulations. Once you’re up to speed on the details, let us know what you think of Cape Coral in the comments, below. Enjoy!