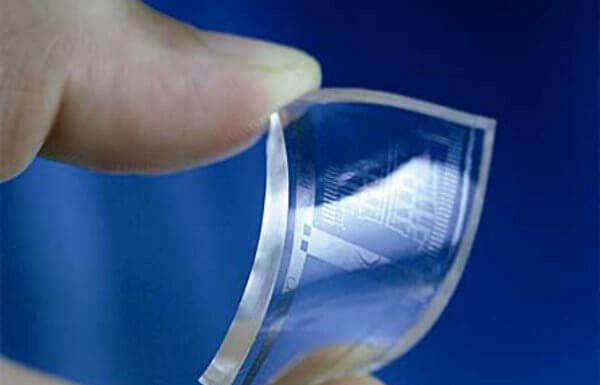 You are here: Home / Building / Graphene Graphene is a thin carbon layer arranged in a chicken wire pattern one atom thick. It’s the thinnest material in the world. (What could be thinner than one atom?) Not only thin, but more than 100 times stronger than steel, transparent and flexible to boot.

The graphene layer can be manually peeled away from graphite (like in pencils) using regular adhesive tape. University of Manchester professors Andre Geim and Konstantin Novoselov just won the Nobel Prize for their scotch tape experiments. This vapor-deposited graphene appears to retain the qualities of manually-peeled graphene. Electrons travel along the 2D surface of graphene at speeds nearing the speed of light—making it ideal for circuitry. “Graphite is a crumbly substance that resembles a layer cake of weakly bonded graphite sheets. When graphene is wrapped into rounded forms, fullerenes result. They include honeycombed cylinders know as carbon nanotubes and soccer-ball shaped molecules called buckyballs as well as various shapes that combine the two forms.” From above. Source