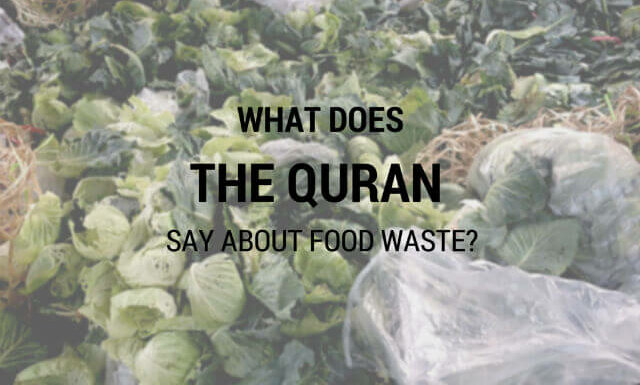 You are here: Home / Homestead Living / Culture / Food Waste & Faith: What Does the Quran Say about Wasting Food? 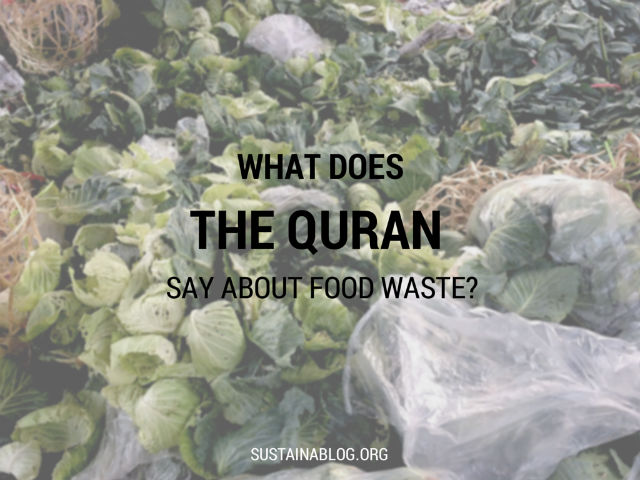 As you might expect, we’ve discussed the environmental impacts of food waste on numerous occasions. We’ve also discussed the economics of sending edible food to landfills, as well as the innovative ideas created to address this waste. But food waste as an issue of faith? Actually, it makes total sense: certainly, it can’t be moral to dispose of food that people who are hungry could eat… can it?

The Hebrew scripture and Christian Bible speak to the notion of gluttony, but (to my knowledge, anyway) the Quran is the only holy book of the Abrahamic religions that speaks directly to the waste of food. Aisha Abdelhamid of our sister site Eden Keeper wrote about this topic very thoroughly at the beginning of the week, and I was just itching to find a place in the schedule for her post.

It’s easy to see why ancient cultures might have put a religious prohibition on the waste of food: their survival wasn’t guaranteed, and hunger was just a poor harvest away. Share your thoughts with us on Islam’s approach to the morality of waste. And, if you know of other religious obligations or prohibitions here, let us know about them… I’m fascinated by this topic.

UPDATE: Thanks to former Green Options writer and mom blogger extraordinaire Jessica Wilzig Gottlieb for filling me in on Bal Tashchit, the Jewish commandment forbidding wanton destruction and waste. In Deuteronomy 20:19-20, this concept is expressed specifically in terms of food waste…

Since the beginning of time, waste has been an environmental issue for humans. Waste is often equated with trash, but even before the existence of trash, there was waste. Understanding the various forms of waste can help us identify ways to avoid and reduce it. Muslims have had lessons on avoiding and reducing waste for over 1,400 years and we can all benefit from the guidance offered in Islam.

It is He Who has brought into being gardens, the cultivated and the wild, and date-palms, and fields with produce of all kinds, and olives and pomegranates, similar (in kind) and variegated. Eat of their fruit in season, but give (the poor) their due on harvest day. And do not waste, for God does not love the wasteful. [Quran 6:141]

From this verse we comprehend that food is a primary source of waste. Leftover food in the days before refrigeration was probably a perilous invitation for predators to come visiting. Even today, leaving food out for the bears while camping in Yosemite is a dangerously bad idea. However, not only does God command us not to waste, but in the same verse He also teaches how to avoid it. God instructs us to share our food with the poor — not from leftovers after it’s been to the market, but on the same day it is harvested.

During ten years of life as a small family farmer in South Carolina, I saw a criminal degree of commercial food waste firsthand. Not only did we raise animals for halal meat, we also planted two acres of fruit trees. Taking fruit to market requires separating the very ripe fruit away from the fruit that will handle to sell for a few days. Imagine offering that very ripe fruit to the poor, how thoughtful and generous. No matter who you give it to, it’s much better than discarding it as “rotten” because it won’t handle transporting to the market.

This verse also identifies waste that occurs with consumption of food outside of its natural season. “Eat of their fruit in season” implies that this is better for us than, for example, importing grapes from halfway around the world. It is possible that this one simple command might have spared us all from global warming had we simply followed the guidance from Islam. Just think of all the fossil fuel emissions we might have avoided from only eating what is in season locally.

Waste as a Result of Excess

Waste is also a problem resulting from having too much. It may be the most sweet cantaloupe you will ever eat in your life, but if the farmer planted too much cantaloupe, it’s going to go to waste. Allah addresses this problem of excess in the Quran:

O you who believe! Do not make unlawful the wholesome things which God has made lawful for you, but commit no excess for God does not love those given to excess. [Quran 5:87]

Excess produce is a problem every farmer tries to cope with in a variety of ways. In the case of small family farms, neighborly sharing always was, and still is, a regular practice. In Islam, Allah requires that Muslims share a portion of every harvest with the poor in our neighborhoods. But, sadly, industrialized commercial farming practices have led to the worst forms of food waste due to excess.

Many acres may ripen their produce all at once, and often laborers can not physically harvest fast enough to avoid food spoilage. Sometimes whole fields of produce lay rotting in the sun, and it’s a very depressing sight. My husband and I drove up to the house of a farmer with huge fields full of rotting cantaloupes. The farmer told us the field is under contract, and no more money would be paid for laborers because it was late in the season and the cost of labor was higher than the value of the cantaloupes.

And don’t imagine the poor people in the neighborhood are allowed to take from those fields. We asked about that, too. Even the migrant farm workers are not allowed to do that. Contract farms are tightly patrolled and trespassers will be prosecuted – if they’re lucky and don’t get shot at.

Next, the produce that does get harvested and packaged is distributed to wholesale produce markets in huge quantities. This also is far more produce than can be distributed to grocery stores and restaurants without avoiding another huge loss of food to spoilage. Men drive forklifts around all day in the wholesale markets, carrying pallets of rotten produce to the dumpsters. The dumpsters are also patrolled, and it is illegal to remove any produce from them.

Drive behind your local grocery store and you will witness the next round of food waste from huge quantities of fresh produce on permanent display inside the store. But if it gets one little black spot on it, out it goes, onto the heaping, rotting pile out back. There are some grocery stores where poor people can stealthily grab from the dumpster out back, but in most communities this is definitely illegal trespassing, and I have no idea where poor people can turn for food. Thank God for religious organizations and food banks because harvest day sharing isn’t happening on commercial farms, wholesale markets, or out behind the grocery stores.

Gluttony as a Form Of Waste

From the two verses above, we can understand that God has provided a wide variety of delicious and lawful, or halal, food for us to eat. We can infer from this that God intends for us to enjoy our food, and understands our pleasure in having a wide variety of flavors. This is confirmed by the fact that He gave us taste buds to appreciate the various flavors of food which He provides. But eating excessively, on the other hand, carries a terrible penalty:

Gluttony is a form of personal sabotage, leading to a large number of health risks. Overeating may be seen by many as a simple act of self-indulgence in the presence of delicious food, but God obviously doesn’t see it that way. It is easy to understand that unwholesome consumption, like taking drugs, clearly carries dangerous health risks. But the 1,400-year-old lesson here is that even the good, wholesome foods carry dangerous risks when eaten excessively.

Obesity and diabetes, among other life-wasting conditions related to overeating, are risks that God clearly would like us to avoid. And, just as we put the spoon in our own mouth with our own hand, God makes it clear that we are responsible for our own condemnation: “he upon whom My condemnation falls has indeed thrown himself into utter ruin.”

“Jonesing” Is Another Form of Waste in Islam

“Keeping up with the Jones’s,” or conspicuous spending for the sake of prestige, is not an evil born of 20th century, Western society. It is clearly present in the earliest days of Islam, in the Saudi Arabian desert society of 600 A.D., as we see in the following verses of the Holy Quran:

Children of Adam! Wear your beautiful apparel at every time and place of prayer and eat and drink. But do not be excessive – verily God does not love the wasteful. [Quran 7:31]

Not only are we provided with delicious food, but we are also encouraged to wear our beautiful clothes when eating, drinking, and praying. Clearly this is community socializing, and donning your duds is not discouraged. On the other hand, in Islam showing off your personal fortune by spending it on an outrageously expensive outfit is both excessive and wasteful.

Social spending can spiral out of control when being seen as Mr. or Ms. Big Spender becomes more important than enjoying a community gathering. Peer pressure is a trigger for conspicuous spending throughout a community, leading to envy, jealousy, and back-stabbing. Families and whole communities can be destroyed this way, but God provides a warning against this hateful form of waste. And, in fact, even the cycle of peer pressure can be broken easily by following the simple words of the Prophet of Islam:

It is easier to count our blessings when we focus more on the poor people around us, rather than the rich. When God is our mentor, our peers become less impressive. And when we read all this down-to-earth guidance about avoiding waste, it becomes clear that the answers in Islam are simple. They are personal and self-evident.

We need only to focus on our own personal attempt at avoiding waste, and the net effect is possible to ripple through the entire population. Our environment will not change. We will not wake up one morning to a lovely clean environment without each one of us turning our attention inward.

I am not responsible for anyone else’s waste but my own, and no one else will clean up my waste for me. But, God willing, if I clean up my mess and stem my own flow of waste, then I’ll be free and very happy to help out wherever I can!