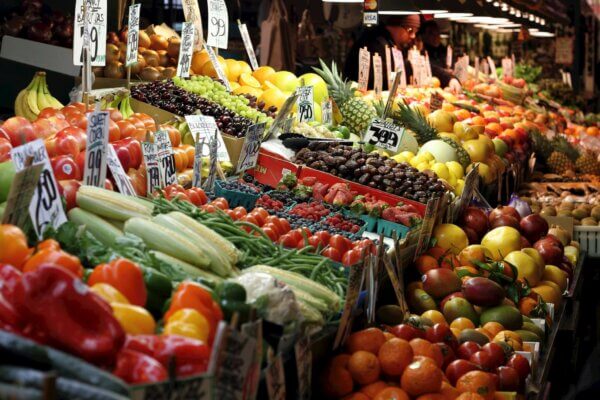 For detailed USDA specifics see below…

Rates of pesticide application vary significantly among crops…
Vegetable and Fruit Washes:
Make your own produce wash with either a couple of teaspoons of vinegar or a few drops of eco-dishwashing liquid or organic castile soap in a few cups of water, dip the fruit or vegetable a couple of times and then rinse with clean water. Or thoroughly, but softly scrub the produce with the solution, then rinse with water.
“Researchers in Texas substantially reduced the pesticide residues on 17 popular fruits and vegetables by washing in a dilute solution of dish detergent (1 tsp. per gallon of water),
then rinsing in slightly warm water” [11].
In the 2005 and 2006 data the USDA tested for 252 parent pesticides, metabolites, degradates, and/or isomers. The fruits and vegetables were tested after peeling or washing.
2006 data supplants 2005 data when available [5].
Approximately 82% of all samples were from US growers and 16% were imported [6].
Processed Fruit and Vegetables
‘ In most instances, washing by itself was shown to reduce residues, blanching reduced them even further, and the canning process led to even further decreases” [3].
But, remember the USDA washed the F&V samples (above) before testing.
That’s a lot of Cooking!
It was shown that thermal processing of spinach at 110°C for 60 minutes and apricots at 100°C for 50 minutes decreased the initial residue by 100 and 60% respectively. After one year’s storage of canned apricots at ambient temperatures the remaining residue had disappeared totally (Elkins et al. 1972). Household cooking of deep frozen beans with about 1 mg/kg azinphos-methyl for 15 minutes decreased the residue by about 85% (Carlin et al. 1966).
(Anderson et al. 1963, Gunther et al. 1963) [7].
‘Residue levels in lettuce were 40-80% lower when the guard leaves were removed.’ (8)

University of Copenhagen. Reference to: Heaton S. 2001. Organic farming, food quality, and human health: A review of the evidence.

National Institutes of Health. Occurrence of pesticide residues in raspberries in 2000-2005.

National Academies. Pesticides in the Diets of Infants and Children (1993) Commission on Life Sciences. ‘Elkins (1989) reported NFPA data on the effects of food processing operations on the residues of pesticides permitted on raw agricultural commodities…

USDA’s Pesticide Data Program is a national pesticide residue database program. Through cooperation with State agriculture departments and other Federal agencies, PDP manages the collection, analysis, data entry, and reporting of pesticide residues on agricultural commodities in the U.S. food supply, with an emphasis on those commodities highly consumed by infants and children.

Overview of the USDA’s Pesticide Data Program from 1993 through 2003.

American Museum of Natual History printable guide lists the fruits and vegetables that are typically most likely to have higher pesticide residue levels.