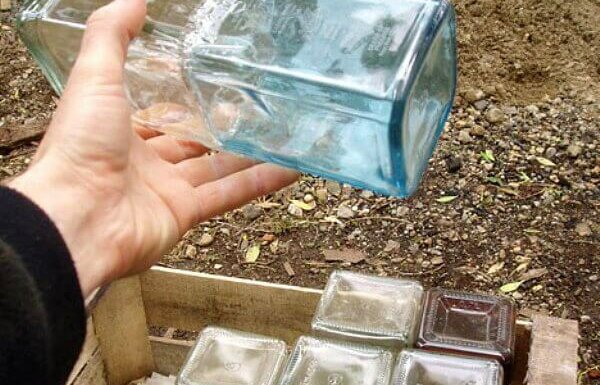 Instead of cutting down trees, re-use glass bottles to form the structure of your home. Tom Kelly, a miner in treeless Rhyolite, Nevada, had this idea back in 1906. More than a century later, Rhyolite’s a ghost town—and Tom’s weird amalgam of 50,000 glass bottles is one of the few buildings still standing.

An arts center in Deep Ellum, Texas. The picture was found on Vitreosity without the story of its origin.

You can see how the bottom of the bottles affect the shape the light creates in the wall.

An Earthship Home. Note tires and cans as well.

Anna’s bottle house in Tucson, Arizona. Trip Advisor includes some descriptions by people who have stayed at this B&B.

You can see how the designer made sections without bottles, allowing unfiltered light to pass through.

In Taos, another Earthship. Bright light, but private. From New Mexico, you can rent one of these homes. More information is on their site.

Kawakawa, New Zealand men’s public toilet from the outside.

The Bottle Chapel at Airlie Gardens, North Carolina, a tribute to Minnie Evans.

Close up at Airlie Gardens. Their website says that 4,000 bottles were used to create this masterpiece.

The sides of the chapel. Airlie Gardens Foundation has more information and videos on their site.

Here’s an eclectic room. An artist’s studio in New Zealand.

Prince Edward Island Bottle House. Photo from Keith Watson on Flickr. According to Kieth, the house had originally fallen apart, leading to its reconstruction.

Glass wall Biotecture, Ireland. This photo can be seen on Voila.bz.

Walkway at Wat Lan Kuat, Thai for “The Temple of One Million Bottles.”

Wat Lan Kuat (One Million Bottle Temple) in Khn Han, Eastern Thailand. Here’s a video on this temple in Thailand.

Tom Kelly’s Bottle House Rhyolite, Nevada, built in 1906.  This amazing home was restored later, as stated by What About The Plastic Animals?

Light radiates from this glass bottle structure. The green and white bottles create a stunning contrast.

17) Wall Of Metal And Glass

EarthShip Photo: Earthship Kristen, Flickr. You can only imagine what the inside of this Earthship must look like!

A wall made of cordwood and bottles. The glass bottles create a beautiful glow around the window. This photo can be found on Vitreosity. Originally found at krepcio.com/vitreosity/archives/cat_bottle_walls.html

Manuel Rapoport has built a house in Bariloche, Patagonia, Argentina with 100% recycled ingredients. Tin cans for roofing and siding and merged whiskey bottles as windows. Go to www.designopatagonia.com for more information.

Duke’s bottle house in Australia. This home’s glowing red hue is spectacular, looking like a wall of glowing embers. Originally found at krepcio.com/vitreosity/archives/cat_bottle_walls.html

Charlie Stagg’s bottle cave creation — photo by Lawrence Harris. He has done a wonderful job making the columns look like they’re climbing up the wall. Photo originally found at krepcio.com/vitreosity/archives/cat_bottle_walls.html

Tinker town, New Mexico. The small town hosts a large number of creations by Ross Ward. Vitreosity has more information about this fantastic place on their site. Originally found at krepcio.com/vitreosity/archives/cat_bottle_walls.html

Beer Bottle Doors. Girl Vs. Beer features these cool doors on their site, along with other beer bottle creations that may inspire you.

Whiskey Bottle Clock, handmade from melted glass by Boni’s Glass Art in Rehovot, Israel. Boni melts the glass in her home glass kiln and makes the clocks with her granddaughter.

The Heineken WOBO (world bottle), an interlocking beer bottle. Mr. Heineken was a green thinker and designed bottle bricks so his beer bottles could be re-used. But the rest of the company wouldn’t go for it.

Glass bottle chair, just don’t try to use it to open beer.

And to go in your new bottle home, a beer bottle chandelier.

Better yet, this more stylish wine bottle chandelier. Found on Hooked On Houses, you can go to their site for more information.