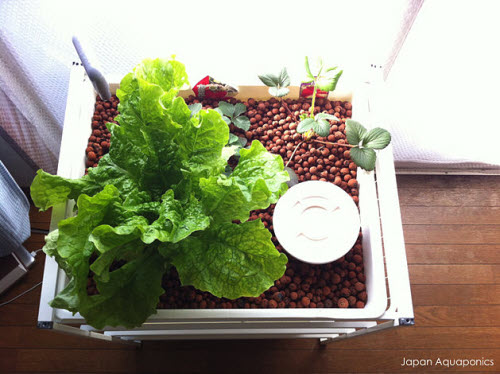 You are here: Home / Living / The DIY Aquaponics System: 6 Plans for Bringing Fish and Plants Together to Grow Food

Aquaponics is one of those concepts that I’ve known of peripherally for years, but didn’t really give much thought to until I came across plans for The Plant in Chicago. Putting fish and plants together in a closed loop (that’s organic by necessity) strikes me as a brilliant use of biomimicry… or, at least the notion that “waste equals food” in the natural world. But The Plant’s a huge endeavor – can a backyard tinkerer put together an aquaponics system on the cheap?

In short, yes… and, as with other DIY projects, the creators of these systems are eager to share. After digging around the web, here are a few of the best (or, at least, most interesting) plans that I came across.

Neal McSpadden’s demo aquaponics system sits on the balcony of his apartment, and makes use of readily available materials like 5-gallon buckets. You can’t grow edible fish in a system this size, but he does have range of vegetables growing. A good video if you’re still scratching your head and thinking “I don’t get it.” (via off-grid)

No, IKEA does not sell aquaponics systems; this plan at wikiHow, though, uses the retailer’s Antonius frame and wire baskets product as the basis for one. This looks ideal for indoor use: very self-contained. (via SuburbanFarming at reddit)

As you might imagine, Instructables has a number of aquaponic projects available. Engineering for Change’s plans received lots of good feedback; they’re also very plastic-heavy, though (if that bothers you). On the upside, there’s lots of room for reuse here: no need to go out and buy the barrels, for instance, as you can probably find some used ones. (via lifehacker)

Aquaponic Steve’s greenhouse and aquaponic system hybrid ain’t pretty… but, judging from his update videos, it works, and won’t cost you a bundle to build. I’m calling it a “hybrid” because it doesn’t appear that the plants and fish (crawfish, in this case) “feed” directly off of one another; rather, Steve has his plants in the ground, and filters the fish water with a separate filter made from moss and shells. (Also via off-grid)

The Piranha Lake in the Basement System

OK, we’re getting bigger now: this indoor lake was designed primarily as an aquarium. But the designer’s using a hydroponic set-up for easy cleaning and care: he notes he’s “trying to create a system that requires practically no attention other than feeding.” At 300 gallons, it seems to me that this would be a great indoor set-up for growing edible fish in addition to vegetables.

The Old Bathtub as a Fish Tank System

If you want to explore the possibilities for small scale aquaponics at all, then the Backyard Aquaponics forums seem like required reading – folks at Permies swore by them! Sharing your own DIY system is part of the culture there, so I had lots from which to choose: I went with user eco’s plans because they include some reuse, and because s/he included lots of pictures.

Not only does the video not provide straightforward DIY instructions, but it’s also well beyond what most people are going to want to do. But it’s definitely worth checking out:

I’m still pretty new to this whole concept, so feel free to add your own comments, ideas, and corrections. If you’ve tinkered with an aquaponics system, tell us about it.