Should celebrities be more careful about their endorsements? A new study found that celebrity endorsements of food products encourage less healthy food choices.

What do Taylor Swift, Kelley O’Hara, and Justin Timberlake have in common? These celebs– and hundreds like them– are being called out for promoting unhealthy foods to consumers. 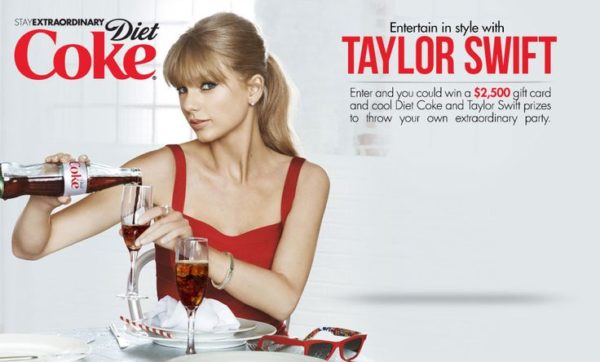 I’ve written about my disdain for these types of celebrity endorsements before, when talking about soccer star Kelley O’Hara’s chocolate milk campaign. I feel really strongly about celebs endorsing unhealthy food, because I think that as idols and icons, celebrities need to think beyond inking the sponsorship deal and concern themselves with what message they are really sending their fans. 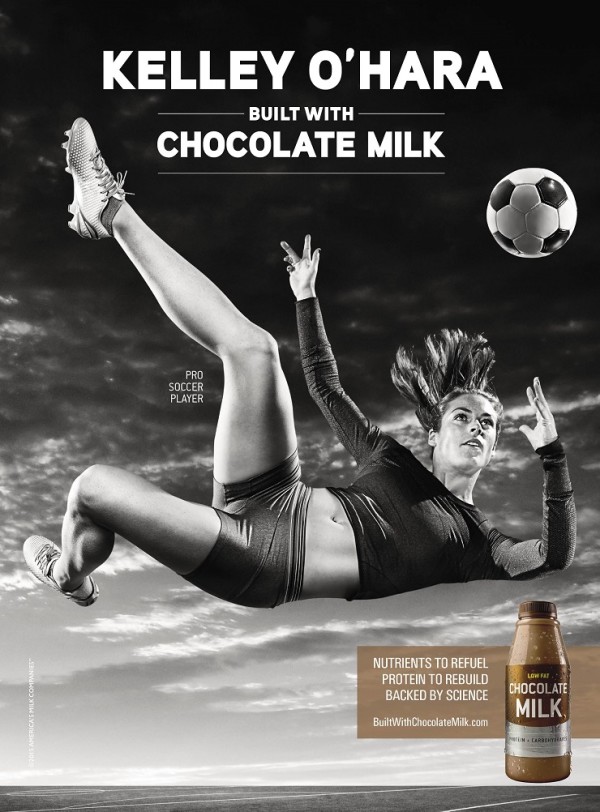 As reported in Time, a new study from NYU found unhealthy products endorsed by our favorite singers, actors, and sports stars are one of the major reasons that we eat so poorly in this country.

GOOD explains that “A whopping 81 percent of the endorsed food was considered grossly unhealthy, aka ‘energy-dense, nutrient-poor products.’ And seventy-one percent of beverages in the study were sugar-sweetened.” The chart below (from GOOD) examines in detail who your favorite star is shilling for, and if you took out the names one would assume you’re reading a list entitled Worst Foods To Put in Your Body. 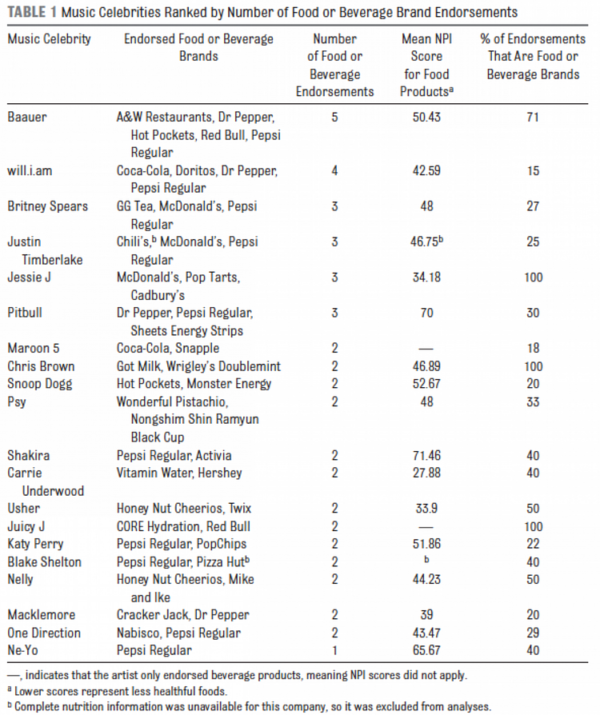 I understand that celebrities are looking to make more money, and I realize that it’s the biggest companies that have the most money to spend. But are you ready to be freaked out by just how much money we’re talking about here? Time reports that in 2012, “Beyoncé signed an estimated $50 million endorsement deal with Pepsi, and Justin Timberlake received an estimated $6 million for his role in the McDonald’s ‘I’m lovin’ it’ jingle.”

Not only is that an insane amount of money overall, but when you’re shilling processed food products that are linked to obesity, diabetes and cancer, there are serious moral issues. Shouldn’t that go beyond the dollar figures? We all know that whether you’re 14 or 40, seeing your favorite star endorse a crappy product can make you crave it. It’s time for us to stop listening to them!

You might be wondering, as TakePart did, how many endorsements include a remotely healthy option. Surely there must be some, right? At the time of the study, it looks like the answer was just one. Korean pop star Psy dances with pistachios, which are a great source of protein and healthy fats. But that’s it! Everything else is total food garbage. Let’s bask in the glory of this one healthy celebrity endorsement.

The good news is that we’re starting to see some changes! Venus Williams and DJ Khaled recently starred in a campaign for Silk plant-based milks. And I was super excited to hear that Stephen Curry, gorgeous and talented basketball star of the Oakland team Golden State Warriors, endorses Brita water filters for, you know, actual hydration, instead of sugar-infused chemical water.

What endorsements would you like to see your favorite stars or sports icons represent?