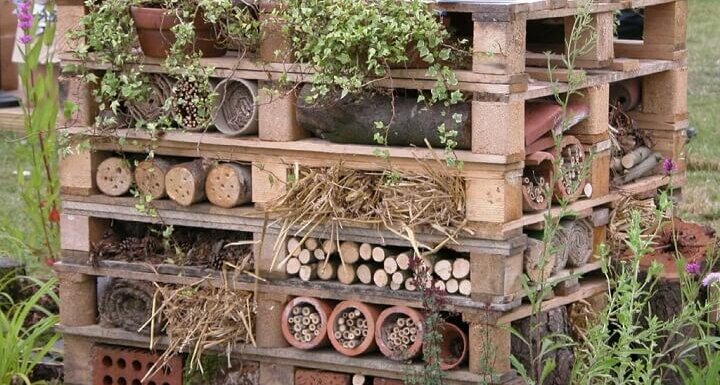 What Is An Insect Hotel?

Insect hotels are winter lodgings for your backyard crawling and flying bugs. Usually made of found or upcycled materials around your yard, these hotels consist of different suites catered to each little bug’s preferred lodging taste. Most hotels are constructed with a strong protective frame of wood boards or pallets and are filled with a variety of bug-friendly materials like straw, cork, sticks, or pinecones.

Why Build An Insect Hotel?

Insect hotels provide safe areas for solitary insects to hibernate over winter. Big lawns and the lack of dead wood in our yards leaves wild bees, spiders, and ladybugs without a place to live. Building accommodations for beneficial insects like ladybugs or flying pollinators can help benefit both your environment and your garden in the spring.

A wildlife stack can harbor numerous beneficial insects and amphibians. This habitat was made up entirely of recycled materials, the support is made up of old pallets. Image copyright: Cheshire Wildlife Trust, cheshirewildlifetrust.org.uk Some creatures like it damp, others—prefer a dry home. Ladybugs hibernate during winter in piles of dry twigs and leaves, which you can provide in your insect hotel. Might be better to think of it as habitat or a condo. What you really want is long-term residents. Photo by Sarah Barker at the Shrewsbury flower show. Flickr Solitary bees like sun. The ideal location for an insect hotel is in full sun and protected from the weather. This will ensure that the heat required for the brood is present, and wind or rain will not destroy their nest. Provide that, and the flowers, and they will come. www.sav-überlingen.de Solitary bees are different from social bees (such as honey bees) in that every female is fertile and makes individual nest cells for her offspring. Some native bees are ground nesters but more than 30% are wood nesters. The female wood nester will look for pre-existing cavities such as hollow stems or holes in wood that are just the right size to use as a nest.

The female typically creates a series of compartments (cells) and within each cell she will lay an egg on top of its future food source. The female bee will make numerous trips to flowers collecting pollen and nectar that she will pack into each cell. On these trips, the female wild bee pollinates plants and food crops. It can take anywhere from 20 to 30 trips to fill each cell with food.

When she is satisfied with the amount of food, she lays an egg, compartmentalizes the cell, and moves on to creating the next cell. When she feels the chamber is complete, she seals off the end, and moves on to filling a new chamber. The last cells (those closer to the opening) contain eggs that will become males, as males hatch before females.

Although each species is different, mason bee females live for about a month, and can build a cell nest for about two eggs every day. The larva hatches from the egg after a week or more and begins to eat the provided pollen and nectar. After the food has been eaten, the larva spins a cocoon and pupates within the cell.

By the end of summer or early fall, the bee transforms but remains in the cocoon as an adult throughout the winter. In spring, the males begin to emerge by chewing their way out. The females, which are almost always in the deeper cells of the tunnel, emerge a week or two later.

While solitary females each make individual nests, some species prefer to make nests near others of the same species, giving the appearance to the casual observer that they are social. Nest photo by Mike N. of Vancouver, BC. Bug hotel in Oakham, UK at the Lyndon Nature Reserve, built by Paul Stammers and Michelle Househam. Although often called a hotel, some bees will live in a nest for up to nine months as they develop from egg, through the larval stage, into adulthood. Photo by Anne Crasey, Flickr.

30 Amazing Insect Hotels Around The World

Insect hotel in Hamburg, Germany. Wild bee houses have been popular in Europe for many years. You can see more bee homes at insektenhotel24.de.

Insect hotel at the Heimanshof, North Holland. Many solitary bees are very small and you may not have realised they are bees. More species of bees live alone, than in hives. Wild bees are considered to be as important to the food chain as bumblebees and honeybees. Honey bees are not native to the Americas (see below). Photo by Bob Daamen, Flickr

Related Post: 18 Creative DIY Beehive Plans for Your Own Beekeeping

Insect home or bug bank, on the grounds of Oxburgh Hall in North Norfolk. Because solitary bees have no hive to defend, they are not aggressive, they rarely, if ever, sting. Photo by Mabvith, Flickr.

4) Bug Habitat Near Some Flowers

Insect hotel in Helmsley, UK. Hotels should be relatively close to flowering herbs, wild flowers and native shrubs and trees to cover the food needs of the insects. Photo by Munki Munki, Flickr.

With this design, you can make the most of your space by increasing the surface area of a “smaller” sized hotel.

Insect hotel in Hoofddorf, Holland. Drilled 4 x 4s, logs, twigs and sticks. There are many different species of solitary bee, all are excellent pollinators. Photo by Bob Daamen, Flickr

Insect hotel in St. Poelten Landesmuseum, Austria. That shutter will keep the birds out. Photo by Klasse im Garten, Flickr.

Bug stack. Keep an eye on activity as some ants will eat bee larvae. More on attracting insects to your garden can be found in the conversation held at sww.infojardin.com.

Finding the resources for a bug hotel can be fairly easy because you don’t need to buy a lot of materials.

10) Bug Hotel For The Garden

Bug Mansion. Ladybugs are always looking for places to hide and escape from the weather. By the Harrogate District Biodiversity Action Group. Flickr

Wildlife stack by Dawn Isaacs. The plants on top of this insect hotel helps the structure blend into the garden. How-to: www.guardian.co.uk.

Insect Condo in Scotland. Don’t be discouraged if insects don’t immediately come to your insect hotel, it may take several months before they nest. Photo by Sheila, Flickr.

14) Bee Hotel From An Old Stump

Wild Bee Hotel in Austria. More information on this photograph can be found here on Flickr.

Insect Hotel in a private garden in Austria. This picture was found on www.klasse-im-garten.at, where you can discover even more ideas for your garden.

Insect Hotel (Zen-like). Found on www.wildbienen.de, you can go to their page to find out more on wild bee conservation.

This bug bank was designed for both function and appearance.

A fun learning project for kids.

24) Insect House From The Netherlands

Insect hotel in the Netherlands, close-up.  Found on Flickr.

An ‘Insect hotel’ at the Durrell Wildlife Conservation Trust in Jersey ©RLLord, www.sustainableguernsey.info.

Insect Habitat assembled from foraged organic materials and reclaimed scrap, a habitat-in-waiting for bees and other native creatures. By Kevin Smith and Lisa Lee Benjamin. Originally found on floragrubb.com, you can find out more information at pithandvigor.com.

Insect Habitat at Garden Tulln, Austria. More information on this photograph can be found on Flickr here.

Insect Hotel in Germany. This is another picture from the informational site www.wildbienen.de.

Bug hotel by Lisa and Andrew Roberts (Living Willow Wales) at Ysgol Pontrhydfendigaid. You can find this picture and instructions on andrewroberts.net.

Bug hotel created by kids at the RHS Flower Show, Tatton Park. More information about this photograph can be found on Flickr.

Who Lives In An Insect Hotel?

Bees: leafcutter bees, masked bees, mason bees, digger bees and hundreds more…
Bumblebees nest in hollow trees and in rodent burrows. They are among the first bees to emerge in the spring and the last to disappear in fall. They are superb pollinators of tomatoes, blueberries, cranberries, clover, and more. Bumblebees can “buzz pollinate” by hanging on a flower and vibrating with their flight muscles to release pollen.

Mason and Leafcutter Bees select existing hollow stems and bored holes in which to build their multiple nest chambers. They carry pollen underneath their bodies rather than on their legs like most bees, and the pollen falls off rather easily. Mason bees are first-class pollinators of many fruit crops, toiling long hours and in inclement weather. Squash and Gourd Bees help pollinate up to eighty percent of squash, pumpkins, and melons. They are ground nesters, so it is important to leave some open dirt for the these very important bees as well.

How To Build An Insect Hotel

Do not use softwood for bees, as the drilled holes might fill with resin and suffocate the bees! Make sure all wood is free of chemical preservatives. The folks at Crown Bees say that drilled holes and bamboo are not the best for mason bees, since parasites or disease might also invade these homes. They say that mason bees prefer reeds or paper straws, which also allow you to observe the mason bee’s nest. Yet they say even the reeds might attract pests after three years. Crown Bees suggests that trays which are like a block of drilled wood that comes apart for cleaning are best.

Some suggest spraying your existing drill holes every couple of years with a 5-10% bleach solution to keep them free of disease. You might also wish to redrill the holes in case anything is stuck in there (after the bees are gone). Actually it would probably be best to have two sets of nesting blocks, after each washout, drill and store inside, and put out the alternating block.