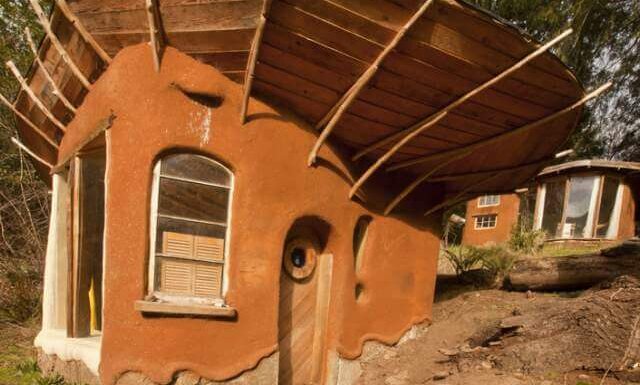 Dwellings in Jericho, which were built in 9000 BC of mud brick, still stand today as testament to the longevity of earthen homes. Cob has also been popular in the UK and Ireland as their soils have a high clay content. Thousands of old cob dwellings are still in use as residences in the UK.

Cob Homes Are Simple And Sustainable

Combine two buckets of clay, three buckets of coarse sand (if your subsoil already has the correct proportions of clay, silt and sand better yet), add some water and straw, stomp on that with bare feet for a bit, form into lumps (cobs) for ease of transport, then start building.

If your subsoil is appropriate, your cob building could be the utmost in sustainability, if you build with local stone and use no machines, there would be no transport of building materials and no fuel use. Plus your home will most certainly not pollute the environment as it will simply return to the soil from which it sprung (many years down the line). You can also reuse cob again and again, take down a wall and then reuse the same cob to build a new wall.

In cob building, a home’s boots (foundation) and hat (roof) are extremely important, as cob should not be exposed to excessive water.

The World’s Most Amazing Cob Homes 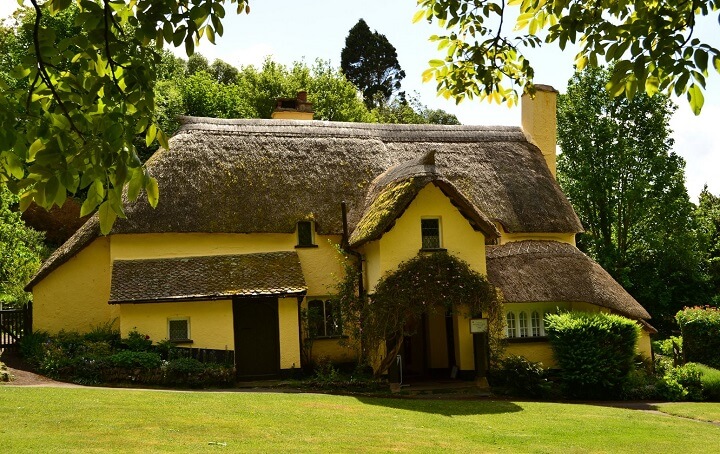 Cob home with thatched roof in Devon, UK. Cob was the prefered building material in the Westcountry until 1940 or so. Image by Helsie: helsieshappenings.blogspot.com 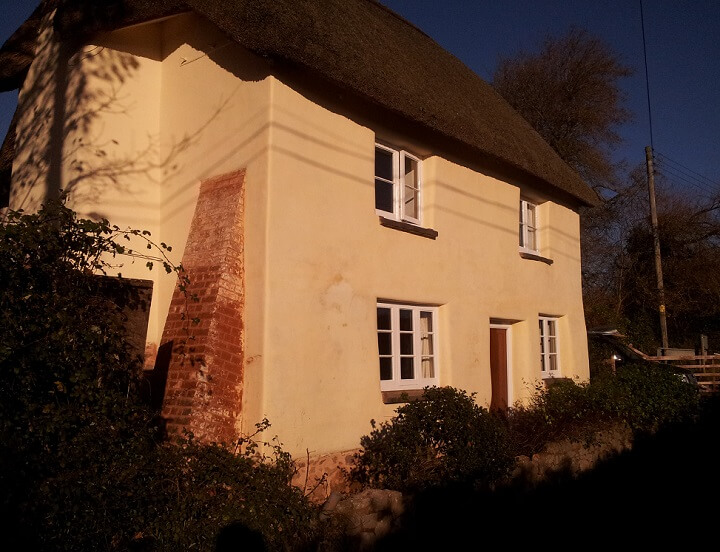 Cob Cottage, Rewe. Renovation by Cob Solutions.
A permeable finish is necessary to allow breathing and to avoid damp walls. Clay based or lime based finishes are best. Decades ago many in the UK coated the exterior of their old cob dwellings with a cement render. As the render was compromised with time, water that got into the cob had no avenue for escape and the trapped water slowly ate away at the cob. Cob walls need to breathe. cob-solutions.co.uk 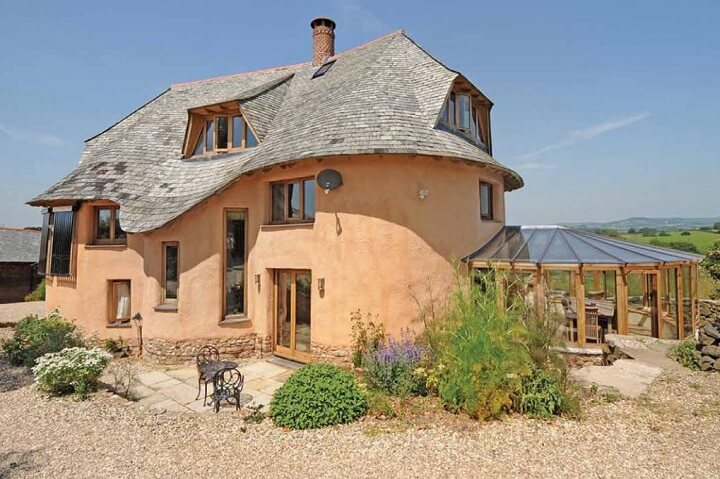 Cob home in East Devon, UK.
Built in 2001 by master cob builder Kevin McCabe. This cob is from on site and so this home literally grew up from the soil. buildsomethingbeautiful.co.uk 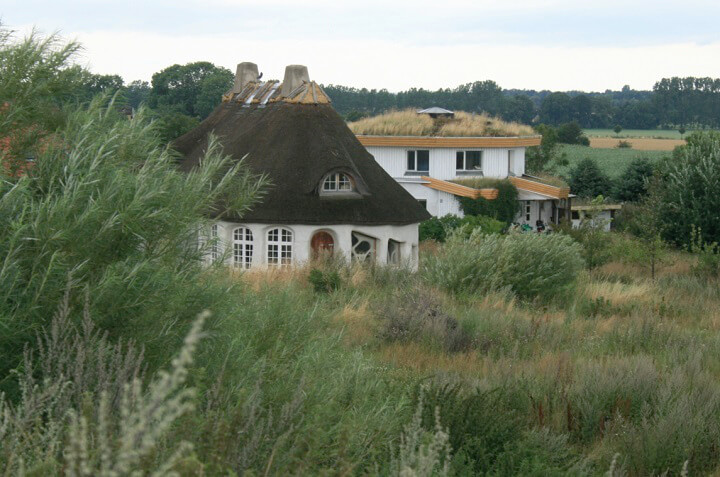 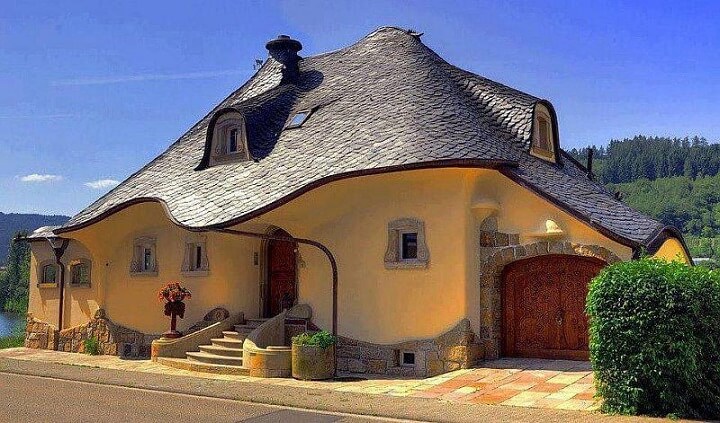 Cob and stone home. Via: facebook.com/cordwoodconstruction 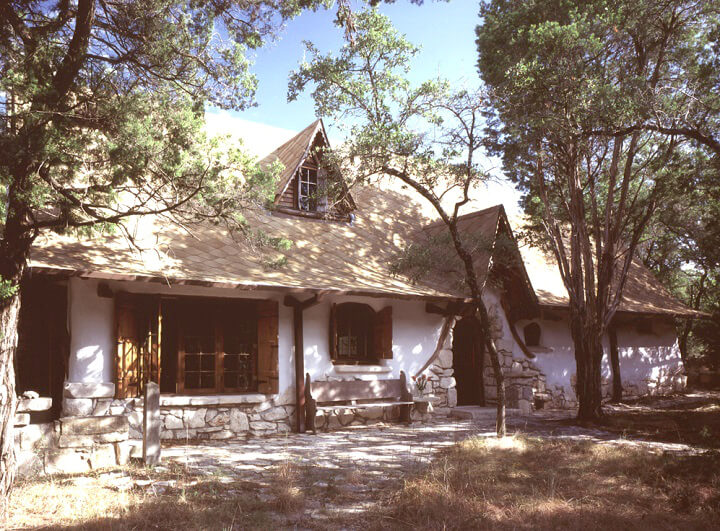 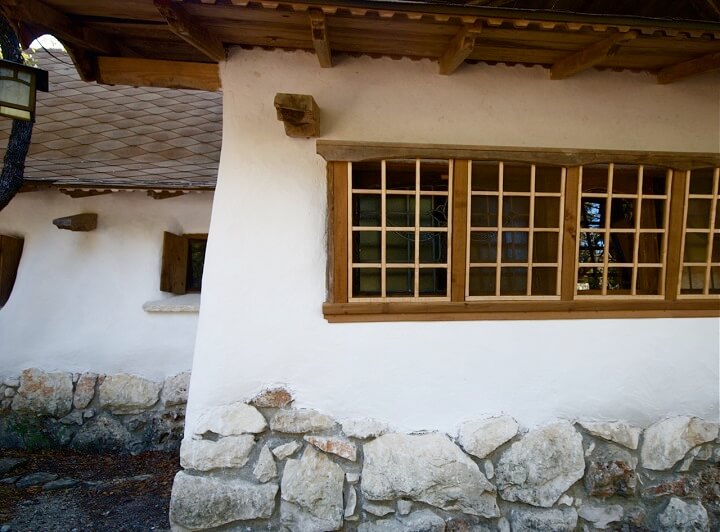 Cob (actually more clay-slip than cob) home.
Gary built ‘flimsy’ plywood forms to hold the cob in place. The base of the building is intentionally wider than top of the wall. Instead of adding sand he used just clay and straw in his mix. placepatterns.org 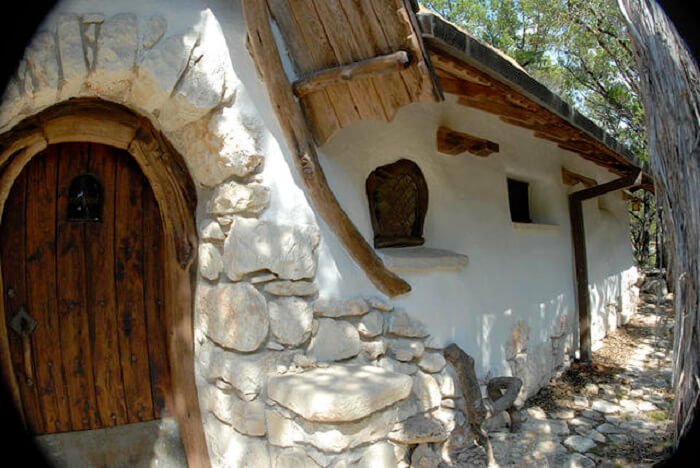 Cob home.
Gary Zucker muses as to scale, materials and beauty. A must read here: placepatterns.org 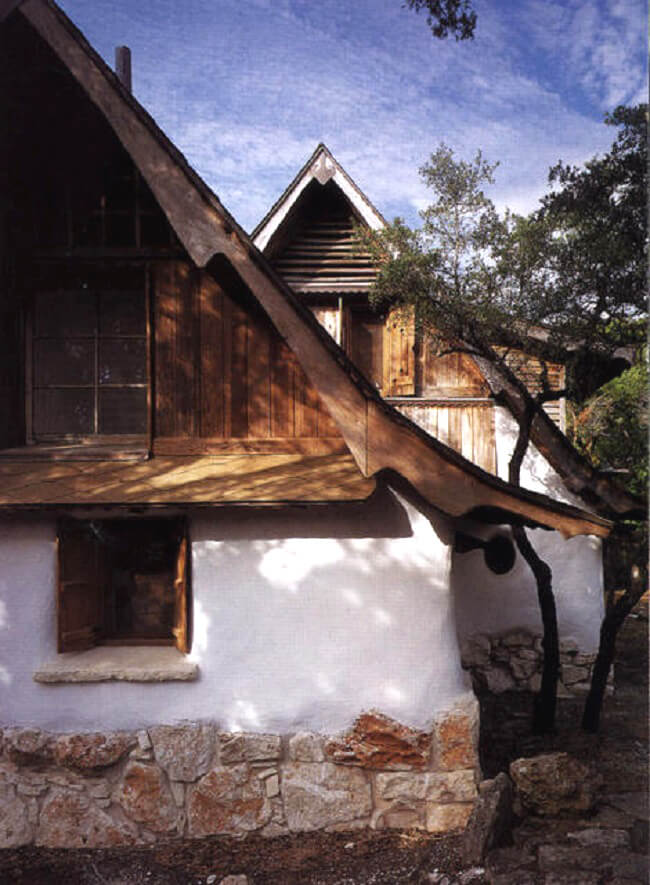 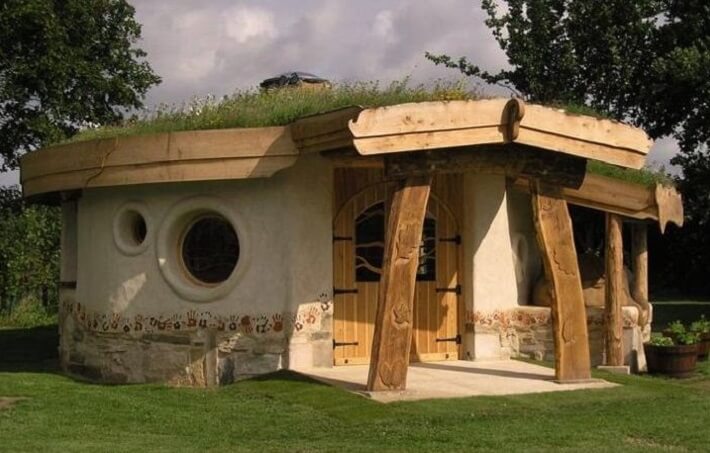 Cob Building.
Earthed was contracted by Slimbridge WWT to build a cob and timber frame viewing gallery to house a new exhibition of wetland mammals. The cob walls in combination with a timber frame structure supports a ˜living roof of wild flowers and are finished with a lime plaster and earthen render. earthedworld.co.uk 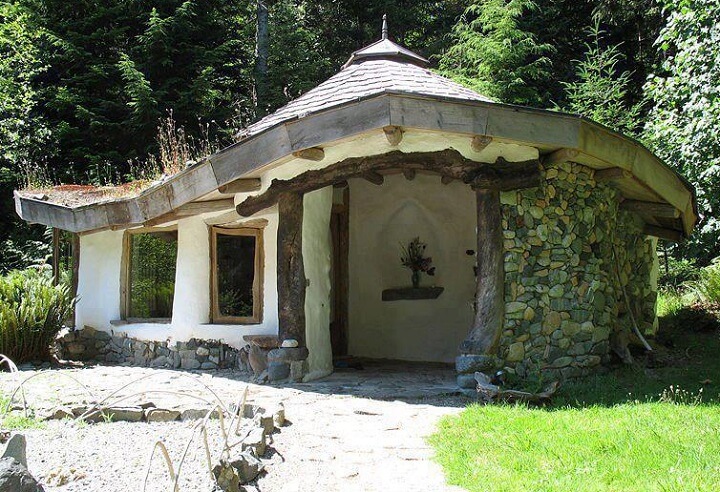 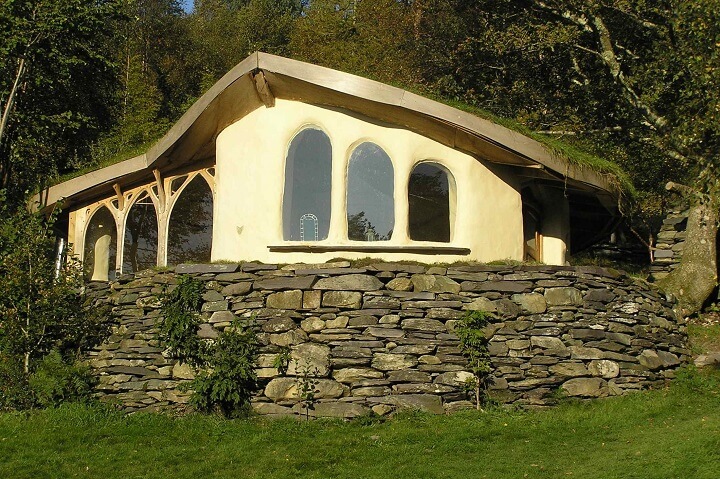 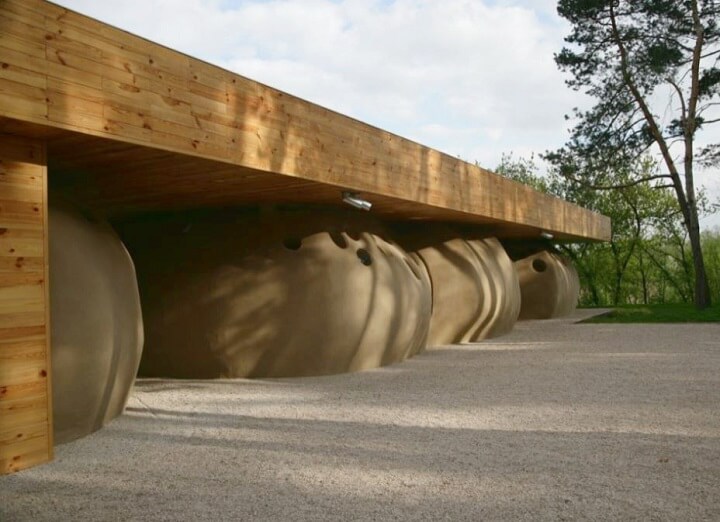 FriendHouse Eco Hotel, Orel River, Ukraine.
The dome rooms were built using traditional Ukrainian building methods where a wooden framework is coated first with a mixture of clay and straw and then with clay mixed with sawdust. By Ryntovt Design. ryntovt.com 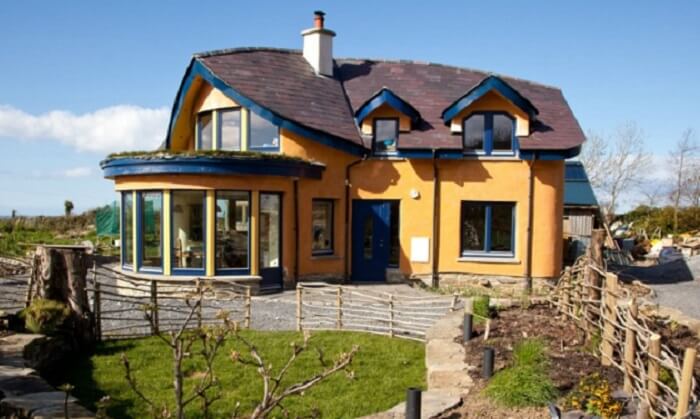 Cob home in Ireland
By Colin Ritchie and Féile Butler. They give workshops.
80% of the materials used were salvaged. Total cost: €114,000 includes €45,000 for windows and heating, plus €5,000 on a rainwater collection system. Their home heating bill last year was €115. mudandwood.com 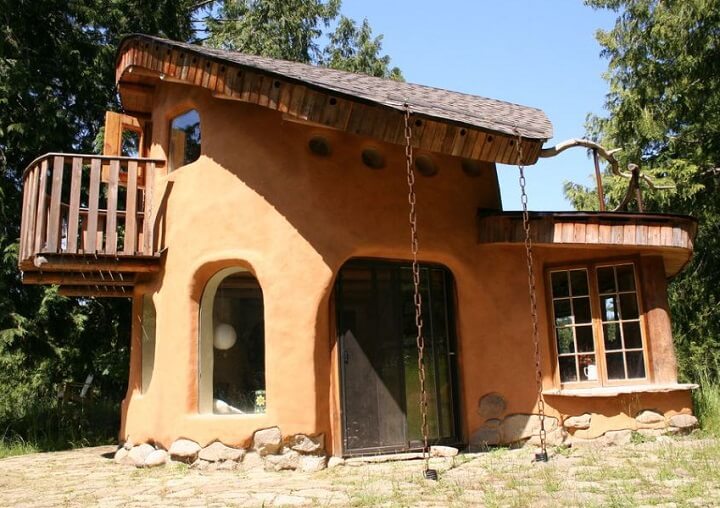 Hilde’s Cob house built in 1999 during a 3 week workshop led by Ianto Evans and Elke Cole. The roof was put on that fall and the following spring the interior finishing was completed by Tracy, Elke and Patrick. Hilde’s project was the first cob fully permitted as a house in Canada. The roof is totally load bearing on the cob walls. The house is 600 sq.ft on 2 floors and is fully plumbed and wired. Finished cob and roof construction costs were approximately $56,000. cobworks.com 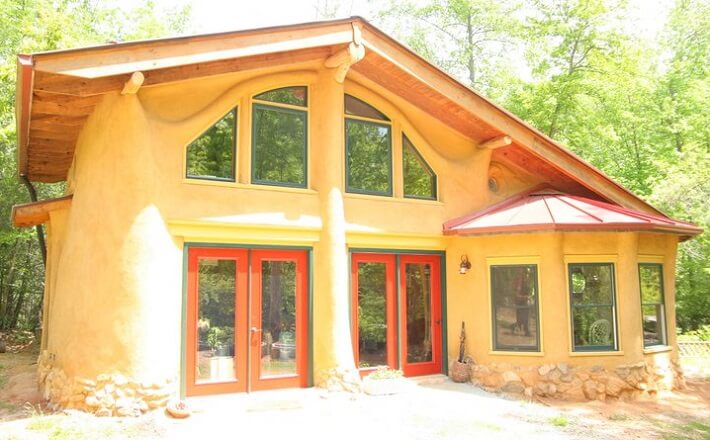 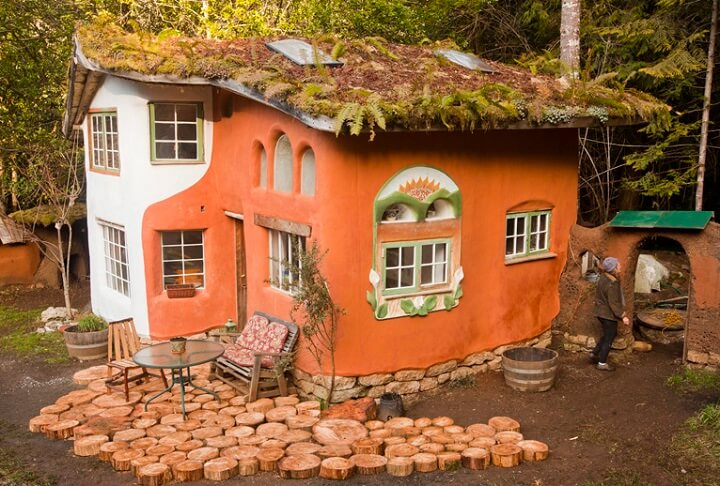 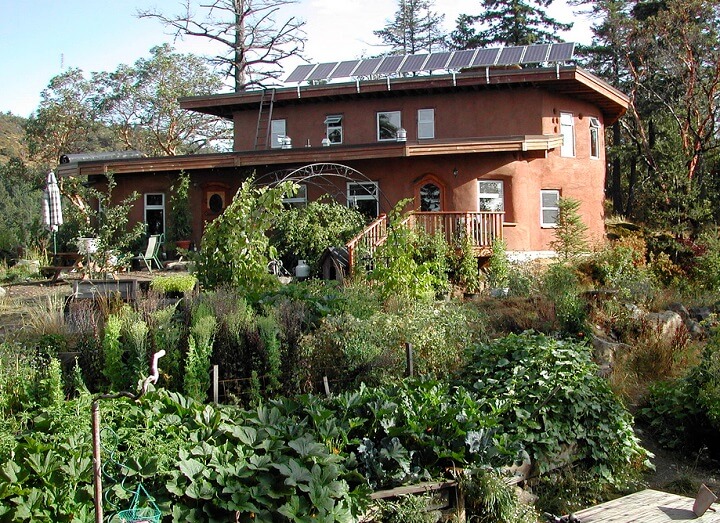 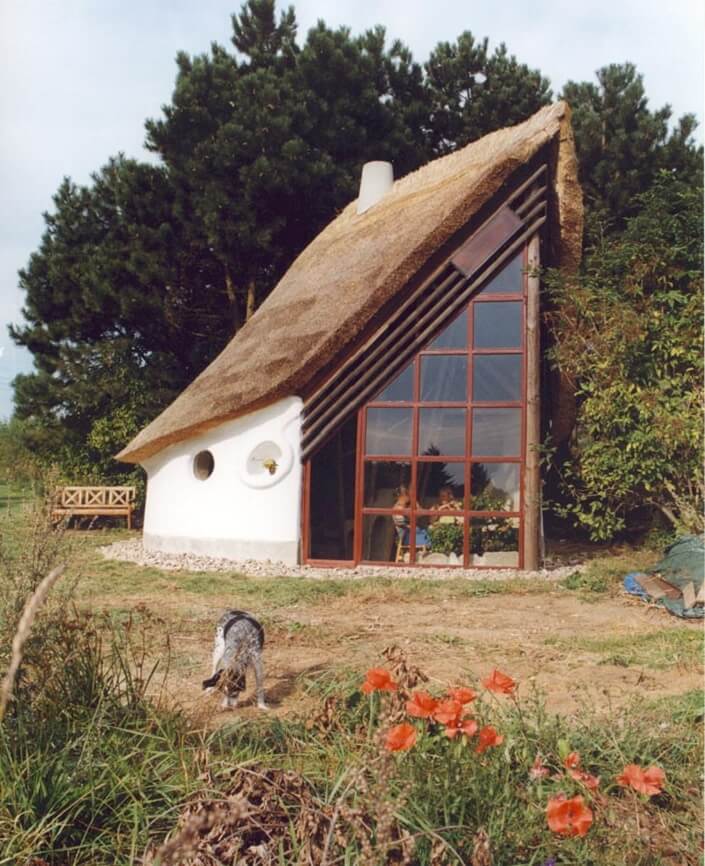 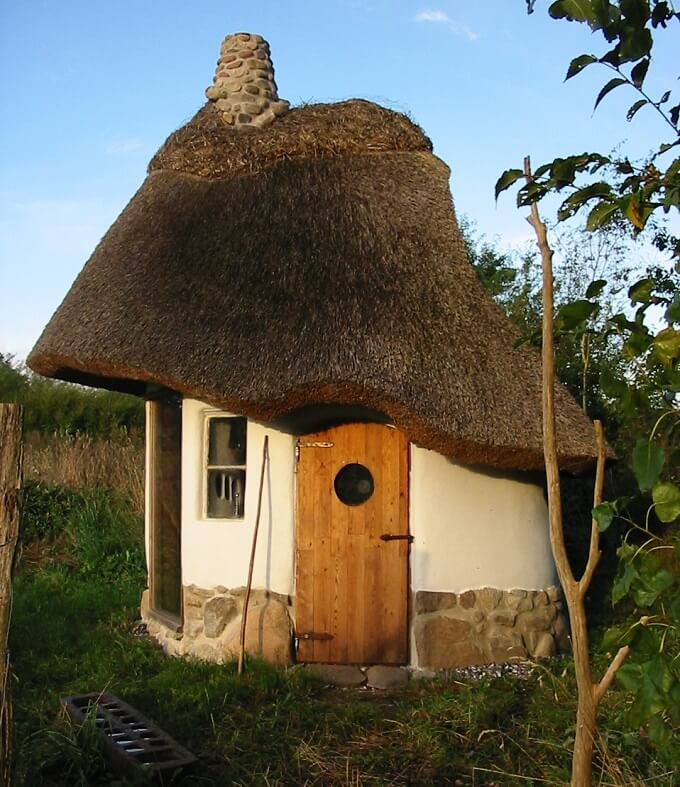 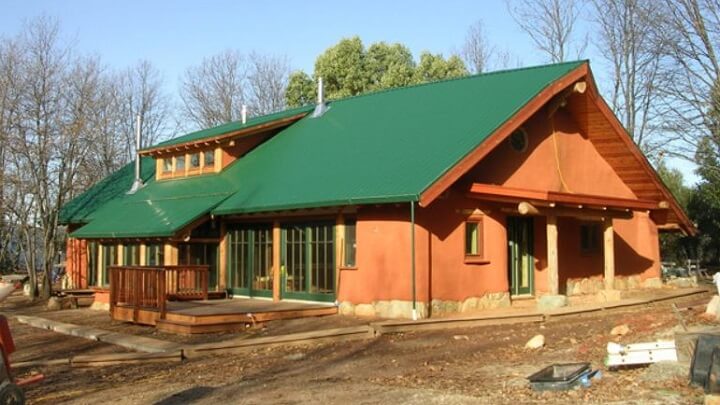 3000 sq ft cob home in California.
The foundation started out 22-26″ thick at bottom and tapers to 19″ at the top of the wall. Tractors were used to mix the cob and distribute it around the building site. By Rob Pollacek, californiacob.com 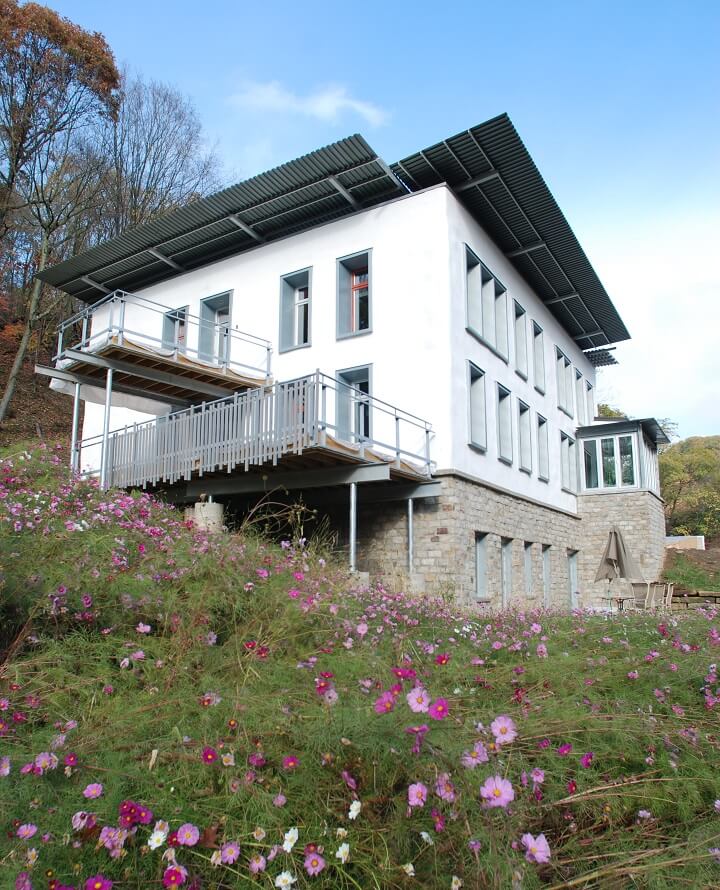 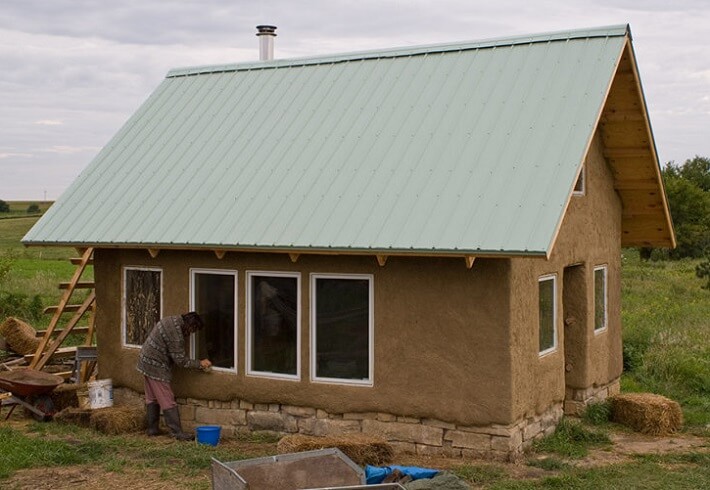 Cob home built for $7000. Half of that cost was in the roof and windows.
Built by Hap & Lin Mullenneaux, Fairfield, Iowa.
Later coated with a white lime plaster.
www.iowasource.com 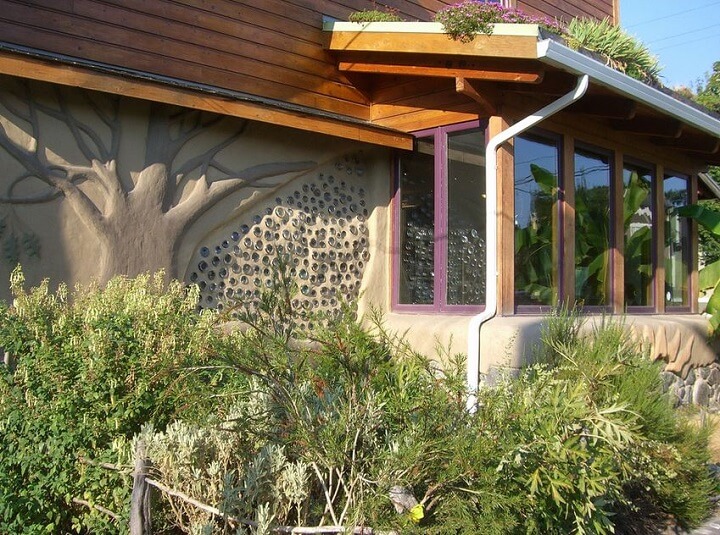 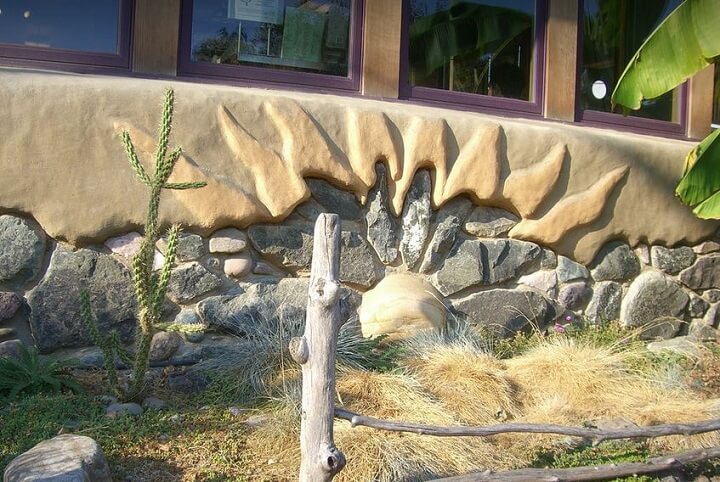 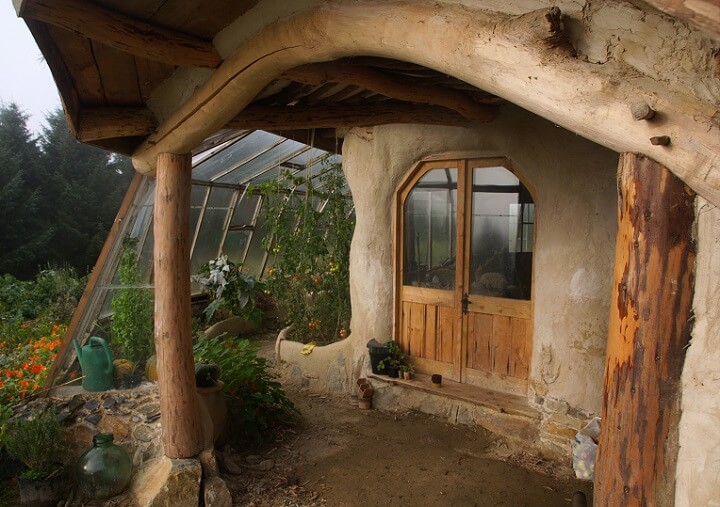 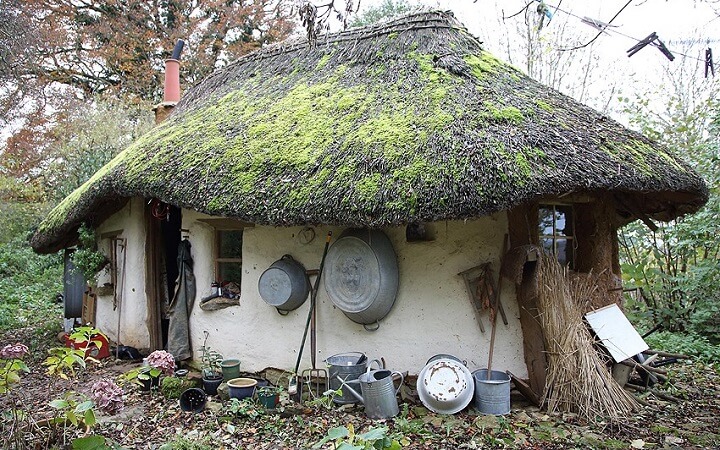 Cob Home in Oxfordshire, England. Built by Michael Buck for $250. using only mud and found materials (and no power tools). mirror.co.uk 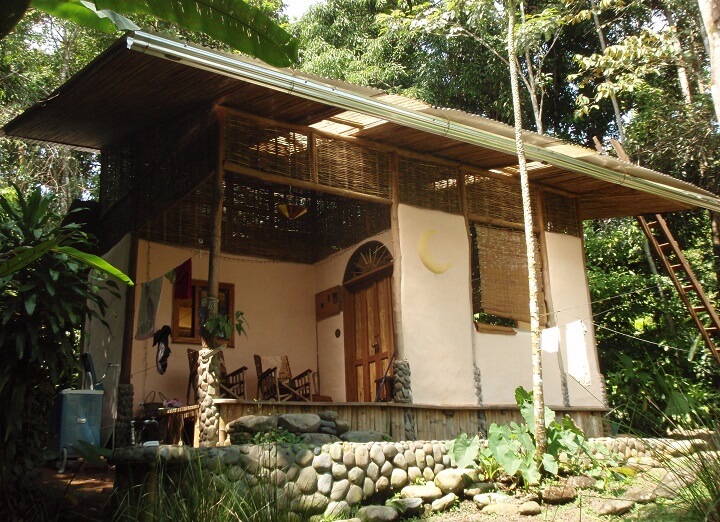 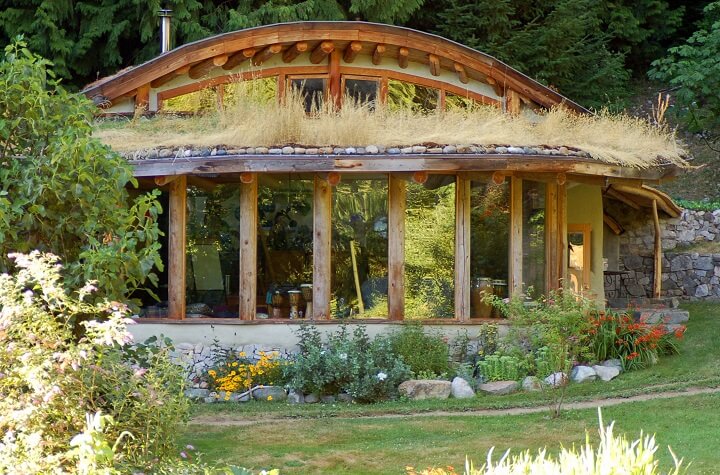 This organic cob home in Villa de Leyva, Colombia mimics the mountains. Cob construction is attractive to many, due to its sculptural possibilities. I do not know what breathable render they used to seal the roof. Whatever was used, it will surely need to be resealed every few years in a rainy environment. Via: overlandsphere.com