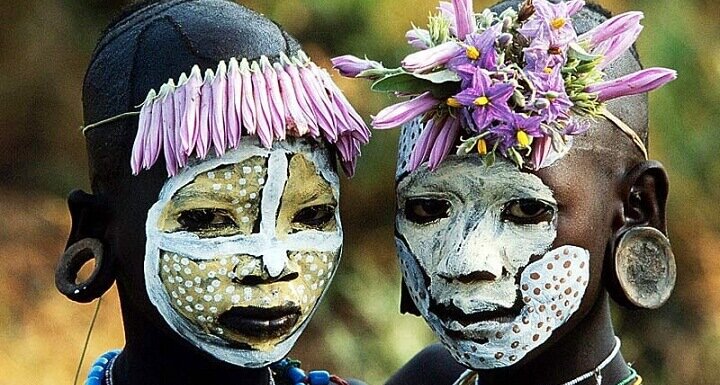 Imagine growing up without artwork on the walls, minimal paper and no pens but surrounded by bodies, nature, colored minerals and all sorts of animals with amazing designs.

The Ultimate Canvas: The Human Body

In the remote Omo valley in Africa, where the earliest known Homo sapiens remains have been found, indigenous tribes have been painting their bodies with pulverized minerals for millenia. In the Lower Omo Valley of southwest Ethiopia, eastern South Sudan and around Lake Turkana in north Kenya reside over 500,000 indigenous, tribal people. Many are agro-pastoralists who live close to the river or lake during the dry season but return to the grasslands when the rains come. The young men have the responsibility of grazing the cattle and they have long slathered on clay to prevent sunburn. Colors are used to designate position, for ritual, to ward off illness, to attract the opposite sex, to associate with family, a tribe or an animal, and of course just recently, to impress tourists.

Most all the following pictures were taken by Hans Silvester who over three years visited nine times with the Mursi and Surma Tribes of the Omo Valley. The Mursi have a long history of body painting, decorative scarring and piercing. Both men and woman pierce their ears for discs. Mursi woman used to commonly pierce and stretch their lower lip for a plate, but that tradition is fast fading. ©Hans Silvester. Boys usually paint one another. As there are few mirrors in the region, the affect is in other’s reactions. ©Hans Silvester. Mothers paint their babies and so starts a lifelong tradition. White face paint is thought to help protect a child from the supernatural. Red ochre, yellow sulfur, white kaolin, white limestone and grey ash are common minerals in the area. Certain clay deposits are sacred to the tribes. Most tribes do not profess a religion, but live a life in harmony with nature and the spirit world. And illness is not thought of as a separate bodily process but thought to stem from a disturbance in the relationship between persons and their social and natural environment. www.mursi.org “Body painting, as practiced here in East Africa, the cradle of humanity, seems to me to represent a way of life that dates from prehistory and once enabled humankind to overcome the hostility of nature. Art was then a means of survival.” Hans Silvester. The Surma tribe use flora and fauna as adornments. ©Hans Silvester. The desire to adorn our bodies is obviously a deep seated one. Clothes, impractical shoes, puffy hats, jewelry, makeup and hairstyles are westerner’s adornments. The natural pigments are extracted from the soils and clay of the area. With no architecture or crafts in their culture, body painting and piercing takes on greater meaning. Men have larger canvases to work with so often become more accomplished artists. Boys and men paint each other or themselves. White limestone also acts as an insecticide. Precursor to the wreath. ©Hans Silvester.

This youth’s ancestral bonds with nature are strong. As well as for decoration, clay also blocks the sun and keeps the insects from biting. Boys start tending the family’s herds at age eight and up. Time spent out in the grasslands is also used for self decoration. Feathers in headresses were once restricted to elders, warriors and hunters as they symbolized an impressive kill, such as a buffalo, but now they are just used as decoration. The temporal display is for others’ reactions. As civilization encroaches, thousands of years of tradition abruptly ends. Color is both a decoration and intimidation. Automatic weapons have made their way into the Omo Valley through the recent conflicts in Sudan. Now in the Omo Valley, every family owns an AK-47. Farming and cattle herding have long been the mainstays of tribes in the Ono Valley. Recently the establishment of national parks, hunting concessions, large plantations given to private companies by the government and droughts are causing the tribes to compete for resources and space. This has led to inter-group-conflict. Maybe there is hope.

These tribes who have never been part of the formal economy and who prefer to self-govern by their own customs and interpretations of land borders are at risk. A very controversial dam, the Gibe III is being constructed up river from their lands. The Gibe III will be the largest hydroelectric plant in Africa. The social and environmental impacts of the dam are expected to be severe. Many of the tribes depend on the annual flood cycle of the Omo River to sustain their crops. The dam will put an end to the annual flood as well as deplete water levels in the river and in Lake Turkana. On top of that, new, enormous sugar cane plantations are being plotted out on their lands, near the dam’s new irrigation channels, which will displace many tribes. As the tribes have no representation, the government will try to force the tribes into resettlement camps and although the government says the plantations will create jobs, it will be a sedantary and restricted lifestyle for a free people so used to living with nature.

As globalization takes over, much in our world that is unique is fast disappearing.

Tribes of the Omo Valley by Hans Silvester