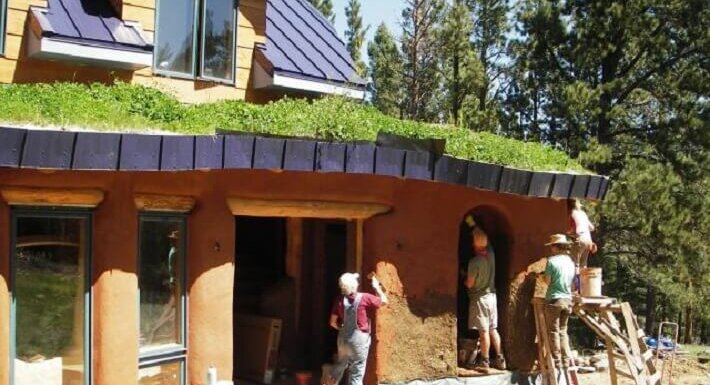 If you have a clay based subsoil (15-25% clay) you are in luck as your home’s raw material is below your feet. (You want the inorganic stuff down under the topsoil, no decomposing mulch and micro-organisms.) Mix your clay soil with some water, sand and straw. Mix with your feet, bare or booted, or with any number of mechanical mixers, or an oxen, or for a really large job, use a backhoe. See the ilovecob website for multiple mixing methods.

Before beginning a project it is always a good idea to make a few large practice blocks and allow them to dry thoroughly. These test blocks will show you the best ratio of sand and straw that will work best with your clay soil.

Remember that cob has excellent thermal properties and moderates temperatures, but eventually heat or cold reaches the other side of the wall. Cob’s R value, even with extra straw, has never tested better than 1 R per inch, usually it tests much lower. In cold or hot climates you should consider building certain walls in a non-conductive, insulating material such as straw bale. Actually many in cold climates are building double framed walls, cob on the inside with an insulated wall on the outside.[1] A cob wall stores the heat or cold, an insulating material blocks heat or cold from passing through a wall. 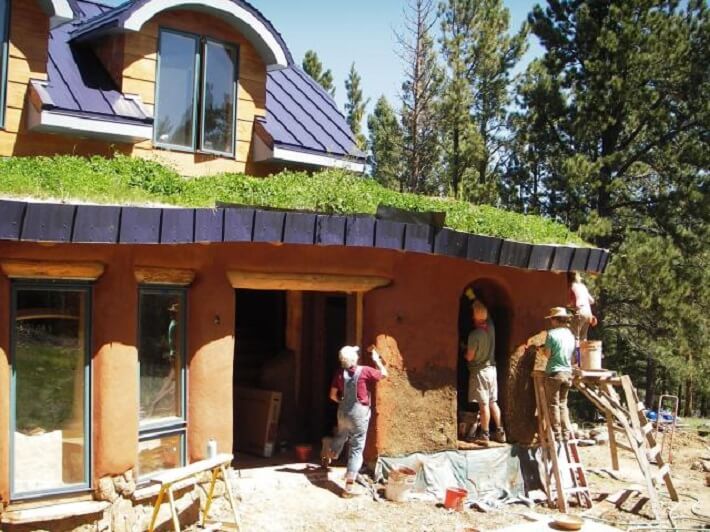 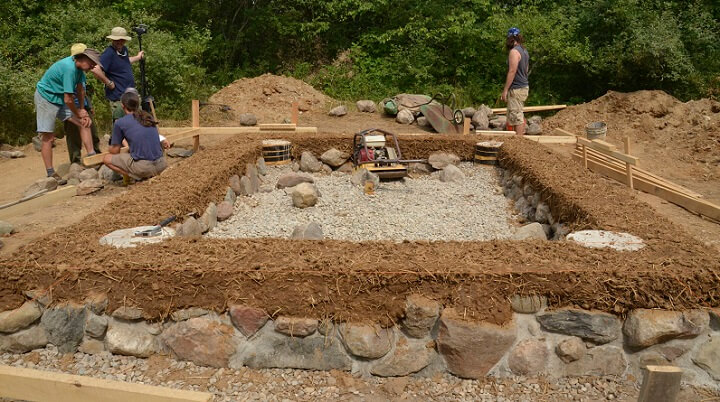 Cob bond beam in Michigan. Shovel the cob onto your foundation. Trample with feet. The walls of a cob home are generally 18 to 24 inches thick. The mass will hold heat in winter and the night’s coolness in summer. Photo taken by Eva Wimmer. naturalcottageproject.com 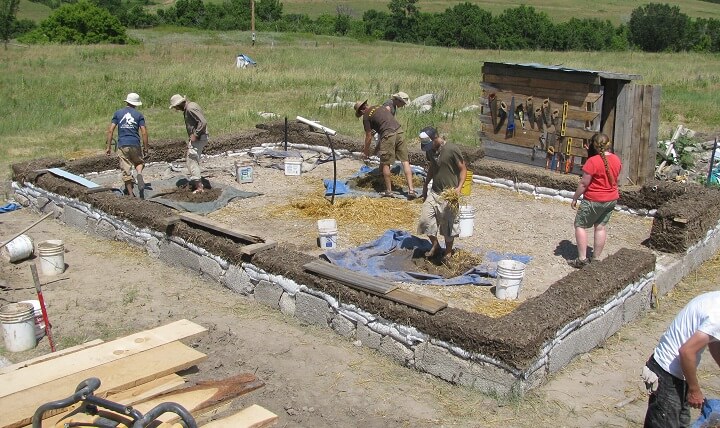 Mashing the cob with bare feet on tarps in South Dakota.
There are some earth bags above the rock foundation that the cob is sitting on, I assume they will be covered with cob.
Built by HouseAlive. 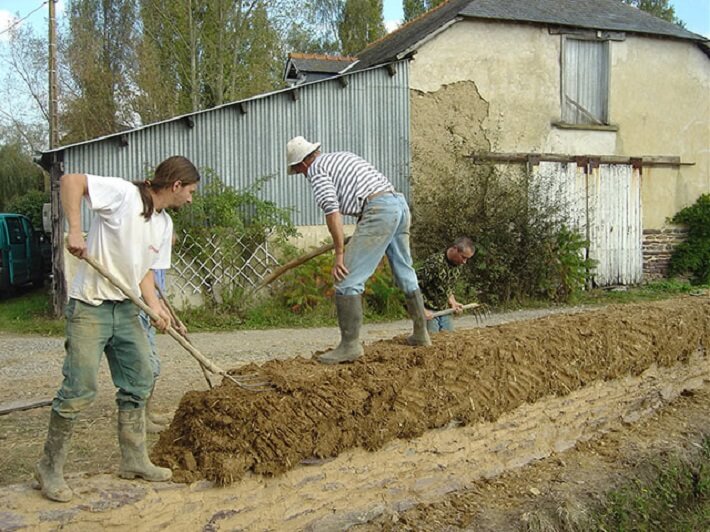 In France cob is known as bauge.
In France they use pitchforks (or cob picks) and wear rain boots!
www.tiez-breiz.bzh 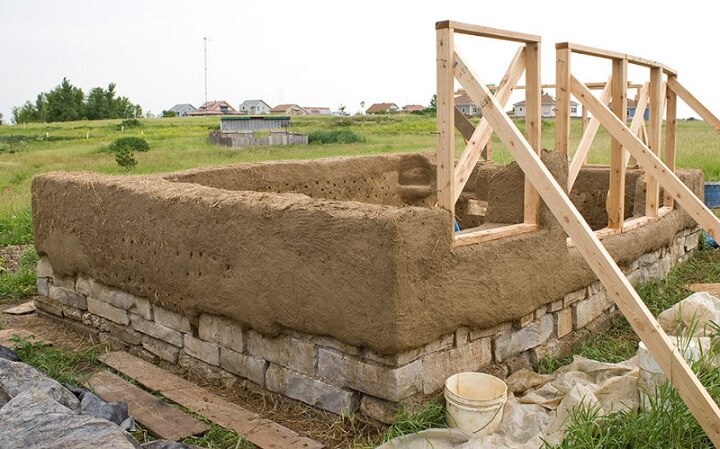 First course of cob drying on foundation.
A two foot high course might take one to three weeks to dry, you want your courses to dry a bit before new weight is applied to prevent the walls from buckling or slumping under their own weight. Leave the top rough so the next course adheres well. Originally found at pbase.com/hapm/ourhouse 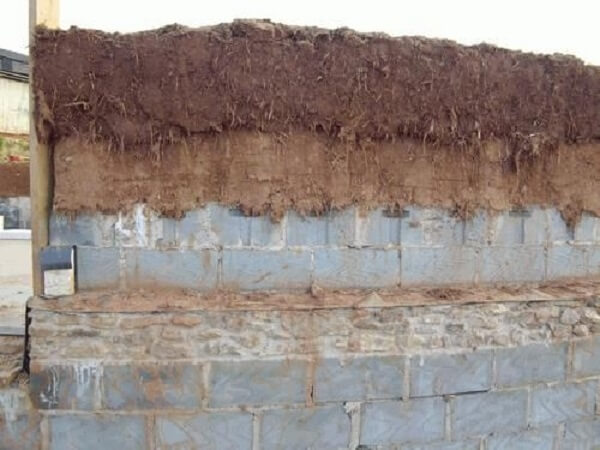 Second course or lift laid. Best to trim excess cob then to have to add cob to a wall. Best to have a tall foundation if you are in flood prone areas or going to backfill around the foundation. Home by Kevin McCabe, cob builder. East Devon, buildsomethingbeautiful.co.uk 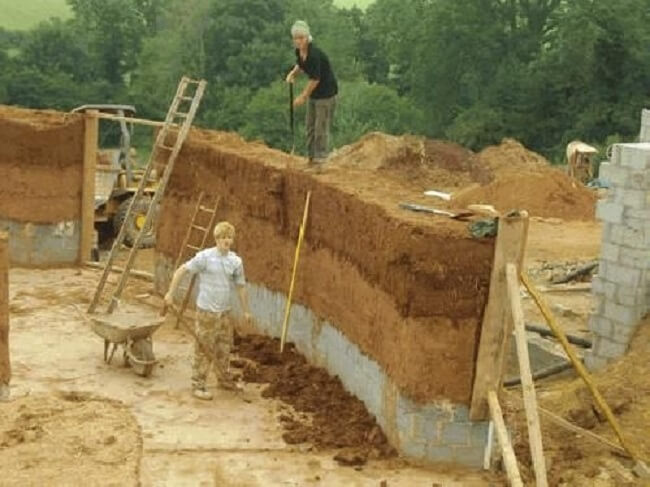 Trimming sides of second lift. Check with a level and trim with a spade, saw or machete. Best to have a tall foundation if you are in flood prone areas or going to backfill around the foundation. Home by Kevin McCabe, cob builder, courses also. East Devon, buildsomethingbeautiful.co.uk 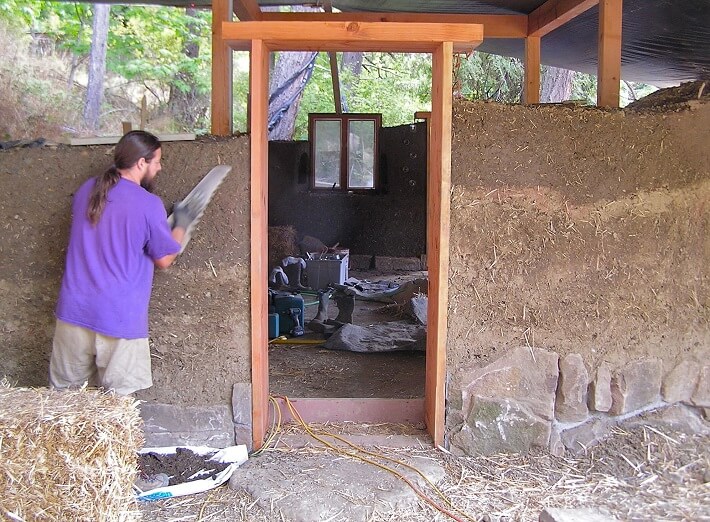 Cob wall construction- shaving/planing the wall with a saw. Keeping the walls plumb is a daily necessity. Image taken during the construction of Colin Hamilton’s workshop on Pender Island, British Columbia. thujawoodart.com 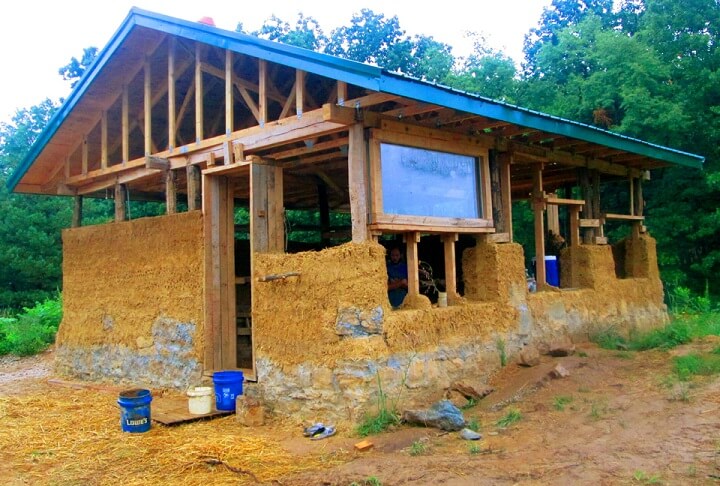 Mike and Andrea Reinhardt’s cob home under construction in Missouri. Clay is from the property. Local Amish framed and put up the roof. In rainy environments it is a good idea to put up a roof while constructing the walls. Total cost about $15,000. digitalburg.com 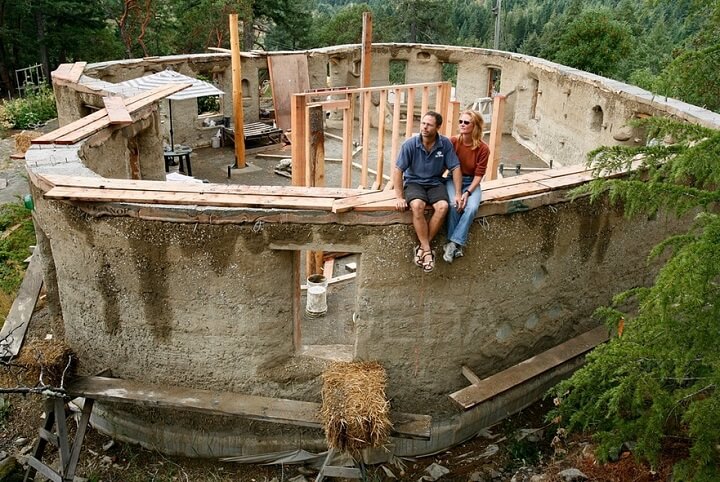 Cob alone has excellent thermal mass. But it is not the best at insulation, and eventually the heat or cold from one side will arrive at the other side. So in extreme climates pure cob should not be the only material you use. Strawbale and other lighter, non-conductive materials have more insulating value. Eco-Sense in Vancouver (Ann and Gord Baird) are mixing pumice into their cob. Their mix of 30% clay, 30% sand, 30% pumice and lots of straw is showing good test results. Originally found at islandnet.com/~anngord/builders.html#slic 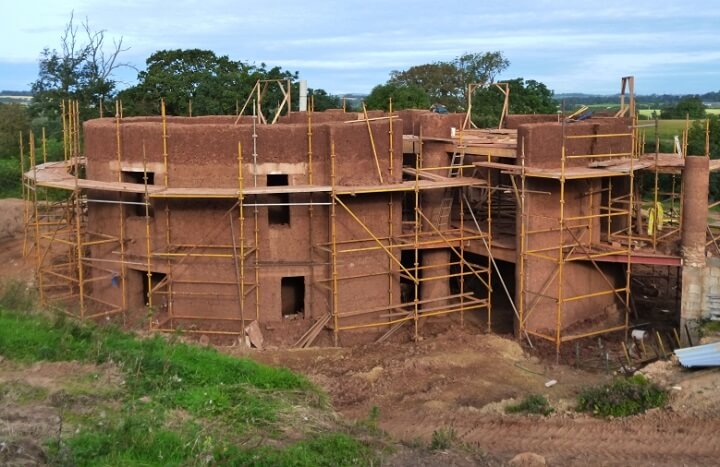 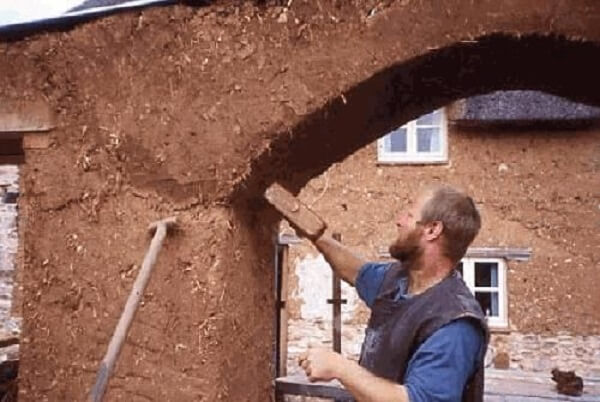 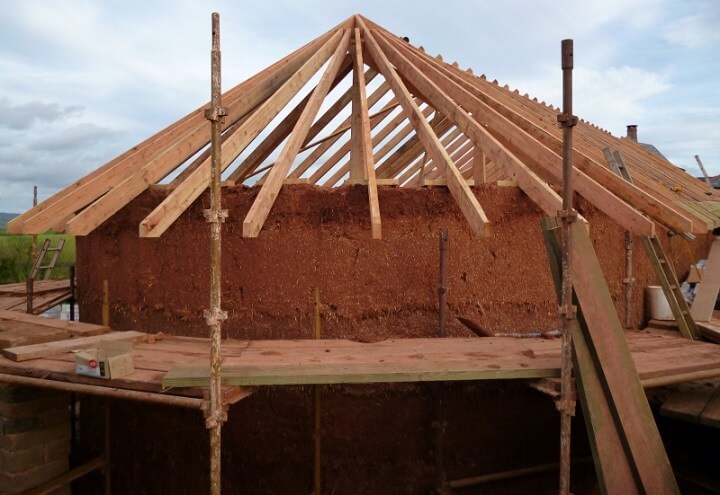 Roof rafters rest on cob walls. Home by Kevin McCabe, cob builder. The roof will be covered in living wildflowers. An external finish (render) should not be applied until the cob has completely dried. buildsomethingbeautiful.co.uk 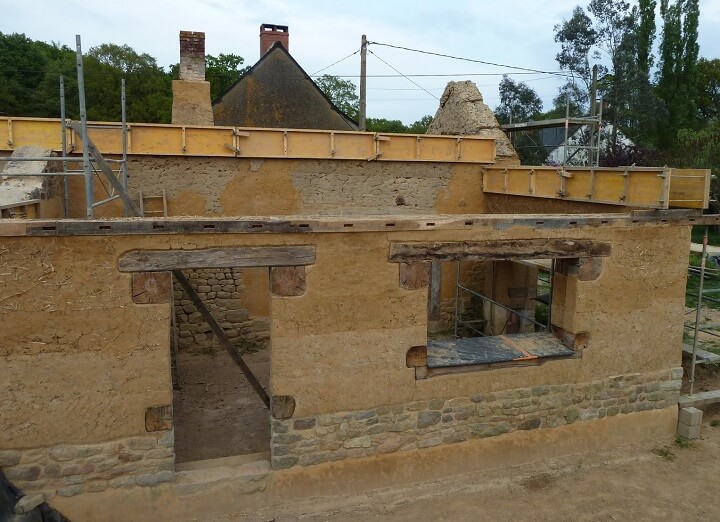 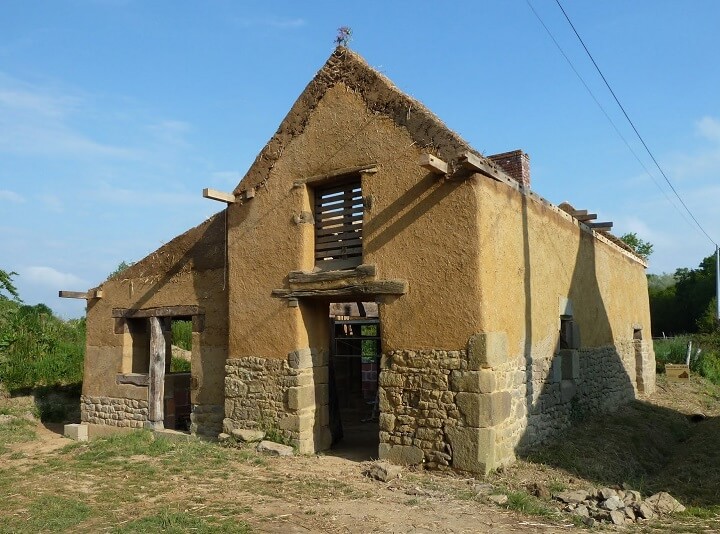 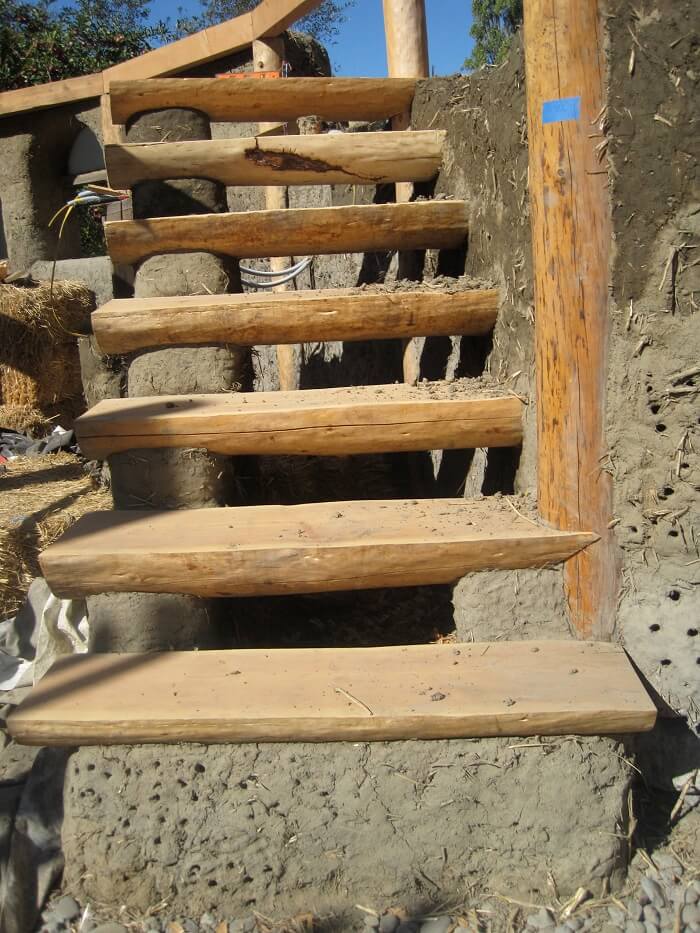 Cob home staircase under construction in Northern California.
Note the round wood poles and beams will support a second story.
By Kristen at muddyhands.typepad.com/cob/cob-house/ 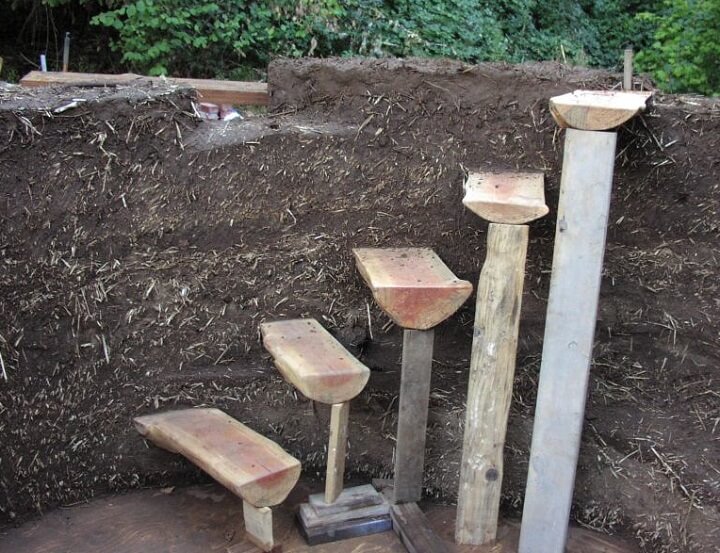 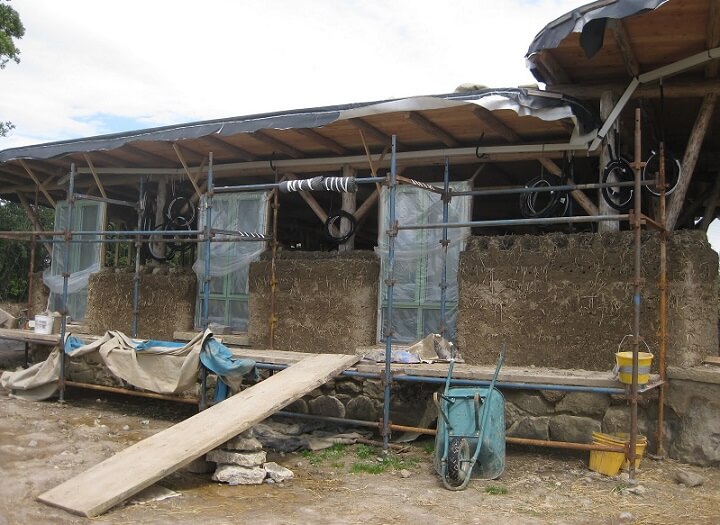 If you use wooden supports for your roof (which many local building codes require) and build the roof before the walls, you do not have to worry about your new walls getting too wet during rainy weather. mudbandits.blogspot.com 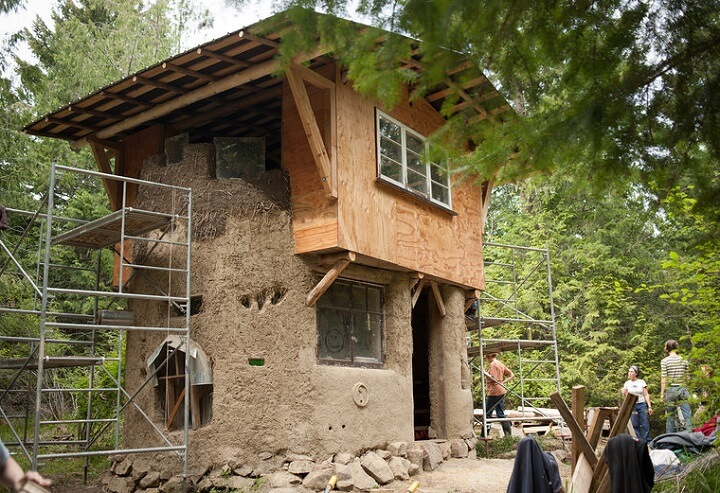 Mud Girls Natural Building Collective.
Cob workshops – Salt Spring and Vancouver Island.
You do not want the foundation to attract moisture, so keep plantings away from the foundation.
Originally found at mudgirls.wordpress.com 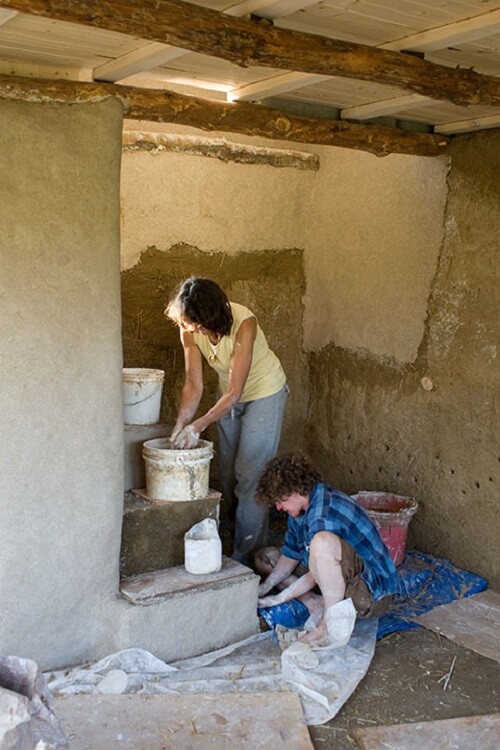 Cob in Iowa. Lin Mullenneaux and her son plaster the circular stair. Their plaster recipe is made from kaolin clay, sifted sand, straw, wheat paste, and cattail fiber which was collected earlier in the day. Originally found at pbase.com/hapm/ourhouse 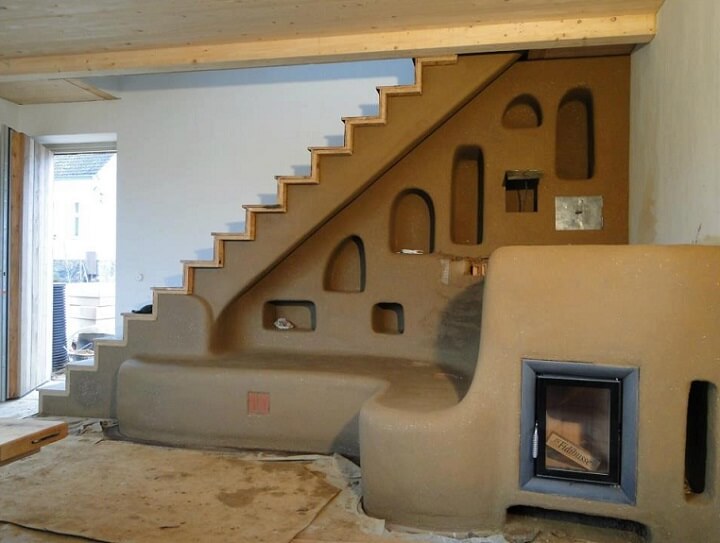 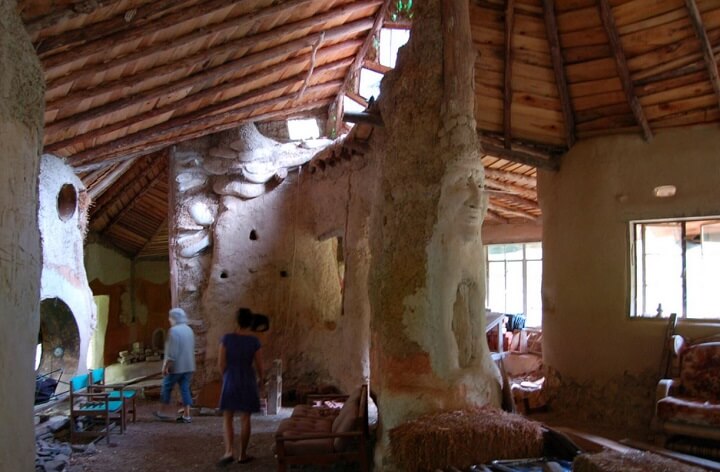 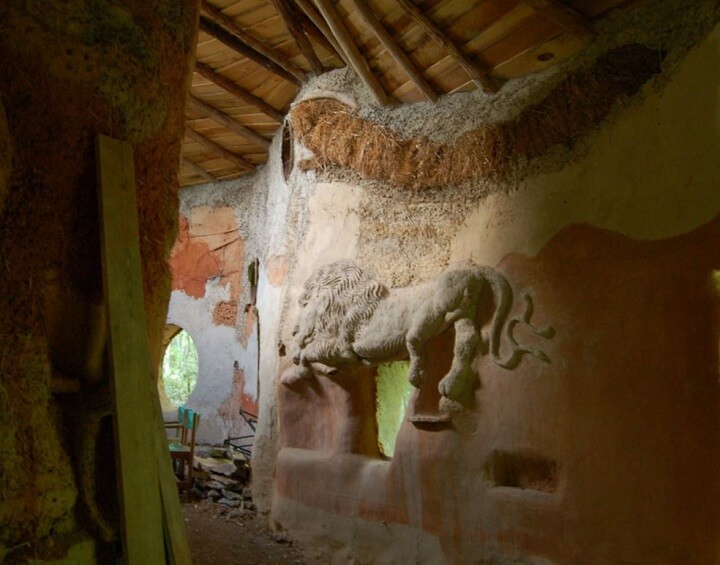 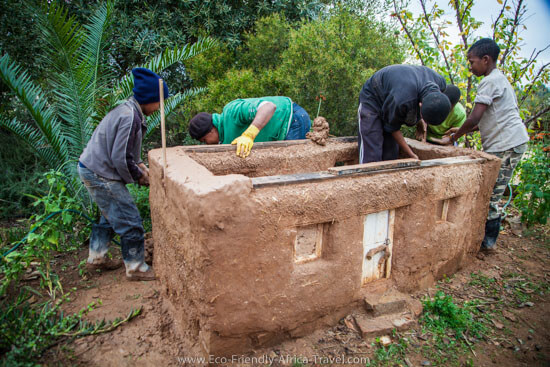 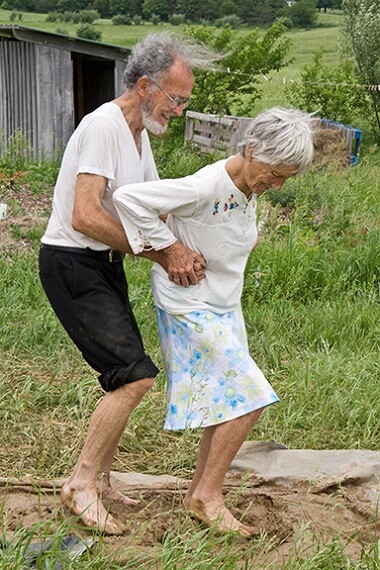 Dorothy Beal and her husband assist in the construction of their son’s home in Iowa. Originally found at pbase.com/hapm/ourhouse

“The solidity of cob walls depends much upon their not being hurried in the process of making them, for if hurried, the walls will surely be crippled, that is, they will swag or swerve from the perpendicular. In Devonshire the builders of cob-wall houses like to begin their work when the birds begin to build their nests, in order that there may be time to cover in the shell of the building before winter. The outer walls are plastered the following spring. Should the work be overtaken by winter before the roof is on, it is usual to put a temporary covering of thatch upon the walls, to protect them from the frost.” An Old Authority, gutenberg.org

The Best Books On Cob Construction

How To Start Your Cob Building: