Most of the transmission signals are lost in space, as the signals are sent out 360 degrees from the cell’s antenna. Only a small percentage hit the tower. 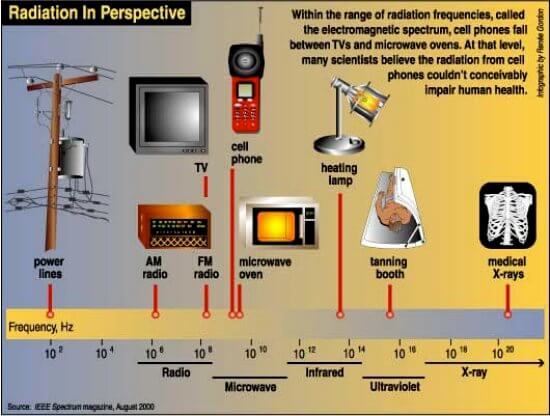 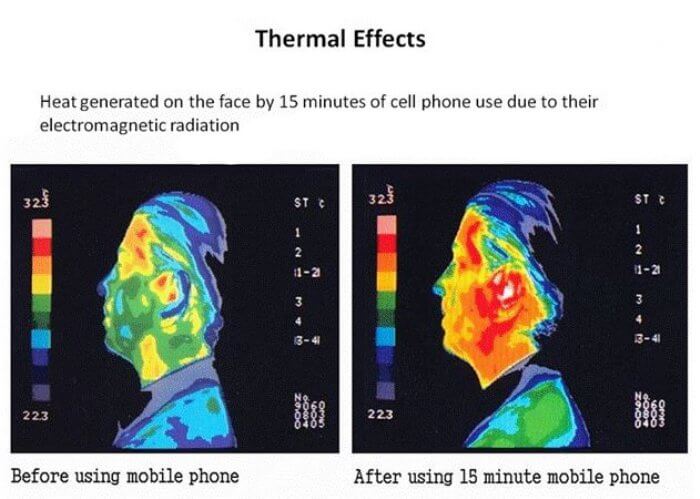 [library.thinkquest.org], www.fisherclinic.com, www.ncbi.nlm.nih.gov
The radiation and thermal effects you are exposed to, are directly related to the time you spend talking on your cell. When you know the conversation will be a long one, use a wired phone.

Dr Om Gandhi (University of Utah) shows how radiation penetrates the skull of an adult (25%), 10 year old (50%) and a 5 year old (75%). The younger the child the deeper the penetration due to the fact that their skulls are thinner and still developing. Bone marrow in a child’s skull absorbs 10 times more microwave radiation than does an adult.www.environmentalhealthtrust.org

How To Reduce Your Exposure To Cell Phone Radiation 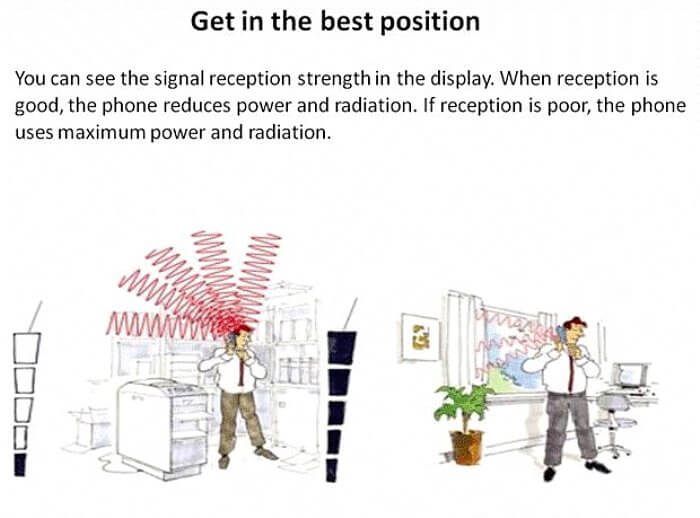 Radiation is strongest when the signal is very weak. In weak signal areas, the cell phone cranks up its power to connect to the base station. Keep this in mind in buildings as well as when traveling — as towers come in and out of range, you are being exposed to larger amounts of radiation. Also, if you are in a rural location, far from a cell tower, and your cell is constantly trying to connect, reconsider using your cell. 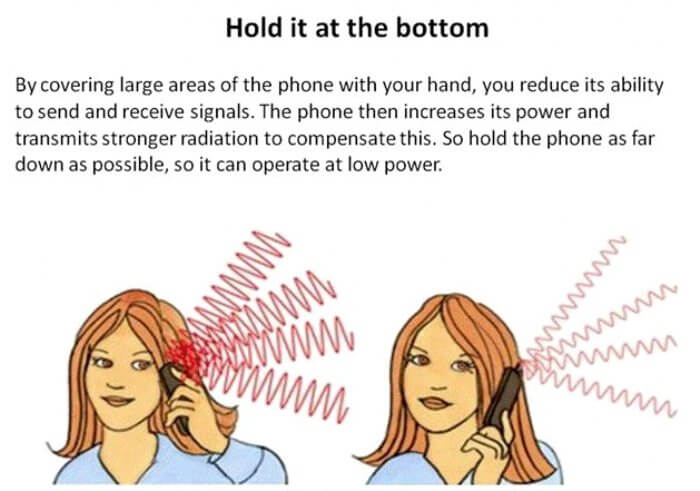 Your cell phone is a tiny transceiver: a combination transmitter and receiver. The radiation is strongest in transmition mode. Tilting the phone away from your ear as you speak will help reduce radiation zapping your head when the cell is transmitting to the tower.

Or —
Always hold the phone 2 inches from your ear and you will dramatically reduce the amount of radiation penetrating into your head.

Or —
Keep the phone at least a foot away from your body and use the speakerphone setting.

Or —
Use a headset. A wired headset may still transmit radiation through the wire – but it is at a reduced level. Best, is to purchase a ferrite bead, which is a clip you put on the wire of a headset. The bead absorbs the radiation and none reaches your head. You can find numerous ferrite beads on your computer cords, on the side they plug into the computer, the ferret beads are integrated into the cord and reduce static. Ferret beads are available at stores or online ($15 or less). Hollow tube earpieces reduce most radiation as well, but I have yet to find one that works well.

Or —
Use a Bluetooth earpiece, which still emits radiation, but some models reduce the radiation by 100 times. Some, emit much more radiation. Check the radiation levels on each Bluetooth carefully. Keeping in mind that although the radiation is much lower, the source is in your ear, and therefore really close to your brain. Due to the constant low radiation of the blue tooth, one should take it out of the ear when not in use.

The FCC has set a SAR limit of 1.6 W/kg, averaged over a volume of 1 gram of tissue, for the head. The FCC ID number usually is shown somewhere on the case of the phone. Use that number and the FCC ID Search Form to learn more about your cell phone’s SAR limits.

CNET and the Environmental Working Group, have produced charts that show the amount of radiation produced by popular phones. 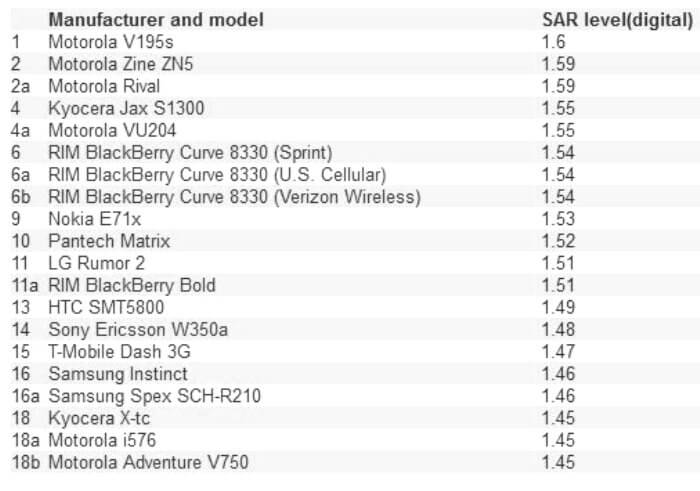 Be wary of radiation shields that claim to limit exposure to radiation. They may reduce the connection quality and therefore force the phone to transmit at higher power.

In May, 2011 the International Agency for Research on Cancer (IARC) and the World Health Organization (WHO) reclassified radio frequency electromagnetic fields as a Class 2B carcinogen (possibly carcinogen to humans).

Magda Havas demonstrates how WiFi connects your laptop, iPhone and iPad to the internet via microwave radiation. You will also learn how WiFi base stations, portable phones and baby monitors constantly radiate microwave radiation. The Swiss Government feels that all of these devices have the potential to do great harm if used incorrectly and warn their citizens.

Most schools in North America are opting for a WiFI wireless local area network (WLAN) that allows computers and laptops to be connected to each other without wires. But the Swiss government prefers — LAN — wired networks that do not emit microwave radiation. For example, on their public health website, they specifically warn about the dangers of WiFi:

“Only switch your WLAN (WiFi) on when you need it. With laptops, in particular, it is a good idea to switch the WLAN (WiFi) off as otherwise the device will repeatedly try to connect to a network, leading to unnecessary radiation…and caution should be exercised primarily when using devices held close to the body, such as laptops, PDAs and Internet telephones.” www.magdahavas.com

Dr Magda Havas an expert on electromagnetic fields (EMF) that originate from our use of electricity and wireless communication technologies.
www.magdahavas.com