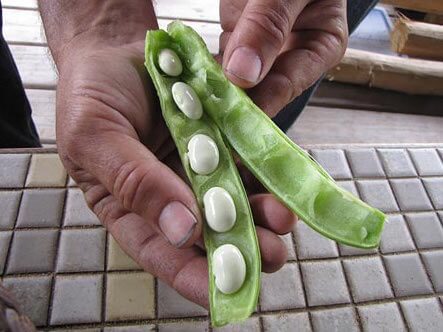 Homesteading expert Jackie Clay achieved a minor miracle in her garden this summer—growing pole beans from a 1,500-year-old seed. Obviously your local garden store doesn’t stock such a thing. Jackie says she got her hands on it when she was living in New Mexico. She emailed me with the full story:

When we lived in New Mexico, we were given a few seeds a neighboring rancher in Folsom, NM found in a sealed clay pot in an old Indian ruin in his pasture. The pot and contents were carbon dated back 1,500 years! I increased my store of these seeds, stunned by their productivity and the size of the beans. They are the size of the end of a man’s thumb! These beans are similar to a bean called 45/90 and we think they may be the same bean, grown by generations of a Missouri family. We love these beans we call Folsom Indian Ruin because of their initial “home”.

That carbon date of 1,500 years ago would put the seed’s birthday around 500 A.D., which is significant. That’s right about the time Pueblo people, the indigenous culture of New Mexico and Arizona, were transitioning from their hunter-gatherer lifestyle to full-time agriculture.

The seeds Jackie’s neighbor found may have been among the first grown in the area. Eventually the Pueblo became very successful farmers, using a mix of sophisticated techniques.

The Pueblo built extensive canals for irrigation—more than 19 miles of them near modern-day Tucson. They terraced land for farming, often on the sides of cliffs. To prevent erosion and help their farmland retain heat, they covered their maize fields in lithic mulch—that’s rocks and pebbles. And sporadic floodplain cultivation made for quick harvests in areas where predictable flooding washed rich soil over the land—the same technique used by the Egyptians along the Nile.

As their farming sophistication grew, the Pueblo population grew as well. By around 1000 A.D. the Pueblo were building massive communities and temples like the ones you can visit at Chaco Culture National Historic Park, Casa Grande, or the misnamed Aztec Ruins National Monument.

The bean Jackie grew is very likely related to Phaseolus vulgaris, the mother species of most of the beans we know today. Originally domesticated in South America 8,ooo years ago, then separately in Central America 1,000 years later, America’s first farmers grew this adaptable plant all over the continent by the time Columbus arrived, in dozens of different varieties.

Columbus gathered some from fields in the Caribbean islands and brought them back to Europe. Old world farmers saw what their new world counterparts already knew—that Phaseolus vulgaris is hardy, easy to grow, and very nutritious.

The plant spread rapidly to Europe and Asia. Old world farmers created their own varieties of this New World plant. The snap peas in your Chinese stir fry, the green beans in your Nicoise salad, the black beans in your taco—all, like Jackie’s pole beans, are descendants of these first domesticated beans.

Today’s homesteaders can buy both old and new world varieties, thanks to the heirloom seeds movement. Baker Creek Heirloom Seeds sells 73 different varieties of heirloom beans, from the Dragon Tongue Bush Bean to the Zuni Gold.

Jackie, who writes an advice column for Backwoods Home Magazine and also runs an heirloom seeds business, calls the variety she grew the Folsom Indian Ruin bean. “I’ve NEVER had so many blossoms on a bean in my life,” Jackie wrote. “No wonder those ancient Native Americans took the trouble to store them so well.”