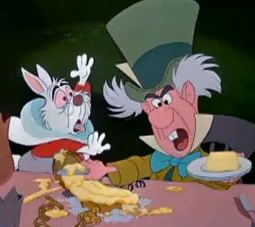 Illustration by Arthur Rackham. Alice was feeling bored while sitting on the riverbank with her sister, when she noticed a talking, clothed White Rabbit with a pocket watch run past. She follows it down a rabbit hole. Alice’s Adventures in Wonderland (commonly shortened to Alice in Wonderland) is an 1865 novel written by English author Charles Lutwidge Dodgson under the pseudonym Lewis Carroll. It tells of a girl named Alice who falls down a rabbit hole into a fantasy world (Wonderland) occupied by peculiar, anthropomorphic creatures.  www.bugtown.com The Pool of Tears. Alice swims through her own tears and meets a Mouse, who is swimming as well. She tries to make small talk with him in elementary French (thinking he may be a French mouse) but her opening line “Ou est ma chatte?” offends the mouse. www.bugtown.com Advice from a Caterpillar. Alice comes upon a mushroom and sitting on it is a blue Caterpillar smoking a hookah. The Caterpillar questions Alice and she admits to her current identity crisis, compounded by her inability to remember a poem. Before crawling away, the caterpillar tells Alice that one side of the mushroom will make her taller and the other side will make her shorter. She breaks off two pieces from the mushroom. One side makes her shrink smaller than ever, while another causes her neck to grow high into the trees, where a pigeon mistakes her for a serpent. With some effort, Alice brings herself back to her usual height. She stumbles upon a small estate and uses the mushroom to reach a more appropriate height. www.bugtown.com A Mad Tea-Party: Alice becomes a guest at a “mad” tea party along with the March Hare, the Hatter, and a very tired Dormouse who falls asleep frequently, only to be violently woken up moments later by the March Hare and the Hatter. The characters give Alice many riddles and stories, including the famous ‘Why is a raven like a writing desk?’. The Hatter reveals that they have tea all day because Time has punished him by eternally standing still at 6 pm (tea time). Alice becomes insulted and tired of being bombarded with riddles and she leaves claiming that it was the stupidest tea party that she had ever been to.

The Queen of Hearts introduces Alice to the Gryphon, who takes her to the Mock Turtle. The Mock Turtle is very sad, even though he has no sorrow. He tries to tell his story about how he used to be a real turtle in school, which The Gryphon interrupts so they can play a game. The Hare and the Tortoise. A Hare was one day making fun of a Tortoise for being so slow upon his feet. “Wait a bit,” said the Tortoise; “I’ll run a race with you, and I’ll wager that I win.” “Oh, well,” replied the Hare, who was much amused at the idea, “let’s try and see”; and it was soon agreed that the fox should set a course for them, and be the judge. When the time came both started off together, but the Hare was soon so far ahead that he thought he might as well have a rest: so down he lay and fell fast asleep. Meanwhile the Tortoise kept plodding on, and in time reached the goal. At last the Hare woke up with a start, and dashed on at his fastest, but only to find that the Tortoise had already won the race. Moral: Slow and steady wins the race. An Aesop’s Fable. Illustration by Arthur Rackham. www.gutenberg.org The Quack Frog. Once upon a time a Frog came forth from his home in the marshes and proclaimed to all the world that he was a learned physician, skilled in drugs and able to cure all diseases. Among the crowd was a Fox, who called out, “You a doctor! Why, how can you set up to heal others when you cannot even cure your own lame legs and blotched and wrinkled skin?” Moral: Physician, heal thyself. An Aesop’s Fable. Illustration by Arthur Rackham. www.gutenberg.org The Story of the Three Bears, illustrated by Arthur Rackham. Project Gutenburg, en.wikipedia.org Arthur Rackham was born in 1867, in London, England. He studied at the Lambeth School of Art. He illustrated many books including Rip van Winkle (1905), Alice in Wonderland (1907), A Midsummer Night’s Dream by William Shakespeare (1908), Fairy Tales of the Brothers Grimm (1909), Cinderella (1919), Sleeping Beauty (1920) and many other children’s books and classics throughout the years until his death in 1939. His last work, for The Wind in the Willows, was published posthumously. He won gold medals at Milan (1906) and Barcelona (1911), and his books and original art are now collected in many countries throughout the world. Many more Rackham images can be found here: www.artpassions.net

How Arthur Rackham And Hugh Comstock Are Linked

Hugh Comstock was very familiar with Rackham’s illustrations and when his wife asked him to build her a showroom for her handmade rag dolls “Otsy-Totsys”, the first time builder looked to Arthur Rackman’s illustrations and built his wife a Rackham-inspired cottage, called Hansel. Hugh found his life’s calling in the building of the cottage and proceeded to build twenty one more, all of which can still be found in Carmel today. Comstock was certainly not the only one influenced by Rackham’s drawings, Walt Disney told his illustrator’s to study Rackham’s style before illustrating Disney’s first full length animation, ‘Snow White‘.* And Peter Jackson’s ‘Ent’s were most certainly derived from Rackham’s frequent depictions of Ent-like beings. Hugh Comstock’s Tuck Box built as Hugh’s office or as a home in 1928, but became a restaurant in the early 1930s and has remained one ever since. Photo by Linda Hartong. talesfromcarmel.com