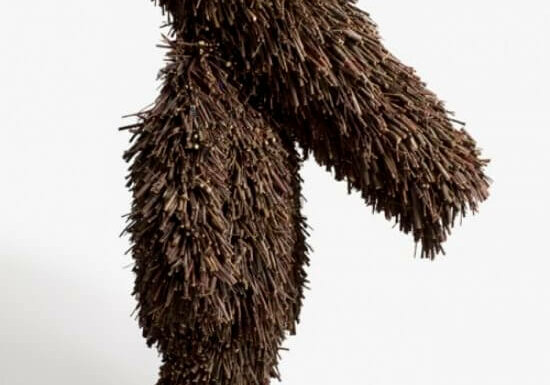 Twigs, one of Nick Cave’s first Sound Suits, he says they’re “full body suits constructed of materials that rattle with movement, like a coat of armor, (they) embellish the body while protecting the wearer from outside culture.” Cave constructed his first suit after watching the Rodney King incident. www.facebook.com

Each twig is drilled and sewn onto a wearable/movable frame. When Cave realized the suits emitted sound as they move – he called them sound suits. And he dreamed of assembling multiple, to hear the combined sounds as they move. Nick Cave has a Master’s Degree in textile design and was an Alvin Ailey dancer. www.facebook.com

Hat and Handbag Reuse. Cave was one of eight brothers and hand-me-downs throughout childhood were familiar, which made reuse or reinventing easy for him. www.facebook.com

Cousin It Sound Suit. “You’re forced to come to the work without judgment. That’s the bottom line. We live in a world that wants to categorize and put things in a particular place.”

Silk, plastic and fabric flowers with sequins and embroidery. www.fromtheglobalvillage.com

Nick Cave was born in Fulton, Missouri, in 1959. He earned a BFA from the Kansas City Art Institute in 1982 and an MFA from Cranbrook Academy of Art (fiber arts program). Currently, Cave is assistant professor and chair in the Department of Fashion Design at the School of the Art Institute of Chicago. He also designed clothes for a decade and is a former Alvin Ailey dancer. Nick has an upcoming show at Jack Shainman Gallery, NY. Sept 8 – Oct 8, 2011. www.jackshainman.com In collaboration with Mary Boone Gallery. www.maryboonegallery.com

Cave has recently been included in group exhibitions at institutions including the Museum of Contemporary Art, Chicago, 2011; Göteborgs Konsthall, Sweden, 2010; and Kunstmuseum Wolfsburg, Germany, 2011. He is also included in 30 Americans: Rubell Family Collection, which opened in October 2011 at the Corcoran Art Gallery in Washington, DC, and was included in the Prospect.2 Biennial.