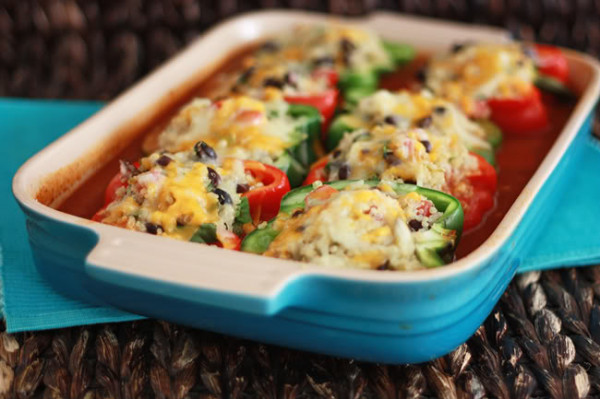 In late August, I discovered that barley is a tasty alternative for brown rice. Nutty, crunchy, and as easy to cook as rice, I also learned that it’s much better for me. I wrote about the nutritional facts comparing brown rice and barley and received an awesome e-mail from my grateful sister who said she seldom cooks rice because it doesn’t have much nutritional value. She was happy to have a healthy alternative. (My older sister is pretty smart. Who knew?) We’re now sharing barley stories.

After that menu-changing discovery, I saw a cooking show host praising the virtues of quinoa — touting its high protein level, which makes it a great staple for vegans and vegetarians. I’ve eaten quinoa a time or two. I kinda’ liked it. So after the ultimate smackdown between barley and brown rice, I had to check it out. I cooked with it and did a little research. Here’s what I found.

I learned it’s a species of goosefoot — a grain-like crop with edible seeds. The great oracle, Wikipedia, calls it a “pseudocereal” as opposed to a true cereal or grain. Apparently, it’s closely related to species like beets, spinach, and tumbleweeds — which is totally bizarre because it comes in the form of tiny balls like those that fill foam pillows.

Quinoa Is Healthy, but Barley Holds Its Own

The nutritional facts show that while barley kicks butt in fiber content, quinoa takes the prize for protein — but only by a smidge. A serving of quinoa provides six grams of protein, compared to barley’s five and brown rice’s three. And quinoa’s three grams of dietary fiber shrink like lilies when compared to barley’s eight. I’m not nickel-and-diming when it comes to nutrition — suffice it to say that any side dish healthier than rice, potatoes, or pasta is welcome on my plate, particularly when it tastes as good as barley or quinoa. 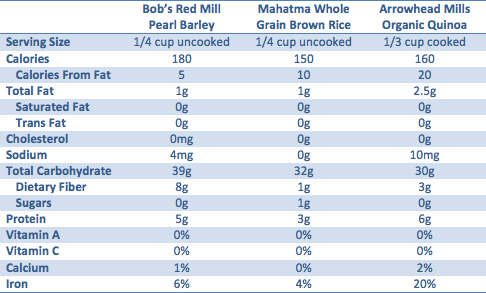 Quinoa Is Quick, Easy To Cook, And Lip-Smackin’ Good

Mix a cup of quinoa with two cups water, bring to a boil, and simmer for 10 to 15 minutes or until water is absorbed. Brown rice and barley each take 45 minutes to an hour to get ready for the party, so if you’re in a hurry, quinoa is a great date. It can also hold its own as part of a main dish, which is how I enjoyed it the other night. I found a recipe via Pinterest for quinoa and black bean stuffed peppers — it combined quinoa, black beans, tomatoes, cilantro, tomato sauce, chipotle, green chiles, and cheese to create a flavorful stuffing for bell peppers sitting in a puddle of homemade enchilada sauce. (You can buy the sauce, but it was incredibly easy to make and quite sassy!)

Quinoa also glows as the star in quinoa salads, which are simple, flavorful, and just plain good for you. And there is a morning oatmeal recipe I’m eager to try that partners quinoa with oats, rice, apples, and coconut milk. Might be the breakfast of champions for me.

Give It A Try!

Next time you’re at the market, pick up a bag of this grain-like goodie. Try it first as a simple side dish, tossed with some butter or olive oil. Then get more adventurous. Use it in a chilled salad. Try the stuffed pepper recipe. And let us know what you think and what other ways you incorporate quinoa into your menu.