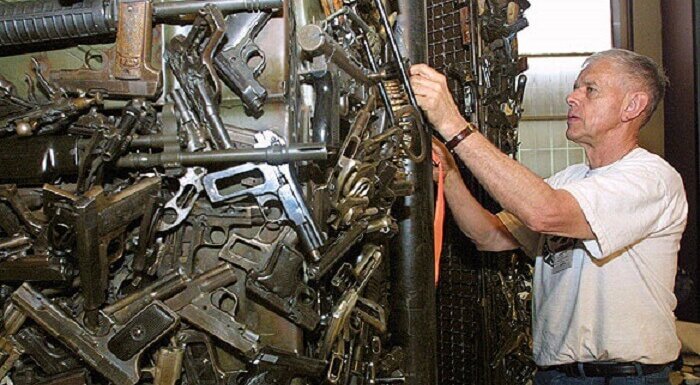 In Arizona the governor signed into law an order banning confiscated or surrendered guns from being destroyed. One solution: turn them into art. ‘Gun Sculpture’ by Canadian artists Sandra Bromley and Wallis Kendal makes the secret life of weapons visible. Standing at 8′ x 12′ x 8′, and weighing 5 tons, the rectangular structure is a monstrous aggregate of over 7000 deactivated weapons, including handguns, AK47s, rifles, landmines, and ammunition. www.gunsculpture.com Gun Sculpture can be entered and evokes the constriction of a prison cell, its interior is lined with panels of steel mesh, while the floor is a mosaic of flattened weapons set into concrete tiles. www.gunsculpture.com Cathedral. Artist Al Farrow combined religious imagery with guns, ammunition and bombs in his series, ‘Reliquaries’. The sculptures are an ironic play on the medieval cult of the relic as well as a statement about continued ties between war and religion. Represented by Catharine Clark Gallery in San Francisco. www.alfarrow.com Synagogue made of guns, ammunition and bomb parts. By Al Farrow. www.alfarrow.com Mosque made of guns, ammunition and bomb parts. By Al Farrow. www.alfarrow.com The Tree of Life was made by four Mozambican artists: Cristovao Canhavato (Kester), Hilario Nhatugueja, Fiel dos Santos and Adelino Serafim Maté. It is a product of the Transforming Arms into Tools (TAE) project and is made from decommissioned weapons.

During Mozambique’s civil war, which lasted from 1976 to 1992, millions of guns and other weapons poured into the country and many of them were hidden or buried in the bush. The project is an attempt to eliminate the threat presented by the hidden weapons. Mozambicans are encouraged to hand over weapons in exchange for items like ploughs, bicycles and sewing machines. In one case a whole village gave up its weapons in exchange for a tractor. britishmuseum.org Throne of Weapons was made by the Mozambican artist Cristovao Canhavato (Kester) from weapons collected since the end of the civil war in 1992. In Africa, most people sit on stools, but for tribal heads, princes and kings who have ceremonial chairs. The “Transforming Arms into Tools” organisation supplied the decommissioned weapons. The guns, mostly AK-47 assault rifles, were manufactured in Portugal, Eastern Europe and North Korea. The arms of the chair are made out of Soviet AK47s. The H&K G3 rifles used to form the backrest were designed in Germany and manufactured in Portugal. On the front of the chair is a North Korean manufactured AKM rifle and a single PPSh-43 submachinegun, and the weapons that make up the seat were made in Poland and Czechoslovakia. en.wikipedia.org Image Performance. 50 musical instruments made from destroyed weapons by Pedro Reyes. The Mexican government gave Pedro Reyes 6700 weapons, cut into parts and rendered useless, but to an artist. Reyes is also involved in a campaign where residents hand over their guns in exchange for a coupon which they can then use to buy electronics, garden tools or household appliances. www.pedroreyes.net One of the 50 musical instruments made from destroyed weapons. The Mexican government gave Pedro Reyes 6700 weapons, cut into parts and rendered useless, but to an artist. www.pedroreyes.net Disarm is the second generation of instruments built after Imagine (2012), also using the remnants of weapons that the Mexican army had collected and destroyed. The second series is made up of eight instruments that were created in collaboration with a team of musicians and Cocolab, a media studio in Mexico City. These machines are mechanical musical instruments; they can be programmed and operated via computers, making them capable of performing music concerts with compositions prepared beforehand. Reyes acknowledges: “It’s important to consider that many lives were taken with these weapons, as if a sort of exorcism was taking place,” in the description of his project, “Disarm.” www.pedroreyes.net Palas Por Pistolas is a world-wide campaign to make communities safer. Their mission is to turn weapons into shovels to plant trees. For every weapon that is destroyed one tree is planted. In their first campaign in Culiacán, a city in western Mexico, 1527 guns were melted and made into 1527 shovels to plant 1527 trees. This successful experience lead the way to replicate the project in Ciudad Juarez and they are currently molding 6700 shovels and in the process of planting 6700 trees in bi-national plantings through 2013. palasporpistolas.org

“Don’t Touch” AK-47 by Nancy Fouts.
From the The AKA Peace Exhibition, UK. peaceoneday.org

“Where Souls Dwell” AK-47 by Laila Shawa.
From the The AKA Peace Exhibition, UK. peaceoneday.org Hope and Fear Series, by Mr. Toledano.
“Hope & Fear is the external manifestation of internal desires and paranoia that are adrift in contemporary American society. What are we afraid of? What do we love? How does our society function, and what does it worship?” www.mrtoledano.com GUN series #3, 37 x 17 x 16 inches, welded gun remnants by Victor Hugo Zayas. The metal used to make the sculptures comes from 2.24 tons of guns confiscated and shredded by LAPD. Some were used in crimes, some were found in search warrants, some were illegally owned. After the shredding, the Police made sure no workable parts remained and then turned over the pieces to Mr. Zayas. victorhugozayas.net Over 125,000 weapons were discarded by the Cambodian government after 30 years of war. Sculptor Sasha Constable used the guns to create furniture and sculptures in The Peace Art Project Cambodia (PAPC) in November 2003. sashaconstable.co.uk Gun bike by Kea. Over 125,000 weapons were discarded by the Cambodian government after 30 years of war. The Peace Art Project Cambodia (PAPC) continues to create art, tools and furniture from the decommisioned weapons. sashaconstable.co.uk The Peace Art Project Cambodia utilized weapons seized from a Khmer Rouge weapons cache. Over 125,000 weapons were discarded by the Cambodian government after 30 years of war. The guns were used to create furniture and sculptures. sashaconstable.co.uk David Palmer uses empty bullet casings to create portraits. After making a giant canvas of the casings he uses a blowtorch to shade and darken. bulletproof2011.com “I felt I should be part of shaping peace. And of course, we find in the book of Micah, and the book of Isaiah, where it says they will turn their swords into ploughshares, and people will sit under their trees and nothing will frighten them.” Anglican Bishop Dinis Sengulane. “Episode 98 – Throne of Weapons – transcript”. A History of the World in 100 Objects. BBC, October, 2010.