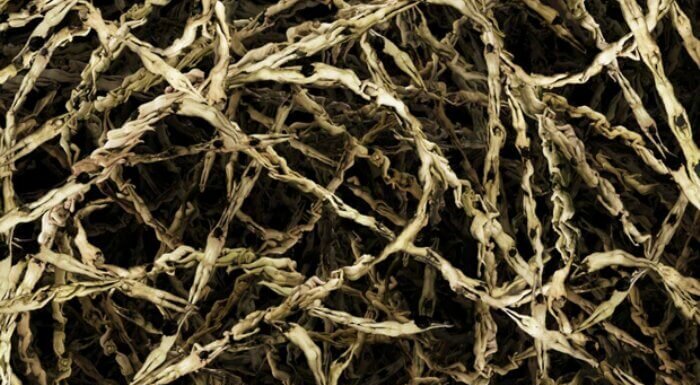 Mimics nature’s structures with the human form…hundreds of models, multiplied millions of times. Angelo was born in Naples, Italy and moved to New York City in 1997.

“He melds bodies like hundreds of brush strokes, creating large compositions that are re-workings of nature’s structures from the XY chromosome to a nurturing ant colony to a gigantic swirling nest.” www.angelomusco.com

Ovum, detail “weaving and connecting masses of nude bodies in mosaics creating constructions that are literal or symbolic representations.”

Xylem, a mystical forest, constructed of a million nude bodies. (A few hundred models, digitally reproduced a million times.) Xylem will be shown for the first time at Art Basil, Miami www.pulseartfair.com

‘Xylem’ is derived from classical Greek, which means wood. In trees, the xylem tissue transports water and nutrients from the roots and soil up to the shoots and leaves.

Ovum’s interweaving of individual bodies became a near obsession in precision and meticulous manipulation culminating in the use of over 2 million bodies.

The making of Xylem, 2011. The production of Xylem project started on June 2010, and finished on June 2011, one full year, 3 photo shoots, and several hundreds of models divided in 3 different locations in New York City.

Angelo’s story:
Turning reality upside down and creating works that run counter to preconceived ideas, is one of Angelo Musco’s strategies. Living structures (ie: nests, amniotic sacs, eggs) both literal and figurative stir a depth of emotion that relates to the artist’s delayed and traumatic birth that left both physical and subconscious scares. The human body is the artist’s medium. He melds bodies like hundreds of brush strokes, creating large compositions that are re-workings of nature’s structures from the XY chromosome to a nurturing ant colony to a gigantic swirling underwater nest.

Born in Naples (Italy) in 1973, the youngest of five children, Angelo Musco, weighed in at 6.5 kilos. Musco’s mother had been having longer and longer pregnancies and larger and larger babies due to an uncommon hormonal dysfunction. She didn’t think anything was wrong and never went to the doctor even thought when she kissed friends she was so large she could not do it face to face and was calling herself a cruise ship.

Giving birth to a baby of nearly fourteen lbs. in the home was complicated and when he became stuck and turning blue, the midwife panicked. Her determined extraction caused serious damage to both mother and baby. His father and uncle ran the newborn to the hospital from their house. Being in a critical state the hospital removed the baby cloths, which the aunt then returned to the Musco household. When his mother saw the soiled cloths she thought the baby had died sending her into a state of shock and it spoilt her breast milk.

Fortunately both mother and son did survive but she was not able to have any more children and young Musco was paralyzed on his right side for the first years of his life. The medical term is Erb’s Palsy, a tearing of the neck, arm and shoulder nerves. It causes permanent damage and diminishes the function of the affected side of the body. An operation to fix the damage was scheduled but when he was sick on the scheduled day, his superstitious mother thought it was a sign not to have the risky procedure. Instead she encouraged her young son with therapy to strengthen and restore the injured side of his body for the first ten years of his life.

His early years were spent in school or at his father’s grocery store helping deliver the daily orders in the neighborhood Barra, just east of Naples. His parents sent him to a private Catholic school because with his weak right side they felt he would need special attention. The school was situated on the water and he was often entertained by the high-speed boat chases as the police hunted down smugglers with black-market contraband like cigarettes. He would draw the boats not realizing how emblematic it was of the dangerous environment of living in Naples in the 70s.

When he started university at the Academia Delle Belle Arti he lived in a small apartment in the historic part of the city, which was very dangerous at that time. This new home was located next to the Napoli Sotteranea, a subterranean second city. The mysticism, history and legends of this old city destroyed by the Vesuvius were an ongoing fascination for the young artist.

For two semesters Musco lived in Granada, Spain as an exchange student. The school was well funded with wonderful labs and equipment for students to use. Musco was not well funded and work serving tea at night in an old Arab Teteria to make money to survive since his family could only afford to cover his rent. Because purchasing materials for painting was also expensive, he started experimenting with installations and different materials such as fire, stones and the bodies of his fellow colleagues. This was the first approach for him using the human body to create his artistic forms.

Back in Naples, Musco, along with a small group of students became very close to a Professor/mentor who took them from the classroom and introduced them to the real Contemporary Art world where they mounted installations, traveled, constantly discussed and explored their artistic selves, while finishing their degrees.

Musco visited New York City a few times for artistic research, and moved to the U.S. December 8, 1997. This date holds symbolic significance because on the Italian calendar it was the day of Immaculate Conception.

In the U.S. he kept developing his work and exploring new media. Recurring themes relate to his difficult birth, confinement, subterranean worlds, and natural architecture. The human body took more and more space in his work often weaving and connecting masses of nude bodies in mosaics creating constructions that are literal or symbolic representations of eggs, nests, amniotic liquid and other inspirations from the miracle of procreation.

About 2005 while researching ideas of pre-birth, Musco realized New York and Naples were on the same latitude. Wanting to explore this coincidence he conceived a video project of short videos with a recurring script happening in eleven different cities around the world all on the 41st parallel. The number eleven relates to the number of months his mother carried him in the womb. An exhaustive trip was mapped out from NYC to Viseu, Portugal, Madrid, Spain, Naples, Italy, Istanbul, Turkey, Baku, Azerbaijan, Beijing, China, Aomori, Japan, the Red Wood Forest, CA, Salt Lake UT, and Lincoln, NE. Unique experiences included filming in the Forbidden City, the threat of a religious commission at the Blue Mosque and seeing firsthand the shocking existence of families living in the oilfields of Baku.

Future projects are taking him to new locations as far away and unique as Vietnam and Cambodia.

Since arriving in the States photo shoots have been held in private and public spaces and have become increasingly more complicated. A photo shoot can become an event onto itself involving volunteers, models, businesses and government institutions. His work and research has evolved over the years leading to an invitation to show his Hadal photo installation at the 53rd annual Venice Biennale.

Musco’s investigation into the power of aggregations found in nature, such as sperm during egg fertilization, an ant colony, beehive or a school of fish, has fueled his most recent works. His visionary translation of such aggregation on a massive scale is not only visible in his work but is also palpable during his photo shoots.