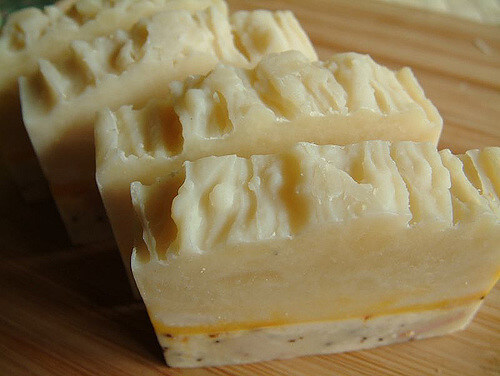 As an urban homesteading enthusiast, I definitely have the DIY bug. Gardening, landscaping, and chickens are all great for outdoor ideas, but in rainy Seattle it’s nice to find an indoor project too. I love all of the crazy scents available at our local farmers market (thai basil & lemongrass?!), that I chose this as my next project to take on.

Soap is far more interesting than you may have thought. Here’s just a few of the facts I found in my research:

How Soap is Made

Commercial soaps aren’t really soap, but a combination of foaming chemicals. Real soap is made with fats and oils that react with lye. Bar soap is usually made with a solid fat like rendered animal fat or coconut oil. Softer soap like castile soap is primarily made with olive oil. Superfatting a soap means adding extra oils for moisturizing. Egyptians, some of the first known soap users, created soap made from animal fat and wood ash.

I wanted to try a variety of options, to create natural soaps that can be safely used around the people and animals in the house, yet still get things clean. With so many varieties to choose from, we split this recipe list into four of the most common DIY methods:

Soap types are listed in order of difficulty, with the easiest processes shown first. *Please note that I have not tried all of these recipes yet, so cannot vouch for the final products.

Melt and pour soaps are an easy process for beginning soap makers to start with. The “melting” consists of melting a pre-existing soap based, which is then “poured” into a ready soap mold. Also called “hot process” soaps, you make these soaps by heating their ingredients in a stove or crockpot.

Melt and Pour Soap recipe and photo by Soap Queen.

Glycerin is sold in craft stores in blocks. This product is then melted down and combined with food coloring and essential oils, creating beautiful and clear blocks of soap. With premade glycerin bars, lye is not needed.

Described as soothing and moisturizing, this soap features vanilla oil, frankincense and myrrh, as well as honey and ground oatmeal. Vanilla Honey Oatmeal Soap recipe by From Nature With Love.

Said to help combat cellulite, this recipe features both coffee grounds and coffee oil, as well as vanilla, whipped cream, and aloe. Coffee and Cream Soap recipe by From Nature With Love.

This natural olive oil soap is ideal for people with skin conditions or allergies. Containing just three ingredients, these bars are created with lye, distilled water, and olive oil.

While all soap contains lye, this old-fashioned recipe may be the ones your grandparents remember. This hot process soap recipe combines lye, water, and a fat such as tallow.

Also called a Double Butter soap by the recipe creator, this luxurious soap combines multiple butters and oils with different melting points, plus fragrance and some mica for sparkle. Shea and Cocoa Butter Soap recipe by David Fisher of About Home.

For those in need of a super fast pumpkin spice fix, this easy melt and pour recipes adds yellow and red food coloring plus (you guessed it) pumpkin pie spice to this premade soap base.

10-Minute Pumpkin Spice Soap recipe and photo by Heidi of Happiness is homemade.

Green chromium oxide provides the color for this aloe-themed soap. Aloe vera powder or aloe vera juice is combined with lemon and lime essential oils, as well as kaolin clay.

Aloe Vera Citrus Soap recipe and photo by Marie of Humblebee & Me.

Tangerine and Neroli Soap recipe and photo by The Soap Kitchen.

An old farm recipe, this pine-based soap is rumored to fix everything from psoriasis to flaky scalp. It’s one of the more difficult hot process soaps to make. Be careful as the pine tar can alter the amount of lye needed, and also cools quickly.

Pine Tar Soap recipe and photo by Jan Berry of The Nerdy Farmwife.

The cold process for soap creation works well at creating hand and body soaps. A more realistic name would be “warm process” soaps, as the chemical reaction between the lye and oils still creates some heat, but the process doesn’t require an external heat source in most room temperatures.

Lard soap is made from rendered animal fat. You can purchase the fat or even render it yourself. Lard creates a creamy white soap bar, loved for both its feel on the skin as well as the affordability of the ingredients.

This cold process soap is actually made in three parts, combining layers of soap base with diluted LabColors periwinkle dye. This specific batch is scented with lavender and cedar.

A nifty 2-tone look is created with lavender ultramarine powder. Add raspberry lemonade fragrance, and a combination of oils including grape seed and rice bran oil.

Nettle Soap with Lime and Spearmint

Check in the back of your pantry for that can of Crisco. Combine this household product with lime and spearmint essential oils, plus nettle leaf powder and dried nettle leaf for decoration.

Nettle Soap with Lime and Spearmint recipe and photo by Angela of Savvy Homemade.

I found this one for bacon-lovers. It’s a cold process if you don’t count cooking and cleaning the bacon grease. Turns out 2 cups of bacon grease makes about 12 bars of soap–that don’t smell like bacon (add your own essential oils).

The key to a good milk soap is frozen milk. Goat’s milk offers an easy balance between fat and lye content, but this process can also be used for cow, buffalo, and even yak milk soaps with some adjustments.

Beer soap is made in a similar manner to milk soaps. The key for these recipes is to work with the beer ahead of time to make sure it’s flat (bubbles are gone) and then freeze the beer before using.

This recipe is ideal for those who love milk soaps but lack the skills to start from scratch. This recipe uses goat’s milk soap suspension formula combined with fresh herbs for a melt and pour soap experience.

This simple recipe mixes pre-made liquid soap with coconut milk and almond oil for a clean and fragrant finish.

Coconut Milk Shampoo and Bodywash recipe and photo by  of Jessica Espinoza and CoconutOil.com.

The author recommends freezing the yogurt to avoid a “milk volcano” in the chemical reaction. Ingredients include rice bran powder, lemongrass, lemon, and white yogurt.

This milk, or should I say, chocolate milk soap combines your choice of milk with cocoa powder and peppermint essential oil.

Best known through commercial brands like Dr. Bronner’s, Castile soap is marked by its liquid consistency and the use of olive oil as a main ingredient. This process uses olive and coconut oils in conjunction with a crock pot and an immersion blender.

Laundry soap is made by heating and mixing a variety of different cleaners, but usually includes fels naptha soap, borax, and sometimes oxyclean or other stain removers.

Laundry Soap recipe and photo by Courtney Craig of HouseLogic.

While this is a liquid soap, I wouldn’t recommend washing with it. Safely get rid of unwanted sugar ants and aphids with this eco-friendly solution. Simply melt Fels Naptha into warm water and mix. Fels Naptha Insecticidal Soap Spray recipe by Ted Swenson of Mother Earth News.