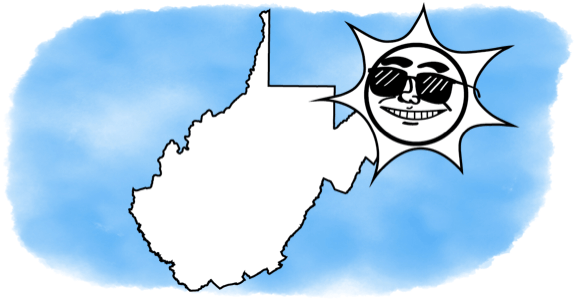 Going solar? Good call. It’s the right choice for your pocketbook and for the climate. If everyone in West Virginia used solar power, it would take 145 billion pounds of carbon out of the atmosphere every year—according to the EPA’s greenhouse gas calculator, that’s the equivalent of planting a forest that would cover an area more than three times the size of the state.

Solar power is a growing part of the energy mix in West Virginia. Nationally, the state ranks #38 in solar energy use.

The biggest advantage of solar energy? The cost—$0. For the average West Virginia household, generating all their own electricity with solar would save $1,298/year. Also, you’re doing a favor for the next generation. Instead of relying on CO2-spewing coal plants, which produce most of West Virginia’s electricity, you’ll be producing your own clean, renewable energy. In West Virginia, residential customers like you account for 23.7% of the state’s total energy consumption.

The disadvantages: The cost of installation. The average solar installation costs around $20,000. Incentives like West Virginia’s net metering program and the U.S. Residential Renewable Energy Tax Credit can bring the overall cost down, over time.

To figure out exactly what you’d need based on where you live in West Virginia—and how much money you’d save—use this solar savings calculator:

West Virginia has low solar capacity, and the state’s leaders have intentionally worsened the policy climate for solar and renewable development in recent years despite formerly having successful pro-renewable policies.

West Virginia, like most states, mandates its utilities to provide customers with net metering. Net metering deducts energy private solar/renewable operators have generated from the total cost of their utility bill and credits those small operators for any excess power generation that goes to the grid at large. However, West Virginia’s net metering rules were weakened by the fossil fuel industry, over the objections of the solar industry.

As of 2017, solar co-ops have been developing throughout WV, educating residents and streamlining the process of going solar. Buying solar panels in bulk will reduce costs and make the switch to renewable resources more accessible.

In March 2017, residents of West Virginia discussed the use of solar panels on degraded land. The project is viewed as an opportunity to provide jobs throughout the state.

In April 2017, the owner of a Shepherdstown solar company named Solar Holler expressed his desire to hire out-of-work coal workers. The learning facility Coalfield has partnered with Solar Holler to provide the workers training in solar.

The West Virginia Sierra Club advocated against the repeal of the renewable standard and the net metering changes.

WV SUN educates the public on the benefits of solar and advocates for pro-solar policy.