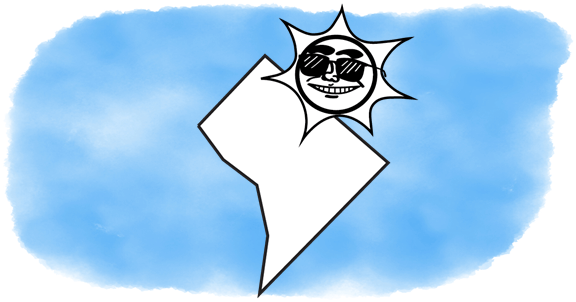 Going solar? Good call. It’s the right choice for your pocketbook and for the climate. If everyone in District of Columbia used solar power, it would take 88 million pounds of carbon out of the atmosphere every year—according to the EPA’s greenhouse gas calculator, that’s the equivalent of planting a forest that would cover 75% of the district.

Solar power is a growing part of the energy mix in District of Columbia. Among major South-Atlantic cities, the District has the 2nd-most solar capacity.

The biggest advantage of solar energy? The cost—$0. For the average District of Columbia household, generating all their own electricity with solar would save $1,103/year. Also, you’re doing a favor for the next generation. Instead of relying on natural gas plants, supplied by fracking and offshore drilling, which produce most of District of Columbia’s electricity, you’ll be producing your own clean, renewable energy. In District of Columbia, residential customers like you account for 21.6% of the state’s total energy consumption.

The disadvantages: The cost of installation. The average solar installation costs around $20,000. Incentives like the U.S. Residential Renewable Energy Tax Credit can bring the overall cost down, over time. You may even be able to get solar at no cost at all. The District’s Affordable Solar Program covers the full cost of solar installation for eligible homeowners.

To figure out exactly what you’d need based on where you live in the District—and how much money you’d save—use this solar saving calculator:

Washington, D.C. is a leader in the solar industry, committed to an aggressive goal for solar production that could be a model for the world.

The “Solar for All” bill, passed in July 2016, requires the city to generate 50% of its energy from renewable sources by 2032. Further, 5% of that total must come from solar. Mayor Muriel Bowser said that the bill will “extend the benefits of solar power to many diverse populations – our seniors, our local small businesses, our nonprofits, and our residents and families living on a fixed income.”

One very notable D.C. building is already working toward that goal—solar panels were installed in the White House in August 2013.

A planned renovation of the National Air & Space museum will add more than 1,000 solar panels to the building’s roof.

Atlas Brew Works, a neighborhood production brewery in Northeast D.C., is a 100% solar-powered brewery. “We are all looking forward to enjoying locally crafted 100% solar powered beer!’ said Ben Breiterman, COO of Solar Solution, who did the installation. Atlas maintains a site where you can see their hour-by-hour energy production.

In June 2017, the Solar Works DC program was launched. The program will run for three years and focuses on training and implementing solar energy into homes of low-income families.

By the end of 2017, Verizon Center will have 25% of their energy needs supplied by solar. The solar power comes from a 4.7 kW plant in Frederick County.

In June 2017, Mayor Muriel Bowser announced plans to install a 884 kW solar project in the future Audi Field soccer stadium. The solar array is expected to supply about 33% of the stadium’s energy needs.

Washington D.C. is home to the leading industry groups and non-profits advocating for solar energy use around the nation.

The Solar Energy Industries Association represents solar manufacturers and installers in the halls of Congress.

On a local level, DC Solar United Neighborhoods (or DC SUN) helps residents of the city band together to do a bulk solar purchase for their neighborhood. Eight neighborhoods have signed up since 2013.