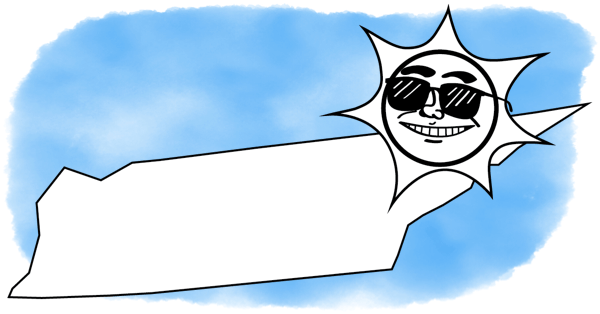 Going solar? Good call. It’s the right choice for your pocketbook and for the climate. If everyone in Tennessee used solar power, it would take 85 billion pounds of carbon out of the atmosphere every year—according to the EPA’s greenhouse gas calculator, that’s the equivalent of planting a forest that would cover all of the state.

Solar power is a growing part of the energy mix in Tennessee. Nationally, the state ranks #31 in solar energy use.

The biggest advantage of solar energy? The cost—$0. For the average Tennessee household, generating all their own electricity with solar would save $1,593/year. Also, you’re doing a favor for the next generation. Instead of relying on CO2-spewing coal plants and dangerous nuclear plants, which produce most of Tennessee’s electricity, you’ll be producing your own clean, renewable energy. In Tennessee, residential customers like you account for 25.6% of the state’s total energy consumption.

The disadvantages: The cost of installation. The average solar installation costs around $20,000. Incentives like the U.S. Residential Renewable Energy Tax Credit can bring the overall cost down, over time. Tennessee state law also allows property easements to permit access to direct sunlight.

The average Tennessee family uses 42,867 watts of energy on an average day. And, on average, they’ll get 4.5 hours of sweet Tennessee sun each day. So, to get enough energy to keep the power running all night, they’ll need their solar power array to generate 9,526 watts of energy per hour while the sun’s out.

To figure out exactly what you’d need based on where you live in Tennessee—and how much money you’d save—use this solar savings calculator:

Tennessee has a substantial utility level solar industry, but does not have much in the way of small scale or residential solar installations.

Tennessee does not have a renewable energy portfolio standard or net metering, the two most common and effective state level policies used to develop solar energy.

As the primary state in the federal Tennessee Valley Authority’s service area, Tennessee does have a strong set of local, if not state, green incentives. The TVA offers a program similar to net metering to its customers.

The TVA announced plans for a 53 MW solar facility at Naval Support Activity Mid-South, a Navy facility in Millington. The array will be the state’s largest.

In June 2017, a New Market solar project was planned that would be the biggest in East Tennessee, covering 200 acres.

Opening in 2017, the new welcome center for Memphis is designed to be net-zero with rooftop solar panels.

In April 2017, the Tennessee Valley Authority announced they will be building a solar power facility at the Allen combined cycle gas site, set to start producing energy in September.

The Tennessee Solar Energy Association is a state chapter of the American Solar Energy Society. It advocates for pro-solar policy on the state level.