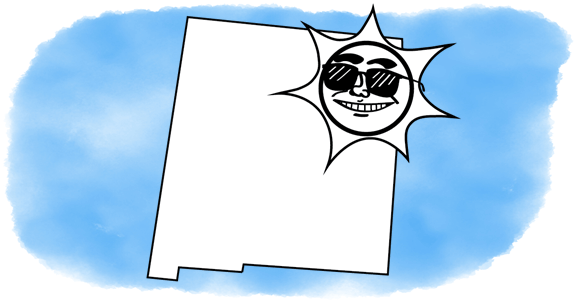 Going solar? Good call. It’s the right choice for your pocketbook and for the climate. If everyone in New Mexico used solar power, it would take 65 billion pounds of carbon out of the atmosphere every year—according to the EPA’s greenhouse gas calculator, that’s the equivalent of planting a forest that would cover nearly one-third of the state.

Solar power is a growing part of the energy mix in New Mexico. Nationally, the state ranks #10 in solar energy use.

The biggest advantage of solar energy? The cost—$0. For the average New Mexico household, generating all their own electricity with solar would save $933/year. Also, you’re doing a favor for the next generation. Instead of relying on CO2-spewing coal plants, which produce most of New Mexico’s electricity, you’ll be producing your own clean, renewable energy. In New Mexico, residential customers like you account for 17.3% of the state’s total energy consumption.

The disadvantages: The cost of installation. The average solar installation costs around $20,000. Incentives like the U.S. Residential Renewable Energy Tax Credit can bring the overall cost down. New Mexico offers a tax rebate of up to $9,000 for folks who install solar. Residential solar systems are also exempt from property tax in the state.

The average New Mexico family uses 21,100 watts of energy on an average day. And, on average, they’ll get 4 hours of sweet New Mexico sun each day. So, to get enough energy to keep the power running all night, they’ll need their solar power array to generate 5,275 watts of energy per hour while the sun’s out.

To figure out exactly what you’d need based on where you live in New Mexico—and how much money you’d save—use this solar savings calculator:

New Mexico has high solar potential that it has yet to develop; its solid renewable policies should allow the solar industry to expand there.

New Mexico’s renewable energy portfolio standard requires 4% of its total energy sales come from solar sources by 2020. Renewables are required to be 20% of investor owned utilities fuel mix by 2020.

New Mexico, like most states, mandates net metering from its utilities. Net metering deducts energy private solar/renewable operators have generated from the total cost of their utility bill and credits those small operators for any excess power generation that goes to the grid at large. New Mexico has acted to keep net metering affordable for solar users.

The state’s signature pro-solar measure is a tax credit for solar equipment.

In September 2016, Albuquerque’s city council passed a resolution setting a goal of 25% of the city government’s energy coming from solar by 2025.

Facebook was deciding whether to build its new data center in New Mexico or Utah—it hoped to power the facility entirely with renewable energy, and is looking for assistance from both states. The data center will require at least 30 MW of power, with more capacity needed as it expands. In February 2017, Facebook announced a plan to move their data center to New Mexico. The facility will only use renewable energy, causing solar companies to bid for the 30 MW project.

In December 2016, Kit Carson Cooperative Electric of Taos announced that by 2022, they’ll be able to power all their customers with local solar energy on sunny days.

In April 2017, Caprock solar plant became operational. The solar farm is located near Tucumcari and is able to produce 25 MW of solar energy.

In April 2017, Land was approved by Torrance County Commission for a solar project off Highway 41 in Torrance County. The solar farm will be able to produce 2 MW of solar power.